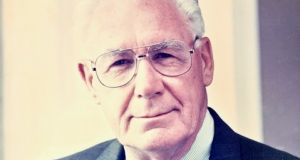 Ian Howie: his third-level career began at the University of St Andrew’s in Scotland, where he graduated with first-class honours in zoology.

The genial, Scottish-born, Trinity College professor and former vice-provost Ian Howie, who has died just two months before his 90th birthday, will be remembered not only for his immense contribution to the Dublin university but also for his outstanding work in a voluntary capacity elsewhere.

For 30 years, from 1972 until 2002, he served as chairman of the board of St James’s Hospital in Dublin, initially every second year and then continuously from 1984. During that time, he oversaw a remarkable redevelopment of the site, as some of the Federated Dublin Voluntary Hospitals associated with Trinity were merged with St James’s into one major teaching hospital.

It proved to be a highly complex process with the smaller hospitals – Sir Patrick Dun’s, Mercer’s, Baggot Street and Dr Steevens’s – being shut quickly during the 1980s economic downturn and having to transfer services before the new hospital came on stream, resulting in St James’s becoming very overcrowded.

Work began on the first phase of the new hospital in 1984 and it was handed over in 1988. However, because of the bleak national economic situation, patients did not move into the new 291-bed accommodation until 1992.

Prof Davis Coakley, a former consultant at St James’s and professor of medical gerontology in TCD, who served on the St James’s board with Howie, remembers him as a man of “great natural dignity”, who was highly respected by all who worked with him.

“He was a very good listener and when faced with complex problems and conflicts he did his best to be fair to all those involved. He was warm and friendly and he was quick to see the humour in a situation but he could also be a strong adversary, most particularly if he perceived that the interests of St James’s Hospital were at stake.”

People were inspired by his commitment and vision, Coakley adds, and he was widely acknowledged as the principal driving force behind the success of the modern St James’s.

Prof Thomas Mitchell, who succeeded Howie as St James’s chairman, paid tribute in the 2002 annual report to his “tireless work for the hospital”, describing it as “an inspiring example of a generous civic spirit and of the importance of voluntarism to the effective working of our public services”.

Howie’s third-level career began at the University of St Andrew’s in Scotland, where he graduated with first-class honours in zoology and stayed on to complete his doctorate in the study of invertebrates at its Gatty Marine Laboratory. When he was offered an assistant lectureship in zoology at Trinity College in 1953, he told his wife, Maimie, who was expecting their first child, that she would like Dublin because “it’s warm”.

He was referring to the city’s slightly more temperate climate than that of their native Edinburgh, where they both grew up as only children. They met at the age of 15 when their respective single-sex schools collaborated for a musical performance. Asked to link arms during a rendition of All We Like Sheep Have Gone Astray from Handel’s Messiah, it was a pairing that was to be inseparable and mutually enriching over the next 75 years.

The Howies expected to stay in Ireland for about three years but they loved it so much here, they never wanted to leave. Having been elected as a fellow of Trinity in 1964, he became registrar of the college, during which time he was at the centre of negotiations to merge Trinity with University College Dublin – an initiative that was launched in 1967 by the then education minister Donogh O’Malley.

While the two universities successfully resisted the political pressure to become one, Howie was closely involved in streamlining of some subjects during the 1970s, with veterinary science being offered exclusively in UCD, while dentistry and pharmacy were assimilated into Trinity.

He was narrowly defeated in the 1974 election of provost by Prof FSL Lyons, who then appointed him as the college’s 60th vice-provost for the next seven years. An associate professor of zoology, Howie headed the department of zoology from 1988 until he retired on September 30th, 1994.

“His shrewdness, always touched with warm humanity, was ideal for running a large institution,” said Presbyterian minister Rev Denis Campbell in a tribute at his funeral. “He was a good team player and could negotiate his way around difficulties and obstacles, always with goodwill.”

His wide span of recreational interests, ranging from overseas travel, fly-fishing and golf, being a long-time member of Carrickmines Golf Club, to cricket, membership of the MCC at Lord’s, rugby and art, reflected his joyful embrace of life, at the centre of which was always his family.

At the awarding of an honorary degree to Howie in Trinity in 1998, Prof John Luce’s citation outlined his achievements within the college before going on to talk about the “even loftier monument to his endeavours” being the extended St James’s Hospital complex, adding: “It was his sweat, and his tears, that won most of the victories.”