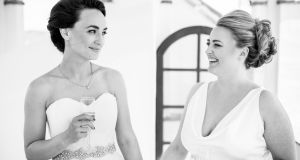 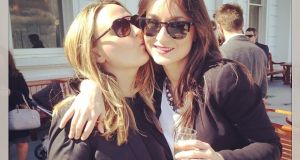 The civil service in Dublin April 2014

I met Michelle in a gay bar on South Great George’s Street in Dublin in 2005. Seven years later, on a moonlit beach in Spain, she proposed to me in writing in the sand. Then, on a cold and Christmassy night back home, I asked her to marry me using a giant projection on the side of a building.

“Will you civil partner me?” just never had a ring to it. We said marry, we meant marry and we wanted to be married. But where most couples will only ever have one ceremony to make that happen, we ended up having three.

In April 2014, in the small registry office on Grand Canal Street in Dublin, we gathered a group of close friends and family for the first of these ceremonies, our civil partnership. We signed the paperwork and said the words. On a sunny afternoon, we celebrated with a meal in a yacht club in Dún Laoghaire. I didn’t think that I would feel different after the civil partnership, but I did. I felt safer somehow.

Once “civil partnered”, we wanted to be married. Like many couples, we wanted a full wedding ceremony and celebration alongside all our friends and family. It was 2014, and the groundswell of support for marriage equality was yet to come about. We knew in our hearts it was a case of when, rather than if, we would be able to marry in Ireland, but we couldn’t wait.

We were drawn to Spain, because gay marriage is legal there, but also as we thought a Spanish union might one day be recognised in Ireland before Irish civil marriage was introduced. It turned out things were far more complex than we had thought. All the same, Spain seemed like the perfect place for the kind of wedding we wanted, so we forged ahead.

The wedding was in a big old hacienda in the hills of the Costa del Sol. My over-riding memory of the day is climbing a tower in the hacienda as our guests arrived by bus and watching them pick their way through the gardens to the marquee. The ceremony took place outdoors, where friends and family recited poems and songs before our mothers lit candles, and we exchanged vows. It was simple.

Afterwards, as we sipped on Cava in the sunshine, we felt so lucky, not least that so many people had travelled to be part of our big day – a diverse group of people from all parts of our lives, there to show their support and celebrate with us.

Later, there was singing, dancing and cheering on chairs as we were introduced to one of our favourite songs, Loreen’s Euphoria. That set the tone and ensured a lively party atmosphere for the rest of the day. Our best man David nailed his job as compere and gave Michelle the roasting of her life. It was the only time I have ever heard cries for the best man speech to keep going.

There was then a joint hilarious speech from two of my bridesmaids, which walked a fine line between making me cry and cringe. Michelle’s mum said some beautiful words, and then my dad started his father-of-(one of the)-bride(s) contribution by explaining what happens when you Google “what not to say at a gay wedding”. There were millions of results, he said. Sign of the times.

The food was everything we loved about Spain: fresh shellfish, smoky meats, colourful plates of salty, fruity food. We danced into the night and bounced out of bed the next day for cocktails, a barbecue and pool party. It couldn’t have been better.

On April 6th this year, almost one year after the marriage referendum, Michelle and I went back to the registry office on Grand Canal Street.

We invited a handful of friends and family to come along, but we kept it low-key. It was only two years since we had exchanged civil partnership vows in the same room. Everything seemed the same, but different. We had participated in the campaign for marriage equality, and so many of our friends and family – regardless of sexual orientation – had done the same. Ireland had come through for us. Now we felt like equally cherished citizens.

The wedding in Spain was everything we could have dreamed of, but this low-key marriage ceremony in our home town was what we really needed. It felt like we were celebrating the right to marry rather than our marriage, which we had so thoroughly celebrated already.

After the ceremony, we went for a low-key brunch along the canal and spent the afternoon chatting in O’Brien’s pub. This time, I drank water in place of Cava on account of a very special guest. My bump had peeped out over my lap as we finally signed our marriage papers.