The Yes Woman: Why I’m searching for a sense of self at Al-Anon meetings 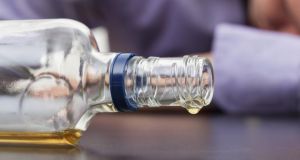 ‘Growing up amid alcoholism gave me a broken sense of self.’ Photograph: Thinkstock

This week, I’ve undertaken a very personal challenge. Growing up amid alcoholism creates obvious psychological consequences. After the breakdown of my parents’ marriage, my mother encouraged us to see a counsellor. I refused.

In my teens, she encouraged me to go to Al Aateen, the support group for teens living with an addict in the family. Again I refused. Although I was deeply scarred by the abandonment of my father, I preferred to allow my grief to curl around me to the point of strangulation, believing the similar experiences of others could not have an impact on mine. Thinking myself beyond comfort and beyond love, I retreated into isolation.

In my 20s I sought help in dealing with that acute sense of loss and worthlessness, but never in a group setting.

In the spirit of opening myself to new experiences, I’ve been attending Al-Anon meetings for the past several weeks. There, people who are dealing with or have dealt with an addict come to air their experiences and frustrations. They attempt to come to terms with the addiction of their loved ones. Some come simply to seek help as they attempt to keep themselves from perishing inside the atmosphere of terror, guilt and resentment they are trapped in.

Love is not unconditional

Living with an addict has taught me one important lesson: love is not unconditional. Although I loved my father when I was small, my life with him eviscerated that attachment. Love must be mutual. Years of selfish or abusive behaviour from someone makes you feel unlovable. With time and thought, you realise you are not unlovable, rather your abuser simply does not love you. This is a crushing realisation. However, seeking the approval of such a person is not love, but a deep desire for destruction.

Like a seedling trying to find light in the dark, I thrashed and twisted in the direction of my father, endlessly seeking. Over time, what resulted was a colourless, malformed plant, bent double by the force that starved it of nourishment. I could not form a sense of self around the love and values my father imparted, for there were none. So I became a void.

As the adult child of an addict, that broken sense of self is what I brought into relationships with others. Seeking help allowed me to come to an understanding of my experience and to gain a healthy sense of self. I’m older now, and Christmas is approaching. It is a time when your connection (or lack thereof) to others is reflected back at you everywhere you look. It is also a time when the real tension in families can be at its most acute. There is someone like my father in almost every extended Irish family. Many children this Christmas will open gifts in a tense, confusing environment, either mourning the absence of a family member, or watching them retreat into themselves and inebriation – again – on a supposedly joyous day.

When I was at a recent Al-Anon meeting in Dublin, a woman stood up. Let’s call her June. She spoke of her struggle with her son. She felt herself losing him to addiction as his father before him had been lost. The boy was consumed by rage and loss, as I was at his age. He stole from June. He threatened her. Once, he broke her finger. He said it was an accident.

Overwhelmed by a sense of failure and guilt, she said she had enabled him but could do it no longer. Although the thought tortured her, she was going to turn him out until he would agree to treatment. “I can only hope he’ll realise that no one can save him but himself.” She sat down and put her head in her hands.

Afterwards, June had a cup of tea and a Marietta biscuit, and went reluctantly home to goodness knows what. Something about the banality of a Marietta biscuit made it all the more upsetting. I felt again the small, broken child inside myself, stirring in restless loss. I realised, as I have many times in adulthood, that I am condemned always to mourn the loss, not of my father, but of the good father I, like all children, should have had. The only gratifying aspect was for me a selfish one: I came to realise some time ago that I can manage my sense of grief and disappointment. It took years, but I have learned my own worth. I hope June learns hers.

The Yes Woman says yes to . . . taking comfort in others . . . and no to . . . accepting someone else’s assessment of your worth

‘Pilates made me more aware of how my body works’
3

What are your funeral options if you don’t believe in God?
10