The last ‘witch’ executed in Boston was an Irish speaker

Broadside: The Irish emigrant, with the ‘strangely afflicted’ children, is remembered on Goody Glover Day 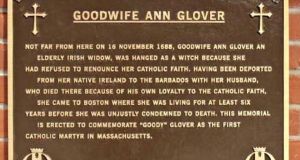 A plaque commemorating Ann “Goody” Glover near the site of her hanging in Boston in 1688.

America’s deepest Halloween roots are found in Massachusetts, where, during the late-17th-century outbreak of witch hysteria among its Puritan settlers, dozens of lives were terminated or otherwise ruined. Though most accused witches – and their accusers – were of Puritan stock, the last witch executed in Boston was an Irishwoman, Ann “Goody” Glover.

Glover’s year of birth remains unclear. During Cromwell’s occupation of Ireland, she and her husband were deported to Barbados, where the husband died. Sometime around 1680, she and her daughter, Mary, were brought to work in Boston, where they became part of what then was a tiny, and largely detested, Catholic minority.

The Glovers survived by washing the clothes of Puritan families who unsuccessfully tried to convert them to the Puritan faith. They then worked as housekeepers for a family called Goodwin. Eventually a dispute took place over allegations that Glover’s daughter had stolen clothes belonging to the Goodwins.

As a result of this dispute, Glover and her daughter were relieved of their position with the Goodwins. Then, in the summer of 1688, four of the Goodwin children began showing signs of a strange affliction. They complained of sudden pains in various parts of their bodies.

The children’s cries were “piteous and shrill, and the shifting of the pain from one [body] part to another was constant and inexplicable,” according to James Bernard Cullen’s 1889 work The Story of the Irish in Boston, which describes the purportedly ailing Goodwin children as being like “soldiers at a drill”.

Most historians believe the children faked their afflictions, but in a colonial climate obsessed with witchcraft and the assumed near-constant presence of Satan, the show they put on had serious consequences. The doctor who examined the Goodwin children concluded that witchcraft was to blame, and the Goodwins had a pretty good idea as to the witch’s identity.

Goody Glover was put in chains and sent to Boston’s jail, where she awaited trial for practicing witchcraft. Such trials were often hopeless for the defendant, and in Glover’s case this was especially so, as she was resented by the Puritan colonials for being Irish and an “idolatrous Roman Catholick”, as phrased by Cotton Mather, a Puritan icon and Boston’s leading preacher of the era.

According to Mather’s account, Glover “understood English very well” but either refused to speak it or had a spell put on her by “another witch” to prevent her from revealing too much. Others have doubted that she knew much of the English language.

When commanded to recite the Our Father at her trial, she recited the prayer in a mix of Gaelic and broken Latin. One of her few supporters in the community, an English merchant named Robert Calef, wrote that, “Her behaviour at her trial was like that of one distracted. They did her cruel.”

In his 1890 History of New England, John A Palfrey provides a somewhat sympathetic, if slightly condescending, account of Glover, “the poor washerwoman”, “defending herself unskilfully in her foreign gibberish [also known as Gaelic]”.

Glover was convicted and sentenced to hang. The night before her execution, she was visited in jail by Cotton Mather, who wanted to ask her if she wished to be prayed for. Mather later wrote of the encounter and complained that Glover “entertained [him] with nothing but Irish”.

Though many outlets say that Glover was hanged on Boston Common, George Francis O’Dwyer, who authored the 1921 article ‘Ann Glover: First Martyr to the Faith in New England’, places the hanging, on November 16th, 1688, about one kilometre away, in Boston’s South End neighbourhood, at the current site of Holy Cross Cathedral, the city’s flagship Catholic church.

The crowd heckled her to the bitter end, and her body was left hanging, as a warning to anyone else who might have considered partaking in witchcraft. The ordeal was all too much for Glover’s daughter, who suffered a mental breakdown and soon after died as a “raving maniac”, according to O’Dwyer.

Though Goody Glover was the last person hanged for witchcraft in Boston, four years later, some 25 kilometres up the road in Salem, the Puritan witchcraft obsession would explode into a full-blown hysteria that sent 19 “witches” to the gallows within a span of several months.

In 1988, to mark the tercentenary of her execution, the Boston City Council declared November 16th “Goody Glover Day”.

The best gourmet getaways in Ireland this summer
6

Creches reopen: ‘It was fantastic to just stand and hear the 22 kids playing’
10