The Halawa sisters: ‘We didn’t have a pebble to defend ourselves with’

Ahead of the trial of their teenage brother Ibrahim next week, the Halawa sisters who were detained with him in Egypt last year recall what happened

Dubliner Ibrahim Halawa (20) faces charges of terrorism in Egypt after being detained in Cairo in 2013. In an interview with The Irish Times in 2014, his sisters Soumaia and Omaima talked about conditions in prison and his letters home. 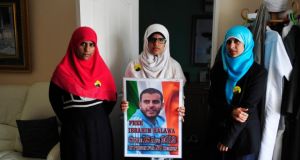 At home in Dublin are Omaima, Fatima and Somaia Halawa, sisters of Ibrahim Halawa (18), who faces trial in Egypt next week. Photograph: Aidan Crawley

Last summer the Halawa family took their usual trip to Cairo. Sisters Somaia (28), Fatima (23) and Omaima (21) went for work experience. Ibrahim (18) intended to relax after his Leaving Cert. They would see relatives during Ramadan. Their return flight to Dublin was booked for August.

In July they were swept up in demonstrations against the deposing of President Mohamed Morsi, and in August they were arrested and detained. Ibrahim is in prison awaiting trial next Wednesday, July 16th. The women returned to Dublin after being released on bail on November 16th. They will be tried in absentia with 483 others.

They want to see Ibrahim freed urgently, because after their own three months of detention, they know how inhumane the conditions are.

Somaia and Fatima are sitting in the sun at the Clonskeagh mosque where their father, Sheikh Hussein Halawa, is imam. Somaia is starting a master’s in education in UCD. Omaima is studying digital media. Fatima has stayed at home in Firhouse. She sustained wounds on her legs from rubber bullets. “She sometimes doesn’t like to talk about what happened,” says Somaia.

The family, which also includes three older siblings, moved here 20 years ago. Ibrahim was born in Dublin. They don’t have many friends in Cairo. “We never cared about politics. We’d leave the room when my dad was watching news,” says Omaima. But when clashes between pro- and anti-Morsi demonstrators broke out in June last year, they felt compelled to have a look.

The siblings joined sit-ins on July 3rd, the day Morsi, Egypt’s first democratically elected head of state, was deposed in a military coup. “We went to Rabaa Square,” says Omaima. “We wanted to see for our own eyes instead of listening to the media.”

There they saw peaceful protests. There were people of different ages, religions and nationalities as well as supporters of Morsi’s party, the Muslim Brotherhood. They worked in the media and Egyptians Abroad tents, where they met Pat Breen, a TD for Clare, with a delegation from the Department of Foreign Affairs.

Their house is a 30-minute taxi ride away, so they often slept in the Rabaa mosque on Ramses Square. They didn’t fully support Morsi but they gathered that he was a clean-handed leader who hadn’t harmed people.

On Wednesday, August 14th, the army opened fire on Rabaa Square during dawn prayer, and the Halawas saw friends being killed, while Fatima was hit with rubber bullets. On Friday, they went home. And they went back out. They joined another peaceful protest at Ramses square in the centre of Cairo. The army launched a savage crackdown, and the Halawas, surrounded by masked men with machine guns, followed some 900 others to the Al-Fateh mosque for safety. It was the worst place to end up.

On Friday, August 16th, came the second Rabaa massacre. Troops besieged the mosque and killed and burned more than 1,000 people, some of them alive. Machine guns, snipers and tear gas were used. “Until now, that picture is still in front of our eyes,” says Somaia, a Montessori schoolteacher. “All we could see were burned bodies and burned faces. There was a baby that was born in Rabaa, but killed also in the massacre.”

The women couldn’t tell the police from the thugs or the baltageya deployed by the army. Omaima was “put on the ground and stripped naked, sexually harassed, and the security forces just stood there. I was so close to being raped. That’s after [the police] beat us with their fists, with their guns, with metal.”

The Halawas say they weren’t armed at any point. “We ourselves wouldn’t have joined in if there were any weapons involved. My sister [Fatima] was injured that day. We didn’t have even a pebble to defend ourselves with,” says Omaima.

They were arrested, along with 600 others, and herded into police vans so packed that their tyres burst. Then to the notorious Torah military camp, where they stayed four nights in squalor they are hesitant to talk about.

“We were only allowed to go to the toilet once a day,” says Omaima. “The bathrooms I can’t describe. The whole floor was a toilet. We had no shoes, so we had to walk on the hot sand on our feet.” They were refused water, and thrown bread covered in insects. Ibrahim was in a nearby cell with hundreds of men, some bleeding and infected, all calling for air.

Thirty other women detained with them were released in Torah; the Halawas were kept because they lived abroad. They were taken to al-Salam military camp, to an underground cell “like a grave”, and then to Al-Kanatir, Egypt’s largest women’s prison. Later, Ibrahim was moved to Al-Marg prison.

At Al-Kanatir the three sisters shared a metal bed with no mattress on bunks of three. They were deprived of fresh air. Food was, says Somaia, “animal food. What they do, they bring a container on the ground. All you can see are the birds and the cats around it.”

They drank water from the bathroom tap until their mother came. Amina Mostafa went between Ibrahim’s and their prison. She ate breakfast with them and kept them mentally strong. She brought novels, copies of the Koran and supplies for the week. She is still in Cairo visiting Ibrahim. “Her heart is broken,” a friend says.

They describe their detention as “mental torture”: they say the guards beat the men to frighten the women; once they were told they were going home, but it was a trick; a prison guard opened the rice their mother had brought and searched though it with his fingers.

“Being with criminals for me was the worst thing ever,” says Somaia. Today they can see a bleakly comic side, and they laugh as they describe “Mama”, who was serving a life sentence for murder in the next cell. “She’s in charge of you. She controls your movements, what you eat, how you eat it,” says Omaima. They gave her money, cigarettes, food parcels and swept her cell. “If you missed a spot, she gave out,” says Somaia.

The Halawa women were refused a lawyer while in prison. Sixteen charges were held against the four Halawas, including killing protesters, burning Al-Azbakia police station and being part of a terrorist organisation. The police station was burned while they were trapped in the mosque. They aren’t part of the Muslim Brotherhood, now categorised as a terrorist organisation, and say none of their family are.

Going to hearings gave them joy, as they would see their brother. Once they exchanged letters and treats from home: Cadbury Caramel and Moro bars, Skittles and Arabic lollipops. “We would be happy just to see our brother. We just were laughing at what was going on,” says Somaia.

No regrets about protests

They do not regret returning to protest on Friday 16th. They say they could not stay at home having seen defenceless people massacred. “Growing up in Ireland, we knew we can’t accept such a thing. It’s about being raised to respect human rights, and we go out and follow that path,” says Omaima.

Ibrahim wants to repeat his Leaving Cert because he didn’t get enough points for engineering. The girls beam when they talk about him, a funny, mature teenager who loves singing, reading and comics. “He has this leadership personality. In the mosque, when they threw tear gas on us, he pushed us on the wall and wrapped his whole body around us,” says Omaima.

Ibrahim Halawa could face a harsh sentence next week. Joe Costello, Minister of State at the Department of Foreign Affairs says they have “pulled out all the stops to an inordinate degree” in his case.

School closure might be a dream for some children, but it is a nightmare for others
7