Syrian children get behind the lens to show life as refugees 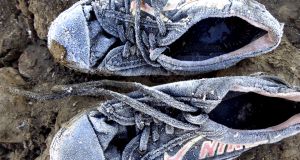 Maya Rostam (aged 12 at the time) took a picture of the sneakers she wore when her family walked from Syria to Iraq to escape the war. Credit: Maya Rostam / Reza Visual Academy 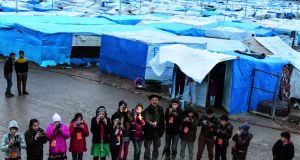 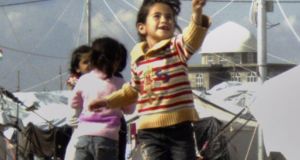 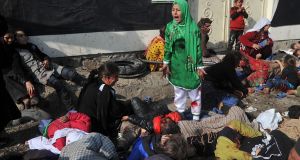 When Maya Rostam first asked her mother if she could join a new photography course at Kawergosk refugee camp, where they lived, she got a resounding no. “I said, ‘Look, you have school and other things you need to do,’ ” says her mother, Jamila Mohammed Amin.

The course Rostam wanted to take was organised for schoolchildren at Kawergosk, which is in Iraqi Kurdistan, by the renowned French-Iranian photojournalist Reza Deghati. Eventually the girl persuaded her mother and joined the project, called Exile Voices. At the age of 12 she was one of the younger participants.

The classroom is a trailer on the edge of the sprawling camp outside Erbil, the capital of Iraqi Kurdistan. More than 10,000 Syrian refugees live there, including 2,000 school-age children. Most arrived in 2013 but still live in temporary shelters, in a sea of blue-and-white tarpaulin that covers 1,000sq km. “Most of these people lost everything they had in a day,” says Deghati, who is more commonly known only by his first name.

The floor of the Rostam home is a slab of concrete. The walls are sheets of plastic, in some places reinforced with wood. Children play in the muddy streets outside.

Foreign journalists and photographers frequently report from Kawergosk, as well as from dozens of other refugee camps across the region. “Until now the story is almost always told by us, a foreigner,” Reza says. “I would like to see the story told by those that lived the story.”

His goal is therefore to train the young people to capture their lives in ways that a visitor never could. He started the class in Kawergosk in 2013, donating cameras for 20 students. More wanted to join, but there wasn’t enough equipment or space.

Since then the young photographers have trained their lenses on their daily routines: children bathing in a styrofoam cooler, or running on the rocky soil among rows of tents; refugees eating and studying by the light of small lanterns.

On her first day Rostam photographed the trainers she wore when her family walked from Syria to Iraq, to escape the war. In the photograph, which she took early in the morning, the shoes are covered with frost after spending the night outside. She showed up late for the class because she had to wait to put them on. It’s exactly the kind of powerful image that Reza was looking for.

The inspiration for the project came long before the Syrian war started. In 1983 Reza was in Pakistan, covering the influx of refugees fleeing Afghanistan. He started teaching young people in a camp to take photographs and to create their own narrative about living in exile. He says that the Afghans “were telling a different story” from that of the media.

In the decades since then Reza has run similar programmes across the world, in Sudan, South Africa and now Iraq. He calls his nonprofit organisation Reza Visual Academy. So far he has provided most of the funding and says the most difficult part is finding the support to continue.

Hossaini is a role model for many of the students here, including 12-year-old Nalin Bashar. “I liked photos from the beginning,” she says. “My dream is to be a big journalist.”

Bashar scrolled through her photographs with Mohammad Qaddri, another Syrian refugee and former English teacher who works with the students in Reza’s absence. She showed him pictures of her friends and a recent family picnic. “This is a nice photo,” Qaddri said, looking at a shot of the camp at sunset. “But here the sun should be on the other side.”

Some of the students’ photographs made it all the way to Paris. From July to October 2015 they were plastered on the banks of the Seine, opposite the Musée d’Orsay, as part of an exhibition entitled Rêve d’Humanité. It was organised to highlight the work of the United Nations Refugee Agency and sponsored by the HIPA photography foundation.

“The camera opened her eyes to the world,” says Amin. “She became willing to learn new things.”

All the children participating in the programme are now getting top marks at school, Reza says. Many have also enrolled in English classes in the camp. He would like to see students from different countries, backgrounds and experiences to one day form their own international network or photographic agency. In the past year he has started two more programmes in refugee camps in northern Iraq, and he would like to expand the project to Syrian camps in Turkey, Lebanon and Jordan.

“Through this project we brought a smile,” Reza says. “These kids don’t feel like they are refugees anymore.”