So gender quotas are sexist? What nonsense | Emer O’Toole

If I were a man sitting in the Dáil and I knew the only reason I’d got there was because of the special privileges my gender affords me, I’d be embarrassed 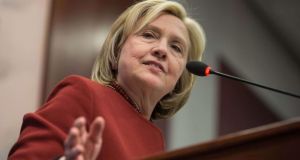 Hillary Clinton: in the running in spite of being a woman. Photograph: Nicholas Kamm/AFP/Getty Images

Hillary Clinton is the frontrunner for the 2016 Democratic Party presidential nomination. In 2008 she reached second place in the primaries, winning 21 states and more than 18 million votes: more than any other woman in history. If Clinton wins, she’ll be the first female president of the US.

On social media and in conversations with friends, I’ve seen a persistent worry with regard to all this: the US needs to choose the best president for the job. People need to be careful not to vote for Clinton just because she’s a woman.

I note similar fears in Ireland regarding gender quota legislation, which ensures that (a mere) 30 per cent of party candidates are women. Currently, 84 per cent of our elected representatives are men. When it comes to parliamentary gender equality, Ireland sits in 83rd place globally, below Saudi Arabia, the United Arab Emirates, Afghanistan and lots of others countries people like to tell me I should be grateful I don’t live in whenever I talk about feminism.

In spite of this social context, an acquaintance recently told me that gender quotas are sexist; that candidates should be chosen on merit, not gender. He rounded off with, “besides, would you not be embarrassed if you were sitting in the Dáil and you knew the only reason you’d got there was because you were wearing a skirt? I’d be embarrassed.” His sentiments were echoed by Derek J Byrne in this newspaper in March. Byrne asked, “Would any woman with a sense of her own self-worth allow herself to be a token of gender balance over a male colleague who she feels would be a more qualified choice?”

We are all sexist. Countless studies show that when presented with men and women of equal ability, people rate men as more capable, promising and likeable. For example, in 2012 researchers gave science faculties at renowned research institutions two identical CVs to assess. Half the scientists received a CV with a female name, and half with a male name. The “female” applicant was consistently deemed less competent, and the scientists were less likely to want to hire or mentor her. Further, implicit association testing, a technique that measures the degree to which we associate things at a cognitive rather than conscious level, shows that even people who do not consider themselves sexist hold strong prejudices against women.

Author Doris Lessing has a wonderful collection of essays called The Prisons We Choose to Live Inside. In it she muses about what people from the far future will consider the most incomprehensible facet of our contemporary existence. Here’s her answer: we have amassed a huge volume of sociological and psychological knowledge about how our minds work and how we function in groups, and yet we almost completely fail to implement that knowledge in our lives or in our political systems.

I love trying to imagine a world in which we step outside of our prejudices to look rationally at the bigger picture. When it comes to women in politics, let’s use what we know. Women are under-represented. We all hold subconscious sexist prejudices. So, on a macro level, we need measures – such as gender quotas – in place to combat this, and, on a micro level, all else being equal, if it’s a personal choice between a male and female candidate, why not consciously account for subconscious bias and choose the woman?

To those who are worried that people will vote for Hillary just because she’s a woman, I propose a simple question: of all 43 presidents of the US, what gender do they have in common? That’s right. We can roundly conclude, then, that being a woman is not a trait that is much prized or rewarded by the American electorate. We might even suggest that Clinton is in the running not because she is a woman, but in spite of being a woman. We could even argue – gasp – that every president of the US was elected in large part because he was a man.

And when it comes to those who think that women with “self-worth” should be embarrassed to avail of political measures created in response to empirically demonstrable gender discrimination, consider this: there are two possible explanations for the boys’ club that is the Dáil: (a) it’s a meritocracy, and these men are in charge of the country due to their superior qualifications, intellectual acumen and moral fibre – the best people for the job just happen to be male; or (b) gender prejudice and other social factors are preventing the full political participation of equally talented women.

All you have to do is listen to Enda Kenny lecturing the Greeks on how much we’re all enjoying austerity to realise that there are a few flaws with proposition (a). But what about (b)? What are the social factors that prevent women from holding power?

In an excellent riposte to Derek Byrne, Michelle O’Donnell Keating talks about the five Cs that hold women in politics back: culture, confidence, candidate selection, cash and care. Ireland has a sexist culture; we expect people in positions of leadership to be male; this culture chips away at women’s confidence in their ability to lead; when women do step up, the boys’ club is less likely to put them forward as candidates; according to the 2009 census, women have on average only two-thirds the income of men, and politics is an expensive game; and finally, Irish women spend three times as much of their day doing household and care work as men do.

You know, if I were a man sitting in the Dáil and I knew the only reason I’d got there was because of the special privileges my gender affords me, I’d be embarrassed.