The Irish fear of failure is holding us back, say tech entrepreneurs, who rarely invest in people who have always succeeded 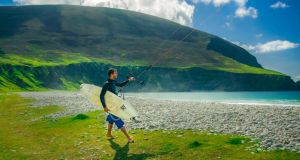 ‘So, we should exchange details,” says Aaron Gershenberg, founder of Silicon Valley Bank’s $1.7 billion (€1.26 billion) capital fund. “Are you on LinkedIn?” I’m not. “How about Facebook?” No. “What’s your Twitter handle?” I knew then I had no business being at this kite-surfing and cycling weekend in Achill for selected attendees of the Dublin Web Summit. My business cards were sodden from Achill’s relentless rain. My phone too was struggling with the ceaseless multidirectional wetness and no amount of stroking or prodding would coax it into life.

Gershenberg smiled indulgently, though I knew he had a flight to India to catch. Every moment of his time in Ireland was precious; he had been on the RTÉ News the evening before in relation to the $100 million (€74.43 million) that his SVB Capital fund plans to invest here over the next few years.

My opportunity to connect was withering fast. I was still recovering from an incident earlier when I had spotted some elite venture capitalists and tech cognoscenti in the hot-tub at around 2am and decided to join them. I had a split second to decide quite how naked they were under the Jacuzzi bubbles as I felt it important that The Irish Times fitted in as well as possible with these free-wheeling San Franciscans.

I stripped off and jumped in only to find, when the bubbles died down, that The Irish Times was the only one naked.

Things had started off more promisingly when the entrepreneurs and venture capitalists drove out across Achill Sound from the mainland into wild Atlantic skies that poured celestial colours across the verdant mountains and the lapping waters of Keel Lake. Even the feral sheep blocking the roads seemed less menacing than usual.

These invite-only attendees had come from two days of frenetic networking and deal-making at the Web Summit and their sudden teleportation to Pure Magic, an outdoor adventure lodge beneath Sliabh Mór, was disorientating.

They gathered around the bar introducing themselves and chirping elevator pitches at one another. The passion with which they described their ventures only added to their indecipherability: phrases like “leveraging real-world context for democratising creation” and “open-syndication survey monkeys for HIPAA-compliant platforms” left me clueless.

I had come because of some intriguing ideas about failure the organiser, Philip McNamara, had spoken of. “There’s a taboo in Ireland around failure that doesn’t exist in the Bay Area,” McNamara said on the phone from Silicon Valley the week before. “Trying something, failing and trying again is the norm here. Many venture capitalists will only fund those who have failed big and often. Some of the guys you’ll meet in Achill are investing in up to 40 start-ups and probably will end up losing 75 per cent or 85 per cent of their investment.”

I was intrigued to meet these highly successful, failure-lovers. They are, after all, moulding our futures; building a socially connected world where all information is accessible and intelligible. It has always been thought that if everyone could speak to everyone else there could be no secrets. These people are now creating this dream, banishing the darkness of disconnection . . . while also designing sinister ways to manipulate us into buying useless tat and violent video games.

Once those in Achill had exchanged names and pitches they began sharing their “kitemares” – perilous kitesurfing incidents. This extreme sport has spread like a virus through the tech community. It uses a vast kite attached to a tiny surfboard with a 75ft-long tether to create the ride of a life. Kitesurfing ability was not a prerequisite to attending the weekend, but the most dynamic and successful attendees were proficient.

Khris Loux, CEO and co-founder of Echo, the world’s largest real-time web platform and founder of security software firm, Securix (sold for $115 million), told of a friend being dragged across the sand and having her face torn open. An analyst from PWC tried to match the story, but both were trumped by Simon Dunlap, a CEO of Dream Industries in Moscow who told of being choked by his kite strings and having to cut them to save his life. The infectiousness of kitesurfing among tech pioneers is thought to arise from its riskiness and the fact that it is as far from the old businessman’s disease of golf as one can imagine. “Failure connects the two,” McNamara says. “Just as most start-ups fail, kitesurfers fail the whole time too. It’s one of the hardest sports to learn.”

There is also the fact that it is collaborative, like tech programming. Having someone to help launch and land the kite makes it infinitely easier and safer. At the main kitesurfing beach near Silicon Valley you’ll encounter the likes of Google founders Larry Page and Sergey Brin, Second Life’s Philip Rosedale or venture capitalist Bill Tai helping you launch or asking for help to land.

Tai’s MaiTai kitesurfing event on the island of Maui was the inspiration for the Achill weekend. Three years ago McNamara met Aaron Gershenberg there. Gershenberg introduced Tai to kitesurfing. Millions in investment are sealed annually at MaiTai and Tai reckons about 70 per cent of his investments are in companies with kitesurfing founders.

“Anyone willing to kite is likely going to be high energy, confident about their ability to handle complex environments, and not afraid to take calculated risks,” Tai told Kiteboarder Magazine. “If they have been kiteboarding for a while, they are, likely, folks that are well balanced and have learned not to take stupid risks either!”

Basically, he’s saying if you want a slice of the $100 million that Aaron Gershenberg's SVB Capital Fund plans to invest in Ireland, consider swapping golf clubs for a kite board. Already, some of the $22 million he has poured in here has gone to kitesurfers.

Over dinner it was hard not to think about the inevitable failure awaiting at least 75 per cent of attendees. Their years of effort would be wasted. The only people guaranteed to benefit were the lawyers, accountants and consultants who profit either way. It was fitting that the weekend was being paid for by them: by Beauchamps Solicitors, PWC, Silicon Valley Bank and the IDA.

Looking around I tried to guess which of the ventures might thrive. Beside me was Kelly Neary from Nest.com which gives savant-like intelligence to unloved household items like smoke detectors; opposite was Simon Dunlap from Dream Industries which is developing technology to wrestle financial control from publishing conglomerates and return it to musicians and writers. There was girl with a language learning app called Smidgen and a former special-ops soldier with something described as AirBnB for the hospitality industry.

My ears-pricked up when Loux tweeted madly: “Love @tweekaboo a great way for families to capture the life moments of their children.” He was referring to an app developed by the man beside him, Eugene Murphy, who grew frustrated at missing out on moments of his children’s lives and created Tweekaboo.com to collate , voicemails, texts, photos, and videos of them on his phone.

The entrepreneurs were admirably encouraging of each other even thought they were fishing for the attention of the same investors, especially the rather reserved Konstantin Othmer, an early investor in Tesla Motors and founder of CloudCar, Speechpad, Core Mobility and SpeechInk.

But next morning, on the 50km bike ride, the competitive streak came out. Turas Bikes, a maker of carbon-fibre bikes from Ballinasloe, had brought 20 samples and within minutes the cool techie T-shirts were exchanged for serious racing attire. The elite investors tore off into a raging Atlantic storm with 80kph gusts, while the entrepreneurs chased frantically after, The Irish Times puffing valiantly along behind.

It became suddenly clear which of the entrepreneurs had the resilience to bring a project to fruition: I had dismissed Gillian Morris’s Hitlist app which tells you the cheapest time to fly somewhere, but once she raced ahead through the howling gale, wearing nothing but running socks, I realised this was the woman to bet on, not the unfortunate French-Brazilian whose brilliant social media spying programme now seemed as weakened as he himself was, collapsed with near-hypothermia.

When a taxi had to go fetch him and a van was sent to collect his bike, I thought about how humiliating failure seems, no matter how positively it’s painted. A loser, is really just a loser. But then he reappeared, with a sheen of ebullience in his eyes, talking of how he had cherished every moment of the trip; the knife-edge precariousness of battling his body against the elements was the highlight of his time in Ireland. Having to admit defeat only intensified his hunger to keep striving.

That night we went for a music session in Lynott’s and the Valley House bar and when the venture capitalists began singing Bob Dylan songs, I just waited for that line: “She knows there’s no success like failure, and that failure’s no success at all.”