Seven things to do on St Patrick’s Day without booze 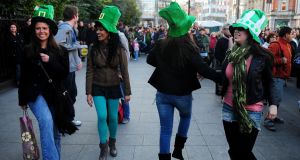 Without the booze, you can enjoy being far better at your one two threes than your less sober friends at this year’s Festival Céilí, on Earlsfort Terrace on Friday 18th at 4.30pm. Photograph: Aidan Crawley/The Irish Times

St Patrick’s Day may be synonymous with all things Irish - shamrocks, leprechauns, the colour green - but none of them more so than our love for a cheeky pint or several. So enthusiastic are we about drinking on St Patrick’s Day, it has become a holiday associated almost solely with drinking in other parts of the world.

This means joining in the fun on St Patrick’s Day as someone who doesn’t drink, or doesn’t want to drink, can be a struggle, but there are plenty of ways to celebrate your Irishness without ending up plastered.

Here are seven things you can do on St Patrick’s Day without the booze.

First things first, if you want to go out, you still can have plenty of fun without feeling left out by staying home while all your friends head out drinking. If you don’t drink, you’re probably used to nights out as one of the only sober people around anyway. On St Patrick’s Day though, when drinking often starts before noon, you may have to call it a night early or buddy up with another non-drinking friend to keep you company when the messiness starts to set in.

The parade in Dublin is probably the highlight of St Patrick’s Day and while people will likely be drinking around you, if you get in early and find yourself a good spot, there will be plenty going on to keep you entertained. The theme this year is “Imagine if...” and it starts at midday. You can take yourself out of the city after the parade, before the carnage sets in if you like. Parades take place in many cities across the world, so this one is relevant wherever you might find yourself.

3. Take part in some of the events as part of the festival

After the parade, your first destination doesn’t have to be the pub. There’s plenty going on around the country as part of the St Patrick’s Festival that doesn’t have to involve alcohol. In the capital, you can take a walking tour with Dublin Walking Tour’s ‘In the footsteps of St Patrick’ tour at 2.15pm. Merrion Square and Custom House Quay will have the funfairs that have been a mainstay of the weekend for the last number of years, and there’s street theatre happening at various locations. A series of engaging, intimate cultural events, collectively called I Love My City, are being staged across cultural venues throughout the weekend. The Laughter Lounge in Dublin is running a Best of Irish event in the evenings across the weekend from 7pm which might be a good alternative so your friends can keep drinking, but their drunken mistakes won’t be the only thing to get a laugh out of. Check out stpatricksfestival.ie for the full line of up of the week’s events.

4. Head to the cinema

Cinemas will be quieter than usual on St Patrick’s Day so are likely to be able to catch a film in the afternoon or evening without being crammed in next to the world’s noisiest popcorn eaters. Given the day that’s in it, maybe choose an Irish film, or if you’re stuck, something with Irish actors, to keep you connected to that Irish theme. Across Ireland, St Patrick’s Day marks the release date of Sing Street, a film about a boy growing up in Dublin in the 1980s, starting a band and moving to London, which might be the perfect choice.

Restaurants are likely to be a bit quieter as well, with the pubs taking most of the traffic. Either way, Irish food extends further than the humble potato and there’s plenty to celebrate about it. St Patrick’s Day is a great day for a classic stew or an Irish coddle, especially if you’ve been freezing away at the parade. If you’re looking to stay away from the city, root out your grandmother’s old stew recipe from wherever it resides and invite a few friends over to enjoy some Irish grub with you.

6. Get yourself to a session

If you’ve gotten a taste of Irish trad music at the parade, find yourself the closest trad session and enjoy some Irish music throughout the evening. If you’re looking for something a little more involved, MVP on Clanbrassil Street in Dublin is holding a St Patrick’s Day Singalong Special with some less traditional but still very Irish music for you to well, sing along to. Alternatively, find yourself a local ceili or Irish dancing class and enjoy being far better at your one two threes than your less sober friends.

7. Enjoy the feeling of knowing you won’t be hungover on Friday

The best thing about staying sober is the lack of a hangover. Be as smug as you like, because there’ll be a fair few sore heads come Friday morning.

Paul Flynn: Three delicious dishes you can bank on this weekend
10