Sean Moncrieff: ‘Love Island’ is a spooky avatar of our fake news universe

Television is all artifice, and the point is that the audience knows this too 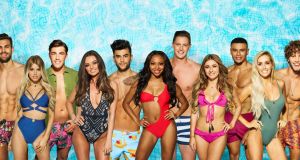 The cast of ‘Love Island’: the show has impregnated the belly of popular culture

To research this column about Love Island I watched approximately four minutes of Love Island. A man and a woman had a chat about who they liked. The man seemed to like the woman he was talking to, (“we have a little laugh,” he growled), though she didn’t seem entirely convinced. However, she did follow him into the villa, and after looking about conspiratorially, they kissed: an odd precaution to take in a house covered with cameras.

It wasn’t much, but it gave me the gist. Anyway, Love Island has impregnated the belly of popular culture so completely this summer that I don’t feel I need to watch the actual show. I know that one of the contestants thought Brexit was something to do with trees; that there are complaints that all the male contestants look like clones of each other; that one of these clones is heir to a multi-billion fortune; that another quit the island because he has Asperger’s; that it is the whitest show on British television. The only non-white contestant failed to generate any love interest for some weeks, which the Love Island twitterati denounced not as racist but ‘colourist’.

Why Love Island has become so popular this year is a mystery to me and it seems, to many others. People are talking not just about Love Island but the sudden, astonishing popularity of it. Just the other day a colleague gushed: “everyone is watching it. Smart people are watching it. Louise O’Neill watches it.”

Indeed she does. Or at least she tweets about it. Perhaps, like me, she feels she can comment without watching the actual programme. Of course there are a number of predictable things I could say about Love Island. It’s exploitative. It’s crass. It’s jaw-droppingly dumb. But I won’t.

Hash tag boys will be boys.

I swear to fucking god, I’ve decided I want to die alone. #LoveIsland

Despite its reliance on semi-nudity and the promise of bonking, Love Island is a relatively prim version of the reality TV template

The fact is that Love Island engages people, and has been doing so for the best part of 20 years. Because this is an iteration of essentially the same programme: Big Brother, Castaway, Geordie Shore. A group of people are forced to live together. The audience watches to see who will fight with who, or who will have sex with who. The audience gets to vote people off or save them.

Despite its reliance on semi-nudity and the promise of bonking, Love Island is a relatively prim version of this template. Unlike Geordie Shore, you never see the contestants smoking or drunk. Swearing is kept to a minimum. But like all the others, the interactions do occasionally raise some interesting and serious questions: about sexual dynamics, sexism and of course “colourism”.

One perennial criticism of reality television is that it’s anything but: it’s heavily scripted. The spontaneous rows and love stories often require several takes. Well of course they do. It’s how television is made. Television is all artifice, and the point is that the audience knows this too. They know that the contestants are in a situation so artificial it borders on the surreal. Yet despite this – or perhaps because of it – they hope that eventually each person will reveal their true nature. Curiously, this is similar to the created reality Winston Smith had to endure in Big Brother (the book, Nineteen Eighty-Four).

Back in the early 2000s, Big Brother (the TV show) was the subject of multiple academic studies, and the same word kept coming up: authenticity. Audiences tended to vote for the person they felt was the most genuine. And they still do. Especially now, when nearly everything is fake but pretending otherwise.

Consciously or not, reality television seems to be a spooky avatar of our fake news universe, while shaped around the ancient trope of the mythic redemption story. From fakery will emerge the chest-shaved truth-teller. Jesus in a thong.