Seán Moncrieff: Now that I can’t hug anyone, I want to hug everyone

Like Olaf in Frozen I enjoyed warm hugs – in moderation 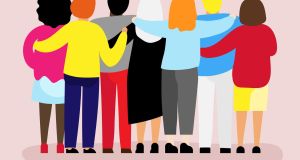 Nowadays, there’s a lot of hugging, which seems to be an American import and of a particular type. Photograph: iStock

When I was a young fella, you’d say hello to other young fellas by nodding sheepishly or grunting howya or even by not acknowledging each other at all. Nowadays, there’s a lot of hugging, which seems to be an American import and of a particular type. You don’t just throw your arms around each other and squeeze. It’s complicated, and involves each party clasping their right hands to each other, pulling in and ending the gesture with vigorous back-slapping.

Done well, it’s almost graceful. Done badly, it looks contrived and awkward and leaves me feeling glad that I’m not a young fella any more. Not that men of my age don’t hug. We do, but the protocol is different. There’s none of the complicated hand clasping, and it only happens after a few pints. Naturally.

Still, one could be buoyed by this. It seems to indicate men being more willing to express affection and not being afraid to express this emotion in a physical form. Some have interpreted this as the beginning of the end of homophobia, given that so many straight men had previously been nervous about hugging for fear it could be interpreted the “wrong way”.

But that could be a mistake. At least according to some anthropologists. They claim that men have been hugging since ancient times, the aim not being to express affection but to demonstrate that they are not a threat. Hugging puts both parties in a vulnerable position, but it’s done in a very specific way. The palms are open, to demonstrate no secret weapons, and they pat each other on the back, which is one of the less vulnerable parts of the body. A real sign of trust would be to hold each other by the neck; or (as baboons do) by the genitals.

The patting also adheres to rules. It needs to be vigorous enough to imply manly horseplay, but not so intense as to suggest aggression. It also needs to be audible – when young men hug you often hear it before you see it – the idea being to tell others that this is a strictly heterosexual clash of bodies. Nothing funny going on here.

So, if you completely buy this theory, the fashion for hugging isn’t evidence of men being comfortable with physical intimacy, but quite the opposite. They’d rather not hug at all, but are prepared to do so as a way to establish trust. But it’s not a gay thing. Listen to all that back slapping. Definitely not gay. No way. Slap slap.

But this is just a theory, and the thing about theories, especially when exploring cultural phenomena, is that the opposite can also be true at the same time. No doubt there are young straight men eager to be seen as young straight men, and other young straight men who really don’t care; who think it’s utter nonsense to try and encode a hug with a meaning it doesn’t need to have. It’s a simple and pure sign of affection; and it’s good for men, good for people, gay or straight, to be able to express affection this way.

I imagine that for people who have had to self-isolate, the hierarchy of needs becomes very clear

There may be other young men somewhere in the middle of these two paradigms, or their own odd mixture of the two. Because people are complicated.

But they are also not complicated. I imagine that for people who have had to self-isolate, the hierarchy of needs becomes very clear; and high among them would be human touch. There may be many young straight men who now would love to be hugged and suddenly care far less how others might interpret such an action.

Even for those of us that can move about, who are reduced to bowing or nodding or elbow-bumping, that lack of human touch feels like an ache; an invisible barrier between us all. Like Olaf in Frozen I enjoyed warm hugs. In moderation. Now that I can’t, I want to hug everyone.

It’s good to have illusions about yourself
7