Seán Moncrieff: ‘If you believe anti-vaxxers, something is very wrong. With you.’ 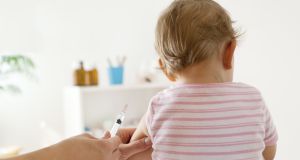 When a portion of people refuse to get their kids vaccinated, they are taking an action that not only affects their children – it affects all children.

There are few individuals as self-righteous as a parent declaring that they are entitled to decide what’s best for their child. Usually they are, though not always.

If they are abusing their kids or failing to educate them, the State can step in. Hospitals have had to get court orders so they could blood transfuse a child when parents opposed it.

Most people would approve of such interventions. In such cases the rights of the child (to be safe or educated) trumps the rights of the parent to force their views on their children. There might be a bit of grumbling or tut-tutting but rarely any outcry, given that it’s just the family unit that is affected.

But the case of vaccination is a lot trickier, as it concerns everyone. It concerns you. A report from Unicef last month revealed that more than 20 million children a year are missing their measles vaccinations.

In 2017, 110,000 people died from measles – an increase of 22 per cent on the previous year. These facts are connected. It’s happening mostly in the developed world and Ireland is no exception. Infection rates here doubled in 2018.

The so-called anti-vaxx movement has mushroomed over the last decade or so, spurred on by a poisonous combination of bogus science, misunderstanding of how vaccination works, lies, conspiracy theories and disingenuous statements such as: are we not allowed to ask questions? But asking questions isn’t the problem. It’s a refusal to believe the answers.

A vaccination doesn’t make you 100 per cent immune. It has to come in conjunction with everyone around you also getting a vaccination. When everyone has greater protection against the virus, the virus has nowhere to go, and dies out. That’s what happened to smallpox.

Thus when a portion of people refuse to get their kids vaccinated, they are taking an action that not only affects their children – it affects all children.

If an anti-vaxxer sends their unvaccinated child to your creche, they are putting your child at risk. My child at risk. Here’s me sounding self-righteous: I too have the right to decide what’s best for my child. But how do I protect them from other people who don’t believe in science?

After that Unicef report, social media was swamped with people talking about how they or their kids got vaccinated and that it didn’t cause autism, contrary to the connections drawn by the anti-vaxxers between vaccinations and autism.

In some cases, their children were autistic already. The tone was respectful to people who don’t see it this way. The point was made repeatedly that it’s difficult for new parents, faced with so many decisions. And yes, it is difficult.

If, after having a child, you’re suddenly prepared to accept as true a world-wide conspiracy involving every government, every drug company, every health researcher and your local GP, then yes, something is very wrong. With you.

Last month, Simon Harris made noises about making the MMR vaccine mandatory, as it already is in France and Italy. But his legal advice was that it was probably contrary to article 40.3 of the Constitution that guarantees bodily integrity.

In any event, such a move would almost certainly be challenged in the courts. Similarly, a ban on unvaccinated kids from schools and creches could also meet with legal resistance.

All these are ugly options. No one wants to exclude kids, or even force parents to have them vaccinated. But when the various rights are considered, the larger group must prevail: children.