Sarah Geraghty on... loving ‘The Sound of Music’ 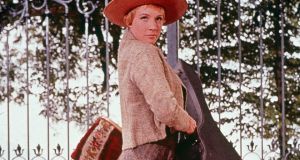 ‘Who knows the name of the mountain the Von Trapps walked over to get to Switzerland at the end of the film?”

My cousin rockets out of the seat beside me. “The Untersberg,” she shouts. Then sits down again, shooting me a satisfied nod and a wink.

Go team. Twelve heads – from Ireland, the UK, the US, Australia and Japan – whirl around to check out the Sound of Music Mastermind at the back of the bus.

“I think since I started the job, this is the first time anybody’s got that question right,” said the stunned English tour guide, 30 minutes into a four-hour Sound of Music tour around Salzburg.

They had no idea who they were dealing with.

There was a brief moment of panic when we arrived at the Mirabellplatz pick-up point that afternoon.

No sign of the jolly yellow bus with Sound of Music scripted along the side, seen routinely zipping around the place. Only a big, grey coach.

No matter. On we went with our two mini bottles of Prosecco (the brochure said we could) to celebrate this milestone event in our lives.

“God, do you think we’re the only ones who brought drinks?” Looked like it.

The trip was a 30th birthday present from one greatest fan to another. We inherited the love from my dad and her mum who, legend has it, hid in the cinema watching the film on repeat back in the days when you could do that.

We’d push back furniture and jump from couch to chair, in an effort to replicate Liesl and Rolf’s Sixteen Going on Seventeen glide around the gazebo.

There was high excitement in transition year when The Sound of Music was announced as the 2001 school musical. Then great personal shame when I landed the only non-singing role – Frau Schmidt, the housekeeper.

In a singsong the day after the Mastermind’s wedding last year, we – and three other bridesmaids – performed So Long, Farewell to mighty acclaim from family and friends.

Fast forward to January 2015; the growing despondency as the bus climbs every mountain overlooking Salzburg is unexpected.

There’s no sound of music. Just the guide who seems to thrive on crushing beloved “film-facts” as Hollywood myths. Remember the glistening lake in front of the Von Trapp’s house where Maria and the kids tumble out of the boat? That’s real. Okay, it was covered in 3ft of blinding snow but it’s definitely there.

But the actual house in the film, she told us, is two different buildings. And, the interiors were all filmed on Hollywood sets.

Our cherished gazebo scene? That was shot in a studio lot in LA too. The one we visited was a smaller replica of the original.

The Von Trapps didn’t flee Austria on foot – they took the train. They didn’t even go to Switzerland. And they weren’t carrying any musical instruments.

The worst of all? There was no Gretl, never was. “She’s ruining everything”. Staring out the bus window to Nonnberg Abbey where the Reverend Mother wondered – for real – how to solve a problem like Maria.

Things look up as the bus winds down a mountain to Mondsee Cathedral where Maria and Captain Von Trapp got married – except they didn’t actually, it was just filmed there.

The guide finally hits ‘play’ and we, along with about half the passengers, are warbling contentedly to My Favourite Things.

After some actual crisp apple strudel near the cathedral, we’re back in the game. And we’ve figured out what the others are doing here.

A British couple are celebrating the wife’s 50th birthday. Twin 30-something sisters had come for the skiing but stayed for a tour they’d wanted to do for years. An American woman, “doing Europe on a shoestring” with her 21-year old daughter who had just moved to Dublin, wanted to pass on her Sound of Music love to the next generation. One of two cool Australian film students, in their early 20s, had never seen it and was definitely not into the singing parts – but had invested a significant portion of his tight travel fund in Salzburg because, “it’s one of the most important films ever made – no other film has had such an appeal, for so long”.

On the road back to Salzburg, we crack open the bubbles and have our little toast.

By the time we’re dropped off at the Mirabell Gardens – where Maria and the seven children hopped on the steps for Do-Re-Mi – it’s too dark for our planned re-enactment.

By the time you read this, I might have seen the stage version which opened in Dublin this week. But I don’t know if I’m ready to see anyone other than Julie Andrews as Maria. I’m just not ready for another busted myth.

I’ll have to consult with the Mastermind.