Ross O’Carroll Kelly: ‘You run from Donegal with a bicycle on your back, cut your Achilles tendon..'

This is getting ridiculous, it's like being on a spa weekend with Sorcha' 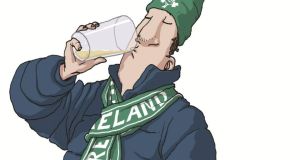 I’m not drinking these days, Ross. I’ve got my allergies. I’m actually off everything. Wheat, dairy, alcohol, salt, then obviously sugar.

I rub my two hands together. It’s my first night away from Sorcha in I don’t know how long – weeks, probably – and I am determined to enjoy it. She wasn’t altogether crazy about the idea of me going out tonight, but the Friday before the stort of a Six Nations campaign has always been the night when we meet in Kielys of Donnybrook and I give everyone my analysis of how I see the championship panning out.

Mary has the pint glass in her hand the second she clocks me. I’m there, “Yeah, no, pint of the old Tolerance Water, Mary. And Oisinn here will have the same.”

She reaches for the pump. She knows the stuff I mean. And that’s when Oisinn says the most extraordinary thing. He goes, “Not for me, Ross.”

“I was going to say Morch. Why would you want to do that?”

“I suppose to prove that I can.”

“Oisinn, are you listening to yourself? This is crazy talk. That means you’re not going to be drinking for, like, four of Ireland’s five matches.”

“I don’t mind,” he goes. “I actually don’t need it anymore. Mary, what juices do you have?”

I’m like, “They’re not for sale individually, though. They’re just mixers. They’re for putting in ladies’ drinks. Tell him, Mary.”

All I can do is just shake my head.

But then JP and Christian arrive and I think, okay, here we go – the weekend storts here! I’m there, “I’m presuming you two will have a pint?”

“But do you have to go off the drink on the eve of a Six Nations to do this thing?”

But then suddenly I don’t mind too much because Fionn has just walked in. He’s always been the voice of reason in our group. He’ll get hammered with me. I’m there, “Pint of the old Giggle Juice for the dude in the specs.”

But Fionn goes, “No, I’m not drinking these days, Ross. I’ve got my allergies. I’m actually off everything. Wheat, dairy, alcohol, salt, then obviously sugar.”

“This is getting ridiculous. It’s like being on a spa weekend with Sorcha. I suppose you’re having a juice as well, are you?”

“No, I actually had one before I left the house. Have you discovered the NutriBullet yet?”

“Dude. I’ll stort taking my meals in liquid form when I’m 112 and my teeth have fallen out. Until then, dinner is a meal. It’s not a drink. Heineken is a drink.”

“Some of these juices are really tasty, Ross. I just had one with kale, jalapenos, pineapple and Himalayan Pink Salt.”

Himalayan Pink Salt. This is a man who played rugby.

I can’t listen to any more of this. I have to hit the jacks. As I step into Trap One, my phone rings and it ends up being Sorcha. She’s like, “Ross, where the hell are you?”

“Kielys? I thought we discussed this. We were supposed to be meeting my parents for dinner.”

“There’s no point in continuing this argument, Sorcha, because I’ve already said I’m coming home. I was supposed to give the goys my traditional Six Nations analysis but they’re all off the sauce. Seriously, I’d have been better off bringing your granny out. At least she’d have a Sandeman’s.”

“You don’t need drink to enjoy yourself, Ross.”

“I’m not going to comment on that, Sorcha. I’ll leave you to think about what you just said.”

“Well, why aren’t they drinking?”

“What’s happening to the world? I genuinely think that’s why so many people are turning their backs on religion – there’s a million other things to feel guilty about instead. Sorry for being deep.”

“I’m not crying . . . I’m a little bit crying. It’s just, I don’t know, my pre-Six Nations analysis was something they used to look forward to from pretty much Christmas onwards. And maybe I’m a bit, I don’t know, down in the dumps, because I’ve realised that I’m another Six Nations older and the IRFU still hasn’t found a place for me within the set-up. I’ve got all this knowledge and it’s just there in my head. For instance, I think Scotland could turn over England tomorrow.”

“That’s nice of you to say, Sorcha, but you wouldn’t know a rugby ball if one hit you on the head. Look, I’m just going to go and say goodnight to the Juice of the Month Club. I’ll see you in a bit.”

I pull the door of the toilet open and I hear the laughter straight away.

Everyone in the whole of Kielys is staring straight at me. I look at Fionn, Oisinn, Christian and JP and the first thing I notice is that they all have pints in their hands. They hold them up and everyone goes, “Suckered!”

I laugh. I can’t help it. I have the best friends in the world. Someone puts a drink – an actual drink – in my hand and everyone gathers around, their faces full of expectation, to hear what the Rossmeister has to say.

Spring dresses to dream about

Róisín Ingle: Hairwise, it’s only a matter of time before we go full Sinéad O’Connor
5

Isolation on the Wild Atlantic Way: ‘I stopped here for the day – and never left’
6

So your children now watch too much TV? Cut yourself some slack
7