Ross goes to Electric Picnic: 'I’m not staying in a focking tent' 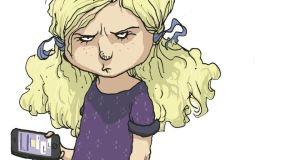 Sorcha whips back the flap and in we go. It’s all cushions and rugs and beanbags and mood lighting. She stretches her two orms out, crucifixion-style, and does a full, 300-and-whatever-degree twirl, with a big, stupid grin on her face.

“Look at this place!” she goes, hoping that we’ll somehow see what she sees in it? “This is what going to Electric Picnic is all about!”

On balance, I’d say my wife’s least attractive quality is her enthusiasm for trying new things.

I’m like, “Seriously, Sorcha, there are many things in life that I would consider myself above – and one of them is definitely camping.”

“It’s not camping,” Sorcha tries to go. “It’s what they call glamping!”

Honor whips out her phone. “I’m staying in Castle Durrow,” she goes. “It’s what they call five-stor hoteling.”

Sorcha’s there, “Ross, speak to your daughter. There’s no point in even being at a festival unless you’re going to, like, immerse yourself in the whole festival experience? Come on, let’s go and soak up the atmosphere.”

She walks out of the tent and we end up having to just follow her. She looks a total state, by the way, and I’m saying that as her husband. She’s wearing, like, a short, white gypsy dress, black Hunters, white, hort-shaped shades and a straw boater.

And she’s talking in this, like, continuous stream, going, “If we only do one thing today, can we definitely go to the Theatre of Food? I want to try the famous goat’s milk ice cream and also this, like, pressed apple juice made from 28 varieties of apple, all of them grown in Mayo. And there’s a band that Garret and Claire told me to go to see – no one has ever heard of them, but Garret says they’re going to be bigger than The Script and they’ve only just done the Junior Cert. And, oh my God, in the Mindfield area, there’s a woman who sings the poems of Thomas Kinsella to Andrew Lloyd Weber tunes – so, so random – and there’s also a theatre group from Tuam who tell the story of a home repossession through interpretive dance. The Irish Times described it as brave and – I think – important? ”

Honor turns around to me and goes, “How old are all these people?”

And she goes, “Why didn’t they just enjoy themselves more when they were younger?” and I end up having to laugh, because she’s nailed Electric Picnic right there.

There’s suddenly a squeal out of Sorcha. “Oh my God,” she goes, staring down at her phone, “there’s a Junior Shakespeare Workshop this year! Let’s look for it. Come on, Honor, you love drama!”

She’s very much her mother’s daughter in that regord.

The tent is easy enough to find, because it has, “Junior Shakespeare Workshop!” on the side of it in, like, massive letters, with two masks – one smiley, one sad – on either side. In we go. The dude in chorge is called Aodhan and there’s a group of maybe 15 or 16 kids listening to him blabber on. Honor wanders over and joins them.

“When I tell people that I teach Shakespeare to children,” he goes, “the response is always the same. They say, ‘How can children understand Shakespeare?’ And in response to that, I always quote Berthold Brecht, who said, ‘For children, only the highest themes are high enough.’”

I’m looking around me to see if there’s a bor.

“Ross, try to remember that quote,” Sorcha goes. “Berthold Brecht. Actually, put it into your phone if you still have battery power. I’m going to go out and get us something to eat. I’m storving!”

So Sorcha heads off and I sit down with the other parents. “The play we’re going to tackle today is Julius Caesar,” Aodhan goes, “one of several that were written by Shakespeare based on real-life events.”

I suddenly get this tap on my shoulder. When I turn around it ends up being a dude called Linus Ormsby, who played full-back for Belvo back in the day. We’re both like, “How the hell are you?” and we instantly high-five each other – the differences in our backgrounds totally forgotten – and he introduces me to his wife, who’s called Pyper. She’s not great, in case you’re wondering.

They’ve got, like, a picnic basket with them. “Here,” Linus goes, “you look like you could use a drink,” and he pours me a plastic beaker full of cava. I throw it into me.

Pyper’s there, “Electric Picnic is such an escape, isn’t it? Have you tried the goat’s milk ice cream?”

“And you definitely have to see the woman who looks like Amy Winehouse and sings Mirror in February to the tune of Another Suitcase in Another Hall while her husband plays the saw.”

Linus smiles at me and rolls his eyes. “I have to endure this every year,” he goes. “I’m just here to see Florence and the Machine and the Riptide Movement and to get seriously messed up in between.”

He tops up my beaker – you’d have to say fair focks.

That’s when Sorcha suddenly arrives back. “I bought Crepes Suzette from a man on stilts!” she goes, all delighted with herself – then she storts looking around her with a confused expression on her face. “Ross, where’s Honor?”

A woman sitting in front of us goes, “Is she the little girl who said, ‘This is focking lame!’ and then walked out – about 10 minutes ago?”

That’s a pretty good description of our daughter alright.

“Oh my God,” Sorcha goes, dragging me to my feet, “Honor is missing at Electric Picnic! Ross, we have to find her!”

‘I’ve had my butt kicked for the past three years’: Jamie Oliver on fame and failure
10