Rats in space? Bob Geldof plans to go into orbit

Virgin Galactic has successfully completed the second test of its private spaceship this time reaching Mach 1.43 and climbing to an altitude for 69,000 feet (19,812 metres) after being released from it's mothership. 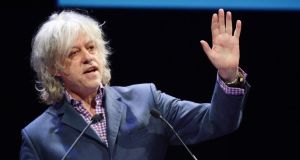 Bob Geldof has said he will become the first Irishman in Space as he plans to travel there next year. Photograph: Alan Betson / The Irish Times

Bob Geldof has said he will become the first Irishman in space as he plans to travel there next year.

The Boomtown Rat singer (62) will be one of the first space tourists to enter suborbital flight with Space Expedition Corporation, the US commercial aerospace company which plans to bring tourists to the edge of space.

“Being the first Irishman in space is not only a fantastic honour but pretty mind-blowing. The first rock astronaut space rat! Elvis may have left the building but Bob Geldof will have left the planet,” the Dublin native said in a statement. “Who would have thought it possible in my lifetime?”

This weekend the Dublin rocker was due to begin his training at the space flight simulator in the Netherlands this weekend.

However, he told BBC Radio 4 today that the simulator broke down. “It doesn’t bode well,” he joked.

Geldof hates “waltzers and rollercoasters” which “might be a bit of an impediment”, he said.

“I really wish they would just strap me in and I’d go up and have a look around,” he said.

Geldof said the reason why he agreed to go when given the opportunity. “You’re a guy somebody says ‘Do you fancy going to space?’ Who amongst you would say no?” he said.

“Who wouldn’t want to leave the planet and just have a look..... Just the wonder of it,” he said.” What’s the downside? I’m 62 if anything happens I’d never know about it.”

He recalled where he was when the first men landed on the Moon. “I remember it very well. I was working the night shift at a pea-canning factory in Peterborough,” he said. The factory had Neil Armstrong over the tannoy and “we were just staring up at the Moon”.

The chances of playing a gig in space are slim though. “I think you get 15 minutes of weightlessness and the ship itself has got a very broad view ...I think I’d just be so gobsmacked, just looking at this wonderful thing, I’m not going to have any time,” he said.