Question time on The Women’s Podcast: Who’s catching your eye up the poles? 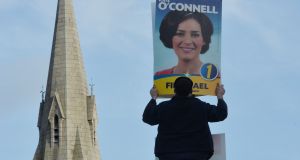 Each week on The Women’s Podcast we ask listeners a question and this week it’s about the election campaign. Guest presenter and Irish Times political reporter Sarah Bardon wanted to know:

“What posters are catching your eye during the election campaign and why? Who has the best posters, the worst posters and the most annoying posters?” Look up the poles near you and tell us what you think by emailing thewomenspodcast@irishtimes.com or message us on Facebook and Twitter @itwomenspodcast. Include a photo of your favourite (or least favourite poster) and tell what you think.

Last week’s question was also about the election and we wanted to know the issues that you are bringing up on the doorsteps with politicians. Sandra Doody had a very long list including inequitable pay structures for new entrant teachers and the failure of the State to provide adequate supports and services for children and families with needs. Also on her list was the Viability of tax cuts, the health service which she says is a shambles and the economic viability of GP practices in light of roll out of free GP care which she says is forcing medics to leave.

Then there is education. Doody wrote: “In my daughter’s non fee paying school voluntary contribution for one child per annum is €490. Differential funding between ETB schools and these voluntary schools is unacceptable. State funding of fee paying schools. The issue of religion in school admissions going to come to fore in secondary schools.”

Amanda Webb from Athy, Co Kildare said there were four things on her list : 1 Mental health 2 Abortion 3 The refugee crisis and 4 Homelessness.

Janine Levine got in touch about an issue that has been exercising many listeners to The Women’s Podcast. She wrote: “When politicians come knocking on my door, I will be asking them to clarify the reasoning behind their position on abortion and repealing the 8th amendment. I know that a number of parties are in favour of repealing the 8th. However, these parties are not in favour of freely available and legal abortion available to all women regardless of the circumstances. They are only in favour of introducing abortion in certain cases, such as in cases of rape or incest, or so-called “fatal fetal abnormality”.

If they say they are concerned for the lives of babies and children, then I will ask what they are planning to do to address the issue of children living in poverty. In this country, we have seen parents with children being refused emergency accommodation and being forced to sleep on the street. Many parties are planning to reduce taxes and have no particular plans for increasing spending on public services or addressing the issue of housing. It seems that politicians are only concerned with the lives of children and babies when this can be used to control the lives of women.’

In particular, I would ask Fine Gael candidates what exactly the purpose and aim of their proposed Citizens’ Assembly on abortion is and what they will discuss and how a decision will be reached on repealing the 8th through this mechanism.”

Also in the podcast this week, an election discussion with a panel including former FF Minister Mary O’Rourke, director of the National Women’s Council Orla O’Connor and first time voter Sophie Kane (22). We hear pregancy test tales in a discussion involving pharmacist Louise Reid and comedian Joanne McNally. McNally said her last pregnancy test was taken in the cinema when she peed into a Slush Puppie cup: “Something tells me I’m not ready for motherhood,” she said.

And in the week Wicklow singer Hozier released his Cherry Wine video starring Saoirse Ronan to highlight the issue of dometic abuse, we heard from women in abusive relationships and the director of Women’s Aid Margaret Martin.

You can subscribe to individual episodes of the podcast on iTunes, Stitcher and Soundcloud or you can find it on irishtimes.com

Róisín Ingle: Even Matt Damon has fecked off back home
7