Question Time on The Women’s Podcast: ‘What issues will you be raising with politicians?’ 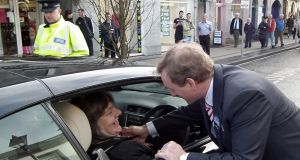 Enda Kenny talks to a voter during an election visit to Ballina. Photograph: Anthony Hickey

Friendship week: From best mates to bromances - All week on the irishtimes.com/life-and-style, we take a closer look at friendship

This week, The Women’s Podcast question is prompted by the General Election and a special What Women Want segment we have planned. We want to know: What issues will you be raising on the doorsteps with politicians? Tell us about the questions you will be asking when the candidates come knocking or ringing at your door.

It’s easy to get involved. Just email your responses to thewomenspodcast@irishtimes.com or message us on Facebook and Twitter @itwomenspodcast.

To coincide with Friendship Week on irishtimes.com and Life daily features pages, last week’s question was all about those important platonic bonds. We wanted to know about the best thing a friend ever did for you. Guest presenter Sorcha Pollak read a selection of listener responses.

Sarah Kelly from Co Clare told us how she met her best friend Elaine. “I was sitting on my own in a function room, in a pink ball gown, way too big hair and a fake smile at a college Ball in the middle of a very recent heartbreak and fighting tears. My ‘so-called friend’ had forgotten about me for four hours, due to a whirlwind romance of her own with someone, somewhere on the dance floor. Such is life at that age.

Then I was introduced to Elaine. Twenty minutes later following a lot of ‘oh my god me too-s’, we were in the middle of the dance floor doing our worst dance moves and making each other laugh so hard that the people surrounding us were laughing. That was it, i had met my best friend.

Only about a month later we decided to get a place together for the following year of college. Imagine living with someone who makes you laugh on the hour every hour? Or where you just spend hours in silence together, comfortably? We had two of those years and then life began and now we are in different provinces for work. We talk constantly and every milestone she has gone through or goal she has achieved I feel as proud as if it is my own and vice versa.”

Jessica from Galway got in touch to tell us about her best friend, a man: “He’s an only child and never knew the gloriousness of having a sibling, whereas I had an older brother who recently passed away. Although, I met my him before my brother’s passing, he somehow slipped right into the role. Five years later, and a hefty load of drama (chiefly from me), we are comparable to the siblings we never had - cut from the same Jedi cloth. When the good fades dark, we talk it out. The force is with us.”

Una emailed us to share a story of when her Mum went into hospice a 2013. “ I was suddenly very alone trying to cope with and manage her care. I was 24, overwhelmed and terrified. I called my best friend Sonja, who’d just gone on a family holiday to Portugal. She dropped everything and flew to me the next day and stayed with my while my mum died and through the funeral. When she had to fly back home to Germany, she called in reinforcements and my other best friend came from Cape Town. Anthea arrived 2 days after Sonja left and stayed with me for 2 months and came with me to my dad’s unfortunately timed wedding that Christmas in Lesotho (my parents had been separated/divorced a few years by then). I honestly have no idea how I would have coped with any of it without them. My friends were much more of a support and care system than anyone blood related at the time. I kind of believe that they are my real family. My mum used to call them my soulmates, and that’s how I think of them now - the pieces of my soul that the universe scattered elsewhere and that I’ve been lucky enough to find again. To summarise, I have the best friends ever and these relationships are what I’m most proud of having built in my lifetime.”

We had a prize this week and that prize went to Una for her story of her friends who went above and beyond the call of duty. Una will be receiving a Women’s Podcast goody bag in the post.

Individual episodes of the award-winning Women’s Podcast can be downloaded on iTunes, Stitcher and Soundcloud or on irishtimes.com

If you would like to enter the Friendship Week reader competition, send your uplifting, amusing or poignant story of friendship to friendship@irishtimes.com by Wednesday the 10th of February. The entry should be no more than 300 words. Attach a high-res photo if you have one. The prize is a two night break in The Meyrick Hotel in Galway for you (and a friend.)