Professor whose NCAD tenure was transformative 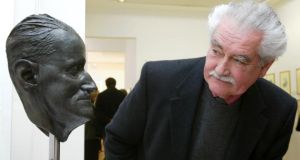 The extraordinary life of Campbell Bruce, who has died aged 87, encompassed an idyllic childhood on the historic island of St Helena in the South Atlantic. He was born there in 1927, a difficult and contrasting period in England, to which he had been brought by his mother in 1936, and during which he was evacuated at the age of 14 from his grandfather’s home in London during the Blitz. That was followed by an eventful and colourful career as an artist from the 1950s onward.

This culminated in his appointment in 1975 as professor of fine art at the National College of Art and Design (NCAD) in Dublin at a time when the college was recovering from a profound crisis in the early 1970s.

His tenure was transformative: as the present director of the NCAD, Declan McGonagle, put it to The Irish Times this week, “he [Bruce] really energised the department [of fine art] and established a new identity for the college.”

In the view of Oliver Whelan, a former student of Bruce’s and now a lecturer at the college, this was due to Bruce’s ability “to pull in all sorts of individuals” as teachers, who included internationally renowned artists including Nigel Rolfe, Joseph Beuys and Sean Scully (a former student of Bruce’s). The effect was “a renaissance in the NCAD which changed Irish art”.

Artist Robert Ballagh, a close friend for 40 years, told The Irish Times Bruce “was the very best type of art educator in that he never sought to project himself on to his students, but to liberate them”.

Explaining his approach, Peter O’Neill, a scholar whose unpublished PhD thesis deals with Bruce’s tenure at NCAD, said that this did not mean that students could just do anything.

“The big thing with Campbell was personal responsibility – he allowed his students to do what they wanted, as long as they could stand over it to him,” O’Neill added.

This was achieved in the face of an almost outright official opposition, according to O’Neill. “Campbell fought tooth and nail against the influence of the bureaucracy of the Department of Education.”

Bruce was himself, however, very much the classically trained painter, and remained so. After National Service in the Royal Army Medical Corps, he trained initially at the Croydon School of Art from 1948, and then at the Royal College of Art, from which he graduated in 1953.

Thereafter, he taught at art colleges at Croydon, Stoke-on-Trent and Canterbury before his appointment to the NCAD. In this period, from 1959 until 1975, he exhibited widely, including at the Royal Academy.

Robert Ballagh describes Bruce’s painting as “calm and assured”, executed with “great technical skill” especially in his watercolours which he “handled beautifully”, in a very demanding medium. Bruce had “a great way of using paint, very attractive, with no grand gestures”, he added.

Bruce enjoyed a late flowering in retirement, almost literally, in that his works, influenced by his passion for gardening, of densely detailed pictures depicting plant life and interiors, were renowned for their colour.

His paintings at an exhibition at the Ib Jorgensen Gallery in 2009 sold out.

In Ireland, Bruce and his wife became renowned for their support of young artists, attending, says Oliver Whelan, “every single opening”.

He remained very active in various art organisations and was elected to the Royal Hibernian Academy in 2005.

He is survived by his widow, Jacqueline (nee Stanley); children, Nichola, Claire and Jane; a sister, Ethel Freil, two sons-in-law, and grandchildren.