Emma Morano, the last living person known to have been born in the 1800s, celebrates her 117th birthday on November 29th at her home in northern Italy. Video: Reuters 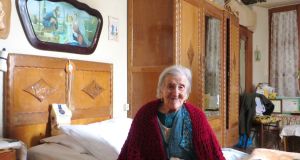 On a grey morning in Pallanza, a picturesque town on Lake Maggiore, in Italy, Emma Morano is sitting on her bed in her two-room apartment, wrapped in a red shawl. It is the week of her 117th birthday. Also present are Morano’s niece Antonietta, her grandniece Renata, her Colombian carer Mili – she has had 24-hour care for the past two years – and a group of journalists.

On the wall beside her bed hang photographs of her parents and other family. One picture, of a brother who died in an accident at the age of 31, is adorned with three edelweiss.

Morano smiles as she looks through our birthday gifts: she kisses the rosary and the picture of the St Mary; the votive candle of the Madonna del Sangue di Ré goes on the chest of drawers beside her bed.

Morano was born in Civiasco, a town in the province of Vercelli, in 1899. She was the first of eight children. As a teenager she loved waltz and tango. She still adores music. When Mili takes her smartphone out and plays Morano’s favourite song from her youth, Parlami d’Amore Mariù (Tell me about love, Mariù) Morano sings along, smiling mischievously and beaming with satisfaction.

During the first World War Morano’s fiance was called to the front. She never saw him again. She believed he had been killed in the war. Some years ago a journalist discovered that actually the young man returned from the war but was unable to find Morano, who had moved.

When she did get married it was to a man who turned out to be violent. In 1938 she separated from him and decided never to commit herself to anyone again.

In those days divorce wasn’t legal in Italy; even separation was a scandal. But Morano is proud to look back on a life as an independent woman. She worked first in a jute factory and then in the kitchen of the Collegio Santa Maria.

On March 10th, 1946, the day Italian women first got the chance to vote, Morano was already 46. Does she still vote today, and is she interested in politics? No, she doesn’t vote any more.

Her niece Antonietta, who is 75, visits regularly. She is the daughter of Emma’s sister Angela, who died at the age of 102. In the kitchen Antonietta is speaking on the phone with her aunt’s doctor, Dr Bava. Morano and her doctor are firm friends. When he enters the apartment Morano asks, “Who is it?” “Berlusconi!” he replies. (Morano detests the former prime minister, during whose time in office, at the time of the euro’s introduction, her pension almost halved.)

Bava believes that Morano’s love of life and positive thinking are major factors in her extraordinarily long life. Another decisive factor is her DNA, he says. As for her diet, well, her long life seems to be more in spite of than because of it.

Morano used to eat 500g a week of Gianduiotti, or Piedmontese hazelnut pralines, and swill whole glasses of honey. She loves biscuits, too. Mili soaks them in water to make them easier to digest.

Every day Morano still eats two raw eggs and has raw meat in broth. She drinks a litre of mineral water a day and eats a piece of banana every afternoon. She does not like tea or wine.

Morano’s life has spanned three centuries. Born in the Kingdom of Italy under Umberto I, she has seen two World Wars, the coming and going of fascism, and 11 popes. She prays a lot, she says, for her siblings and for her only child, Angelo, who died when he was only a few months old.

In Piedmont, especially in summer, to be bitten by vipers is not uncommon; there are still wolves in the Grande valley.

The young Morano left her native village with her family 100 years ago, when her father found work in one of the valleys surrounding Lake Maggiore. Civiasco, a mountain village about 40km from Pallanza, which now has just 250 inhabitants, is beautiful and secluded; many of its friendly yellow and orange houses are painted with frescoes of the Madonna; the home Morano was born in no longer exists.

Pallanza is proud of its most famous citizen and has dedicated a musical to her. It was performed on Morano’s birthday, on Tuesday, in a new theatre.

Although Morano has lived in Pallanza for 30 years many of the townspeople have never seen her and are familiar with her only through television. She has not left her second-story apartment, beside the Church of San Leonardo, for 15 years. Agostino, a painter, has been her next-door neighbour since the 1980s. “I’ve never seen her, but I know from her niece Rosi that she’s doing fine.”

“I’m doing really fine,” she confirms, “but my legs are weak.”

The clitoris has 8,000 nerve endings (and nine other things we learned from a new artwork)
9