Postcards Revisited: Where did Kilkee’s croquet and Christians go?

A series in which we return to the scene of John Hinde postcards. Part 2/4: much is unchanged in this Co Clare holiday resort, but a ‘small private hotel for a Christian endeavour movement’ closed in 2004 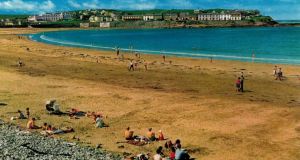 The John Hinde postcard of Kilkee 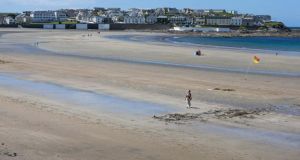 It is picture-postcard weather on the day I visit Kilkee, Co Clare. One of the best ways to see vivid blue skies and blue ocean in Ireland is on a postcard, courtesy of a filter. But on the day I’m there, the colours match the postcard in my hand.

More houses have been built on the brow of the hill behind the West End, but the West End itself looks remarkably intact. Walking along the beach, I’m struck that the red-and-yellow-striped lifeguard flag looks like it’s stuck in the same place in the sand. The beach is busy. There are people in the water; the obvious difference between then and now is that many of them are now wearing wetsuits.

At the far end of the West End is a row of houses of different heights. They are the same as in the postcard. The first two look beautifully renovated, but no one is home. The next two look like a single unit; the name Clar Ellagh is written across them. There is a For Sale sign in front and an overgrown front garden. At the next house, a yellow-painted bungalow, I spot a sunbather lying on a lounger. Usually, I do not interrupt people who are conducting their private business, especially those dressed for the beach, but I’m now five houses in, and haven’t a scrap of information. I stand at the gate and call out.

Verette Gabbett, the sunbather, invites me in to the garden at once, which just goes to show that Clare people are incredibly welcoming, no matter what the social situation (full disclosure: I am from the Banner County). We sit on a bench while she looks at the postcard and gives me chapter and verse on the West End.

The Clar Ellagh buildings beside Gabbett’s family’s holiday home used to be a “small private hotel for a Christian endeavour movement”. Her father, a Limerick auctioneer, conducted the auction in the 1940s. She fetches a couple of hotel brochures she kept as souvenirs. It operated as recently as 2004.

It opened that year from Easter until the end of August, offering full-board accommodation for up to 80 people at their “Christian Holiday Centre”, in a variety of rooms, including dormitories. “During July, August and the Special Interest Holiday weeks, bookings are from Saturday high tea to Saturday breakfast.” The only time I’ve previously seen the words “high tea” was in an Enid Blyton book.

There was, back in the 1940s, a competition held to choose a name for the new hotel, if an establishment with lots of dormitories can be called a hotel. More than 200 people entered. Gabbett isn’t sure what “Clar Ellagh” translates as, and neither am I. She says she never gave it a thought. Another programme? Something to do with Clare? One of the reasons Mr HC Parkhill from Portstewart won was that the initials CE also stand for Christian Endeavour.

The two houses had been trading as the Desmond Hotel, which had 16 bedrooms and two sitting rooms and dining rooms. Women in Limerick volunteered to sew sheets and curtains; as it was wartime, these could only be acquired with coupons. Second-hand furniture was brought from Dublin. It opened for business on July 21st, 1944. Its ethos was to provide good-value family holidays for those who wanted a “Christian atmosphere”.

Among the “special interest weeks” on offer in 2004 were “Holiday with Bible study”, and crafts including cookery. For the Bible study holiday, guests could expect that “each evening we will have a Bible study, with opportunity for reflection and discussion as we consider the relevance of the Bible for our lives today.”

Croquet was also on offer for all. “I remember people playing croquet on the lawn,” says Gabbett, looking over the wall at the long grass in the front garden. In 2004, Clar Ellagh held a 60th anniversary celebration, which she attended.

The place was put up for sale during the property boom times. The rumour is that it has now been sold. I hope someone, somewhere has records of the place, which is so rich in local history.

The key landmark building at the far left of the postcard was the Hydro Hotel. Holiday apartments now stand on this site. The Hydro had grass tennis courts out front, which were in use until the early 1950s. It is incredibly windy on the day I’m in Kilkee, despite the sunshine. I can only imagine the number of tennis balls that ended up on the beach, or in the Atlantic.

There was also a ballroom at the side, which at one point had its own resident orchestra. There was a cocktail bar and another croquet lawn. I had no idea that the seaside towns of my home county had hosted so many croquet lawns. The hotel in the 1950s was advertised as “the social centre of Kilkee”. I can see why. I’m only sad I can’t drop in for a cocktail.