Peter Hall: Director who shaped an era of British theatre 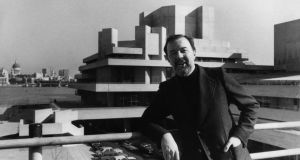 Peter Hall: the late director at the National Theatre in London in March 1976, just before its first public performance. Photograph: Dennis Oulds/Central/Getty

Peter Hall, who created the Royal Shakespeare Company at the age of 29, oversaw the UK National Theatre’s move to the south bank of the River Thames and exerted a commanding influence on theatre in the English-speaking world for well over 50 years, died on Monday in London. He was 86.

His death, at University College Hospital, was announced by the National Theatre, which gave pneumonia as the cause.

Hall was long acknowledged as the leader and prime defender of a profession whose artistic health was often imperilled by financial cutbacks and political hostility in the second half of the 20th century. That the period was regarded as one of the theatre’s greatest made his achievement all the more considerable.

The decisive moment, both for Hall’s career and the future of British theatre, came in 1955 with the arrival on his desk of a play by an unknown Paris-based Irish dramatist: Waiting for Godot, by Samuel Beckett. Hall passionately believed in the play without immediately understanding that it was a turning point in modern drama.

Although it was initially greeted with derision (“a remarkable piece of twaddle”, according to Bernard Levin), the Sunday notices by Harold Hobson, in the Sunday Times, and Kenneth Tynan, in the Observer, turned the play into a box-office hit and a national talking point.

Hall’s directorial reputation was made – and with reason, as it was he who had interpreted Beckett’s characters as tramps rather than clowns and who had realised the text’s austere music.

Hall also staged the premieres of eight of Harold Pinter’s plays, helped revolutionise the acting of Shakespeare and, as artistic director of the Glyndebourne Festival in England from 1984 to 1990, brought a new realism to the performing of classic opera.

He staged more than 300 plays at the National Theatre as its artistic director, from 1973 to 1988. He estimated that he had staged some 50 productions at opera houses around the world. In 1977 he was knighted by Queen Elizabeth II.

Hall had his share of critical disasters, although they were far outnumbered by his triumphs

Richard Eyre, his successor at the National, saw Hall’s work as being “true to the text, unostentatious, uncluttered, lucid, quite muscular and wonderfully accessible”.

Hall had his share of critical disasters, although they were far outnumbered by his triumphs. His staging of Verdi’s Macbeth at the Metropolitan Opera in New York, in 1982, with witches on broomsticks, was excoriated as over the top.

More typical was the praise showered on his 1989 Broadway production of Tennessee Williams’s Orpheus Descending. Frank Rich, writing in the New York Times, said Hall’s staging had brought “the action and language to the fever pitch of Gothic hallucination.”

On leaving the National, in 1988, Hall created the Peter Hall Company, a commercial enterprise that at one time had no fewer than five of his productions running simultaneously in London.

Peter Reginald Frederick Hall was born into a working-class East Anglian family on November 22nd, 1930, in Bury St Edmunds. His paternal grandfather had worked as a rat catcher at Sandringham, Queen Victoria’s Norfolk estate. Hall remembered his mother as “hugely ambitious” and in “a state of permanent fury” at his father, a railway stationmaster with “a sunny, controlled temperament and no ambition at all”.

Hall became an accomplished pianist and developed a passion for drama, especially Shakespeare, whose Macbeth struck him at the age of 11 as “thrilling and blood-soaked and full of witches”. By 14 he wanted to become a director.

At Cambridge University one of his productions drew national critics

He took the first steps in that direction at Cambridge University, which he attended on a scholarship. There he staged a number of well-received student productions, including Jean Anouilh’s Euridice and a revival of John Whiting’s Saint’s Day that drew national critics.

Another of his student productions, Pirandello’s Henry IV, proved impressive enough to be transferred to the small Arts Theatre in London. It was there that his post-Cambridge career took off. He read scripts, directed plays and, in January 1955, at the age of only 24, assumed full artistic control.

In 1956 he sealed his reputation as a glamorous high-flyer by marrying the film actor Leslie Caron. In a memoir she described him as “tall, handsome, brilliant, charming, ambitious” and “beguiling”. (The marriage would last almost nine years.)

His workaholic public life, however, damaged his private life. His second marriage, to Jacqueline Taylor, an RSC press officer, collapsed, and a turbulent third one, to the American singer Maria Ewing, also ended in divorce.

For Hall the true striving occurred in rehearsals. They were a voyage into the unexplored and unexpected

Truth and clarity remained his paramount goals, and achieving them on stage after much hard work was his principal joy in life. For Hall the true striving occurred in rehearsals. They were a voyage into the unexplored and unexpected, as he put it, with himself as “guide, philosopher, friend, conspirator, psychiatrist, actor, scholar, musician, editor, guru, politician and lover”.

“My definition of paradise,” he wrote, “is to be always rehearsing. A Shakespeare play followed by a Mozart opera.”