Patrick Logue: An open letter to Enda and Micheál 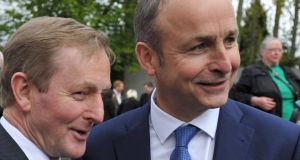 Dear Enda, Micheál and whatever Independents you have promised roads and hospitals to in the national interest.

There are 950,000 of us who paid our charges for water since you introduced them, Enda, and now that Micheál has forced the point and you have rolled over in the name of compromise and staying in power, and in the name of forming a government, any kind of government, we are really angry.

It is not that we wanted to have another bill come thudding through our letterboxes. Lord knows, it’s not as if electricity and gas and car insurance and every other unavoidable bill hasn’t gone up over the years of the recession. They have and we are still paying them. It is not as if wages haven’t been cut, taxes haven’t risen and life hasn’t been hard. It has been hard. But we are the kind of people who always pay our taxes, like them or not, and so we paid our water bills. We did so with heavy hearts but with hope that the leaks and the boil notices would be sorted and our children and their children would enjoy a quality water system.

We paid them because it was the law.

We are the fools; we know that now. We should have known that the two largest parties in the State would go for the populist option and put short-termism over common sense, party political sensibilities over future generations. But who cares? You’re back in power now.

And Enda, to think you swept the other crowd from power in 2011 with a promise that “the old ways, the old politics that created the crisis from which we seek to release ourselves from, will not do”.

A public patient could die of cancer waiting for an appointment for a life-saving scan. And now, this deal will take good taxpayers’ money and flush more lives down the toilet. But don’t worry: there won’t be a bill for the water in the toilet. Not for the moment anyway. There’s a commission for that decision. And for what? A shaky administration that will fall apart when it is politically convenient. At what cost? Oh my God, we are mad as hell. Did I mention that?

One eye on the Shinners

As for you, Micheál, call me a cynic, but have you an eye on the Shinners and the next election, or why have you selected water charges as the main issue for government formation?

Will you make Fine Gael deliver on the other issues in your manifesto? Abolition of the Universal Social Charge, anybody? How about the childcare support credit or that promise to reduce class sizes?

Will you insist that 250,000 jobs be created by 2021 or that the State pension be increased by €30 a week, as set out in your party manifesto before the election?

Yes, we are naive and don’t understand politics, and yes, we know compromises had to be made so that the country could be governed. But sorry, this is not good enough.

And then you are talking about refunds for those of us who have already handed over our hard-earned cash. Or you talk about the pursuit of those who haven’t paid their bills. Seriously, what do you take us for? Fools? Oh yeah, we are fools, but there’s nothing worse than an angry fool. We don’t forget easily. We will be waiting in the long grass or behind a front door the next time there’s a general election. We will know not to believe a word you say, and when people are on talk radio shows saying “They’re all the same: they’re only interested in power”, we will think to ourselves: They’re right.

And we will take inspiration from the government’s statement of common purpose document from 2011, which used the words of Albert Einstein: “Learn from yesterday, live for today, hope for tomorrow.” We will do that, and maybe one of these years we will get the decent government we need but probably don’t deserve.