Patrick Logue: A very Irish excursion to the Grand Hotel 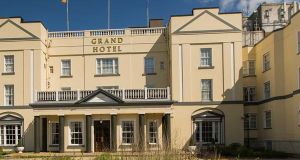 We went for afternoon tea in the Grand Hotel in Malahide recently. We all had a grand time. The weather was grand, but not that great. The food was grand.

We parked at the car park near Malahide Castle, a grand building set over many acres of fine land, and we visited the really excellent playground. After about an hour playing on the swings, roundabouts, zip wires and climbing frames, we walked through the forest into Malahide village. It was a grand walk.

The weather was cold enough and it threatened rain a fair bit but it was grand because we had all taken the precaution of bringing a warm, waterproof coat. We headed in search of the nearest pub with soup and sandwiches and maybe a pint for the nondriver, but unfortunately the pub was closed, it being holy hour. A number of people knocked on the closed door and gained entry. The noise of the television and the smell of beer escaped each time, as about five people in a row knocked and entered over the space of 10 minutes.

I wasn’t brave enough to knock and be refused, but it was grand because we were really only after some shelter from the biting wind, on-again-off-again sunshine and showers. We needed to kill an hour and a half to allow weary child legs to recover from the grand walk we had just undertaken.

We came across the Grand Hotel, which is set in front of a grand entrance and gardens and is pretty close to the water. We found out later that they had built a new grand entrance around the other side. We thought the hotel looked okay, so we said to ourselves, “Grand, this will do the job.” Grand job. Grand, so.

On the left was the still-closed bar, dark wooden furniture, dark red carpet, shutters still down on the bar with echoes of the night before.

I accosted a young gentleman who was in the process of delivering a lonely cup of tea to someone or other.

“When are you serving bar food?” I asked.

“When the bar opens,” he replied, not trying to be smart, although realising it sounded smart, and so following up with: “It should be open in about an hour, sir, but if you’d like to take a seat over there we can serve tea and sandwiches.”

“That’s grand,” I said, and we plonked ourselves down on comfy sofas near a large window. An English businessman was wrestling with two laptops and a phone, and the young gentleman delivering refreshments to tables tripped and spilled a decaf skinny latte all over his white shirt and close to his MacBook Air. We had front-row seats for the grand spectacle. The Englishman was grand about it, and the young gentleman apologised profusely.

We were in no hurry but proceeded to quickly order a couple of rounds of hang sangwiches for the kids, a cup of tea for herself and a scone with cream and jam for fatso here. The boys’ sandwiches came with Hunky Dorys crisps and some salad. Yin and yang. Herself ate the tomatoes from the salad, and I tried to eat the crisps. The children were having none of it, so I settled for the scone. Nobody ate the lettuce. We were having a grand old time.

“How is everything for you, sir?” asked the young gentleman in the beige shirt.

“Grand,” we all said in unison.

The English man, clearly listening in, hadn’t a clue.

A moment later I noticed that I had no knife to spread my lovely strawberry jam.

“Could I get a knife off you?” I asked the young man in the decaffeinated outfit.

“Certainly sir, I’ll be one minute,” he said.

“Grand so,” he said, and off he trotted.

“That’s grand,” she said. “We got out before the crowds.”

When I got into work the next day, a few people asked me how the weekend was. I said it was grand. How’s my sore back? Grand. But not in a good way.

Real croissants: How to make stunning French pastries at home