Patrick Freyne: Masculinity in crisis? It’s more of an opportunity

How to Be a Man: Now more than ever, who we are is not a matter of X or Y chromosomes 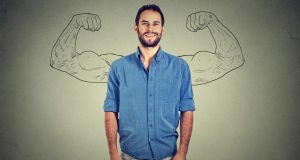 When I was about 10, my army officer father took me camping in the Wicklow Mountains. We whittled blackthorn branches, camped by a stream and ate sausages from a tin. From time to time I uttered coordinates into an army-issued radio.

“Why did we have an army radio?” I asked innocently 30 years later.

“Ah,” said my father. “You see, there were rumours of an IRA training camp in the mountains. My men were tasked with finding it. I thought that if I brought you it would just look like a man and his son on a camping trip.”

“I thought we were a man and his son on a camping trip,” I said, because this was the first I’d heard of this. I added: “Wasn’t that a bit dangerous?”

To this day, that is the most traditionally manly thing I’ve ever done: gone on a military stakeout I didn’t know I was involved in at the age of 10.

When it came to being a man, I got some rich messages from my dad. He was a tough, DIY-inclined, sport-loving army man who regularly jumped from helicopters into the Irish Sea. He was also a nurturing, nappy-changing father who did 50 per cent of the housework (this was pretty rare in the 1980s) and was married to a proud feminist.

My dad had no problem coping with sports-hating, artsy sons who would never be dropped from helicopters into anything. I once saw him wearing a shoulder holster while cooking potatoes. People with poor imaginations would call this “masculinity in crisis”.

I’ve thought about masculinity a lot. Masculinity is traditionally a narrow thing. It changes with time and context, but always gives the illusion of being constant and immutable. It’s pretty fragile, so it tends to go unquestioned.

I spoke to a lot of men for the How to Be a Man series about their sense of maleness. Most of them think about it only when they feel they are failing at it. The comedian Al Porter tells me that one surefire way to get a laugh at a live show is to “emasculate a man in the audience”. This is hilariously easy, he says, “because masculinity is so narrow”.

Traditionally, the best way to be masculine is to not be feminine, which has roots in misogyny and homophobia, Fear of feminine traits does seem to be at the core of a lot of male identity. When I was growing up, feminine traits included caring about your appearance, or being too expressive with your hands, or disclosing too much about your emotional state, or using a big word, or liking babies, or liking musicals or, God forbid, disliking sport.

I had all these traits.

“At 14 or 15, we already know something about other men, and that what we say and do has to be policed to please the male crowd,” observes O’Neill.

At college in the early 1990s, I took a gender studies class and found it hugely liberating, but I learned even more from female friends.

I remember one of them pointing out how the men in our group would often just automatically dominate the conversation. This is something men are taught to try to do. The wider culture collaborates with this notion that men have something important to say.

I try not to dominate conversations anymore, but as a now middle-aged man I have noticed that people don’t question me the way they do my female friends. It’s tempting to think that this is because I am scintillating and wise. The reality is that, due to my age, class and gender, some people project an authority onto me that I don’t have and don’t deserve. This is great for my self-esteem but bad for society.

The 1980s and ’90s saw a bit of a backlash against feminism (read Susan Faludi’s Backlash for an interesting take on how the media worked to undermine feminist messages). Some of the men I knew began to swagger and engage in “ironic” sexism. It became less and less ironic the longer they stuck around.

“Toxic masculinity” really does exist. There is a part of traditional male identity that is based on supremacy and domination – or, if you want to be kinder, competition and a desire to win. It manifests as predatory capitalism at the higher echelons of society and street violence on the lower rungs.

On the internet, it manifests itself in aggressive language, bad graphic design and a victim complex. On all levels it results in sexual entitlement, abuse of women and the repression of difference.

So some men turn into cartoons when threatened. And they do feel threatened. There are some challenging messages in feminism. Nobody likes hearing that sometimes they are the bad guy, that they have some power but that they need to be careful with it, that their achievements sometimes have to do with what they are rather than who they are.

Even sceptics benefit from social change. Rigid gender expectations are bad for people. It’s easiest to see this in the traditional prescriptions for Irish masculinity that look increasingly unhealthy – being unemotional and aloof, drinking heavily, ignoring your children.

In the recession, the notion that men were meant to be bread-winning providers took its toll on newly unemployed males. This was compounded by macho truisms about remaining taciturn in the face of upset. Thousands of men suffered in silence. Some of them didn’t survive it.

But what it means to be a man is changing. Feminists and gay and trans activists have, after years of struggle, opened up a world of possibilities for everyone else. Homophobia, which hurt all of us, has declined (though not gone away). Fathers now nurture their children, even though by the standards of another age this is deeply feminine. And mental health campaigners are dismantling the stoic unemotional male ideal. Men are allowed to be more complicated than they were.

Men, says Al Porter, “are more than one thing, You have this really vivid internal life where so many things are fighting for expression, but the idea of being a man is too narrow. It’s often an unemotional steady hand of manliness.

“The idea that you have more than one thing going on within you, that there’s a contradiction within yourself – people struggle with that, because we’re kind of encouraged to have one identity. But you contain multitudes.”

When people fret about a crisis of masculinity, what they are fretting about is an abundance of choice. There are now many, many ways to be a man. Today, in Ireland, we are increasingly able to choose what kind of men (or women) we want to be. If you want to retreat like a battery chicken into the tiny confines of the taciturn macho man, you are also free to do that.

There are still battles to be fought for true equality. There are old hang-ups to contend with and a few new ones as well (body image is a huge issue for younger men, Ray O’Neill tells me). Still, there is more of a sense now than ever before that who we are is not determined by our X or Y chromosomes.

This is good for women, but it’s also good for men. It’s not a crisis of masculinity. It’s an opportunity.

To add your voice to this series, email howtobeaman@irishtimes.com.