Our Wedding Story: The deal was sealed over a bag of spuds 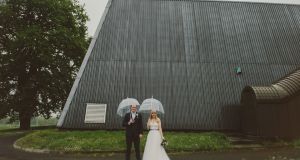 Siobhan, a drama teacher from Bundoran, Co Donegal, met David, from Sunderland, six years ago when they were both studying at the University of Sunderland.

“What started as a friendship brought us to where we are now,” says David, a health care assistant in Sunderland Hospital.

“Our first date was at an Italian restaurant and to this day I can still remember the way Siobhan looked and what we had to eat.”

He proposed in 2012 after asking Siobhan’s parents Bridget and Daniel for permission.

“I initially had the idea of taking her somewhere fancy. But one night I decided to just go for it. She left the house to pick up some things at the corner shop. I switched off the lights, lit some candles and waited for her to return – with a bag of spuds.”

On May 20th, 2016, David and Siobhan married in a civil ceremony in Sligo Park Hotel.

Siobhan’s favourite part of the day was her mother singing My Love is Like a Red, Red Rose by Robert Burns.

Following the ceremony, a trad band kicked off celebrations after which family and friends who travelled from San Francisco, Cuba and Spain sat down to a five-course meal and speeches – the groom’s favourite memory.

The bride’s sisters, Claire and Una, were bridesmaids and flower-girls were Sienna and Sommer Robinson. Liam Lloyd was the best man, John Marsh the groomsman and the groom’s parents are Norah and David Marsh.

The couple are grateful for family involvement in the planning of the day, which included design of the invitations by Siobhan and her cousin Michelle, a cake made by her aunt Marie and a special beer brewed by her uncle Peter – ‘Hoppily Ever After’.

Siobhan’s mother took charge of the decor and Kirsty Marsh, Sophie Elliott and Peter Milne, all did readings.

“It was only made special by the people who came to celebrate with us,” say the couple, whose first dance was to Bring Me Sunshine by Morecambe and Wise.

The newlyweds live in Sunderland and honeymooned in Killarney, Co. Kerry.