Ciara Lewis and Cathal Houlihan married in Kinsale, but planned it all from Sydney 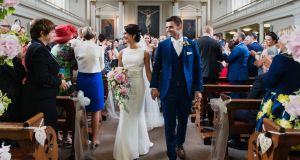 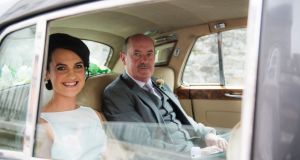 With a degree in business information systems from UCC, Cathal (34), from Co Tipperary, travelled to Australia in 2008 on a backpacking holiday with friends and decided to spend time in Sydney on a working holiday visa after the recession took hold in Ireland.

He met Ciara (32), who studied science in UCC and moved to Australia from Cork in 2009, on a night out with friends in a bar in Bondi Junction. Cathal proposed in Hunter Valley wine region over Easter 2014 and while the couple considered getting married in Australia, they eventually decided on Ireland. Soon after their engagement, they travelled home for a holiday and the groom, “a keen project manager” according to his wife, took charge of the wedding venue search.

From Australia, they used websites such as onefabday.com and weddingsonline.ie and, after making several appointments to visit venues in Tipperary, Cork and Kerry, they landed on Ballinacurra House in Kinsale, “and loved it the moment we drove up the long avenue”.

Among the challenges they faced when planning from abroad was the time difference and not being able to meet vendors, but Ciara’s mother, their wedding planner in Ireland, was extremely helpful as were Skype, Pinterest, and theknot.com.

Was there an upside to planning from abroad? “It helps when it comes to making choices and being decisive.”

The bride’s uncle had generously organised a webcast so that friends unable to attend could, through three video cameras set up in the church, view the full wedding ceremony from all over the world.

If there are any other couples planning their wedding from abroad, Cathal and Ciara – happily settled in Sydney for the foreseeable future – have some advice.

“Organise as much as possible before you go back to Ireland to minimise stress in the lead-up. You don’t need to return to Ireland weeks in advance as you can easily fill your time planning the minute detail. Spend time planning the things that really matter and everything else falls into place.”