Our Wedding Story: Love of musicals brings couple together

Michelle Orr and Keith Dunne got married in 2015 and for their first dance, the couple performed a choreographed swing dance to ‘We Go Together’ from ‘Grease’ 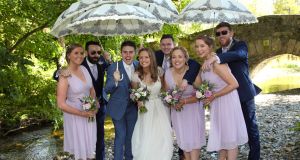 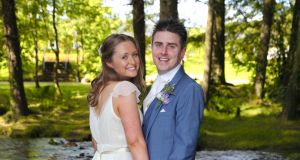 When Michelle, from Blackrock, Co Dublin, joined the Bray Musical Society in 2005 she met Keith from Bray and they became friends. In 2009, Michelle moved to London to complete a master’s degree in public archaeology and after hours of Skype calls and a few weekend visits, she and Keith became an item.

The couple moved in together in 2014 and during a holiday in Lanzarote that year, Keith surprised his girlfriend with an overnight trip to Fuerteventura where he proposed. For their first Valentine’s Day together, Keith took Michelle to BrookLodge, in Co Wicklow, where they have celebrated their anniversary every year since.

They were married there on 29th August, 2015, (“to give us enough time to honeymoon before the start of the Rugby World Cup”) in a civil ceremony with a religious blessing in Macreddin Chapel.

Music – from movies and musicals such as The Wedding Singer and West Side Story – was provided by friends from the couple’s musical society, Emily Carroll and Eimile Sheehy. That morning, Lyric FM played Come What May from Moulin Rouge, a song they had requested to hear while we were getting ready.

The bride’s parents are Ruth and Michael Orr and the groom’s are Hilary and George Dunne.

After dinner – 120 guests were seated at tables named after musicals Michelle and Keith had either performed in or seen together – came the first dance: a choreographed swing dance to We Go Together from Grease.

The newlyweds live in Bray with their dog Lizzy and honeymooned for 3 weeks in California and Las Vegas.

Sealing the deal: how to buy a house at the right price
8