Our Wedding Story: First kiss felt like ‘winning the lottery’

Just after Ian McCabe and Louise Moloney were married, the newlyweds decided to walk through St Stephen’s Green, where they were greeted with an applause from sunbathers, to their reception at the Shelbourne Hotel 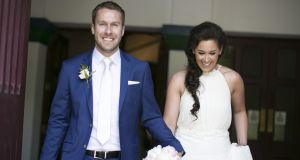 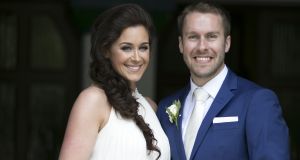 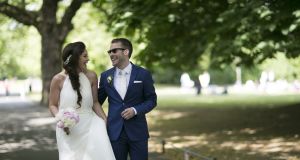 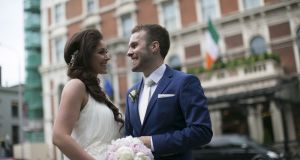 Ian McCabe and Louise Moloney Ian, account director at Publicis, met Louise, who works in finance at LinkedIn, in 2001 on a bus to Carlow for a college social trip when they were both studying at the Institute of Technology, Blanchardstown.

Friends for three years, they had their first kiss at the cinema on a night that Ian remembers, “being so happy I ran home feeling like I’d won the lottery. It’s a good 20 minutes – I don’t know how I did it”.

Ian and Louise spent their childhood summers in Ballymoney, Co Wexford, and Ian proposed on the beach there in 2014.

Louise was so excited her screams alerted night fisherman who spun their spotlights to the pair standing on the sand dunes.

Before their engagement, the couple had already started saving for their dream wedding.

On July 3rd, 2015, when temperatures hit 30 degrees, they were married by family friend Fr Colm McGlynn in the University Church, St Stephen’s Green.

Following the ceremony, and to applause from sunbathers, the bride and groom – with one groomsman and one bridesmaid – walked through St Stephen’s Green to their reception at the Shelbourne Hotel.

Louise’s parents are Violet and Eugene Moloney and Ian’s are Ken and Terry McCabe.

The main course – steak and chips – was a special request from the groom and the DJ was Al Gibbs, who both Ian and Louise remember playing on nights out in Dublin when they were younger.

Their first dance as a married couple was to Thinking of You by Sister Sledge.

Since getting married, Ian and Louise honeymooned in the Dominican Republic and have recently moved into a house in Castleknock.