Our Wedding Story: Finding love in the world of European politics 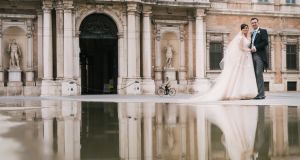 Colm and Margherita were both national delegates to a pan-European political party – he the organisation’s secretary general, having previously been the Irish delegate and she the permanent delegate of her Italian national party – when they first met.

Through their work, they ran into each other in various European cities and it was in Tirana in Albania where their relationship began.

“One of our friends, a Croatian politician, quipped that by finding each other though politics, we had ‘found love in a hopeless place’,” says Margherita, who until recently worked for the International Labour Organisation in Geneva.

After three years together, Colm proposed last January during a trip home to Dublin and the couple married in Margherita’s hometown of Modena, in northern Italy, on April 30th, 2016.

“When we saw each other in the church after a traditional two days apart, it was a very moving moment. And Colm surprised me by speaking Italian throughout the entire ceremony,” remembers the bride who wore a Monique Lhuillier creation and Giambattista Valli stilettos, customised by her friend – and witness – Mariavittoria, who works in the luxury footwear business.

Colm’s witness was his brother Peter and their parents are John and Angela. Margherita’s mother and father are Donato and Monica.

After the ceremony in the Palladian Chiesa San Giorgio, cocktails were served in the piazza followed by an evening reception at the Galleria Estense – the first private event ever hosted by the renaissance gallery. During dinner – for which food and wine pairings were selected and prepared by the sommelier of the city’s three-Michelin-star restaurant Osteria Francescana – 180 guests (with 18 nationalities) were surrounded by masterpieces by Velazquez, Tintoretto and Bernini with tables named for their proximity to paintings and sculptures.

The couple used local specialities and suppliers for all aspects of their wedding – prosciutto di parma and parmigiano reggiano served during the aperitovo and dinner; the bridal dress and shoes which were created in nearby Parma; and Maserati cars, manufactured in the town.

The newlyweds, who plan to settle in London where Colm now works in finance, honeymooned in Sicily.