Olivia O’Leary: Why was the State so reluctant to warn mothers about dangers of thalidomide?

In the Story Times episode of The Women’s Podcast, the RTE broadcaster recalls breaking the drug scandal story in 1972 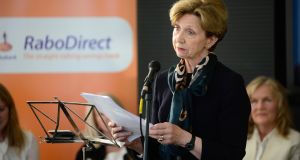 “He said that the then minister had the choice of either terrifying mothers who might or might not have taken the drug - or not terrifying them , when one or two mothers might indeed take the drug and bring into the world a deformed child.”

Every so often in journalism, you get a real sense of what Charlie Chaplin tried to portray in his film ‘Modern Times’: the struggle of the individual against the mighty and deadening power of industry and of hierarchy.

I got that in the radio documentary we did in 1972 on the Irish Thalidomide experience when Irish parents of thalidomide sufferers started to campaign for compensation. What we did was to help establish that the Irish government had to take their share of the blame.

Thalidomide was supposed to relieve nausea in pregnancy. In fact it produced abnormalities in the limbs of children subsequently born.The drug sold in Ireland, it was called Softinon here, was manufactured by Chemie Grunenthal in Germany and distributed here by Whelehans. On this story RTE gave researcher Aileen O’Doherty and myself two whole precious months to travel through Germany and to trawl through archives and documents here.

What we discovered was that Thalidomide was withdrawn in Germany on November 26th1961 at which stage the company said it issued notices to its Irish distributors and to the Irish government which was the licensing authority. But at no stage in the next six months did the Irish Department of Health, who were the body responsible for licensing and allowing the importation of the drug , nor the distributors, Whelehan’s, issue any sort of public warning.

Was there even any sense of urgency about withdrawing the drug? Well, my researcher Aileen Doherty, a former nun, spent day after day after day sitting in the offices of Whelehan’s, the distributors, asking for a copy of the withdrawal slip. And they would say we can’t find it or so and sos not here and Aileen would smile sweetly and say that she would wait.

Days later,when they produced it, it was the usual withdrawal slip issued to pharmacies for batches of medicines which have gone out of date. No urgency at all.

So there were people who took it off the medicine chest shelves at home. In the UK, at least 20 children were born showing typical thalidomide impairments - more than nine months after the drug was withdrawn there. And there were such cases here.

Mrs Margaret Brennan Halad of the Committee of Justice for Irish Thalidomide Children was one. And Dr. John O’Connell, in his time Minister for Health. said he was still able to still buy Softinon over the counter in a chemist shop down the country in 1964, two years after the Irish government said it had all been withdrawn.

After we discovered all this, we asked for an interview with Erskine Childers, the then Minister for Health in 1973. It was very clear that that he was uncomfortable defending the way the crisis had been handled twelve years before.

When I asked him why a public warning had never been given , he said, and I quote from the Irish Times account of the interview carried on the front page next day, that the then minister, the minister in 1961, felt it was unlikely that many expectant mothers would have taken the drug and he did not want to alarm those who might have taken it during pregnancy.

He said that the then minister had the choice of either terrifying mothers who might or might not have taken the drug - or not terrifying them , when one or two mothers might indeed take the drug and bring into the world a deformed child.

I was shocked needless to say. He was embarrassed. But I also knew we had the admission that we needed - that the government had taken a deliberate decision not to warn mothers.

The thalidomide parents hopped on that admission the next day when they went to see the Minister. Mrs Margaret Brennan Halad said that the Minister was now doubly responsible:

”He said on the radio that the Minister for Health at the time did not want to alarm people by making a statement about thalidomide in 1961. If he had made that statement my child would not have been born deformed in October 1962.” By the time the parent’s deputation came out of his office, the minister had promised to reconsider Irish government funding.

As it happened an election was called the following week and the new Labour Minister for Health, Brendan Corish, gave a capital sum to the thalidomide children which was four times what the German government had offered them and established a state payment linked to inflation to those people who had suffered from thalidomide.

And even then Corish had to fight the civil servants in his own department. The secretary general of the Department of Health kept on sending papers over to the cabinet which had actually reduced the agreed sum to be paid to the thalidomide parents and children.

The payment, as we now know, has not been adequate to meet the needs of thalidomide sufferers over the years, but it was a start and a recognition.

I was conscious of all the hierarchies we’d had to fight along the way: the industrial hierarchies because the German government were so proud of their big pharmaceutical firm Chemie Grunenthal, they didn’t want to know about this story. The civil service hierarchy. The civil service didn’t want to have the government to admit there was any culpability because then it was obvious they would be regarded as having been at fault.

But of course there was another hierarchy and it’s the last question I’ll pose. Why was the State so reluctant to give a public warning about the dangers of thalidomide? I’ve no doubt, though it wasn’t said at the time, that it was because of the fear that women who worried about having a child with deformities might, just might, go to get an abortion and that the shadow in the background there was the Catholic church

I like to think our programme helped the brave parents in some way to achieve that payment. You need time and you need money to do such programmes. We got both then and I wish we had more of both now.