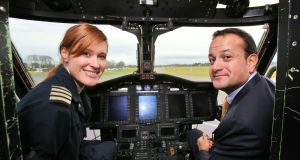 Dara Fitzpatrick, who has died aged 45, was the captain of a Coast Guard helicopter, Rescue 116, which came down in sea off northwest Mayo with the loss of all on board.

Capt Fitzpatrick’s body was recovered shortly after the tragedy late on Monday, March 13th, as members of the Coast Guard, the Air Corps and people from the coastal community around Belmullet continued to search for her crew colleagues, pilot Mark Duffy and winchmen Ciarán Smith and Paul Ormsby.

Capt Fitzpatrick’s father, John Fitzpatrick described his daughter as “beautiful, inside and out”. Her sister Niamh spoke of the family’s devastation at their loss.

Tributes on behalf of the people of Ireland were led by President Michael D Higgins, who expressed the nation’s gratitude for the “courage, resolution and exemplary commitment to the aims of the Coast Guard that Capt Fitzpatrick and her colleagues have consistently displayed”. It was, said the president, a “dark day in the history of the Coast Guard”.

From Washington, the Taoiseach Enda Kenny expressed condolences to the Fitzpatrick family, as did the chief of staff of the Defence Forces, Vice Admiral Mark Mellett.

Dara Fitzpatrick grew up in Dublin. At school, her interests centred on economics and business, she confided in an RTÉ documentary many years later. She said they were all she ever wanted to do, until, aged 18, she heard an advertisement for half-hour rides on a Robinson helicopter and was smitten. “I didn’t think of anything else from that day on,” she said.

She gave generously of her time to schools and youth groups, telling them of her work as a pilot and the work of the Coast Guard in general.

Mark McGibney of the Royal National Lifeboat Institution, Dún Laoghaire, said Capt Fitzpatrick was devoted to her helicopter and loved sharing her enthusiasm for it with others. “She would not leave the helicopter. She wanted to stay there and she wanted to show it off to everybody – ‘I’m the captain’ – and she’d be dragging children, parents on [to it] and that was just the way she was about her job, how passionate she was about it. She wanted everybody to know about it, she was so proud of her team and her helicopter and she wanted everybody to know about it,” he said.

Capt Fitzpatrick worked for CHC, a private company providing helicopter search and rescue capability to the Irish Coast Guard. On Monday night, her Sikorsky helicopter, Rescue 116, was deployed from Dublin to give “top cover” to another helicopter, Sligo-based Rescue 118, that had been dispatched on a mission off the west. An injured fisherman needed airlifting to hospital from a UK-registered trawler some 140km off Belmullet.

The job of Capt Fitzpatrick and colleagues was to provide watchful eye assistance to Rescue 118, hovering well above the airlift operation and advising as necessary. However, before venturing out, Capt Fitzpatrick scheduled a routine refuelling stop at Blacksod.

Apparently approaching to refuel, something happened and radio contact was lost. For reasons as yet unknown, Rescue 116 crashed into the sea with the loss of all on board.

Expressions of condolence and solidarity flowed swiftly from the SAR community throughout these islands and from as far off as north America and Australia.

Despite the danger inherent in her work and the drama attending it, Capt Fitzpatrick never doubted her calling. “We see difficult things at times,” she said in the RTÉ documentary. “It can have its tough times and it’s stressful but we absolutely love it. We love rescuing people. We’re all very dedicated to it and there’s no way in the world we’d do anything else in life.”

‘The light of her life’

“She lived her life to the full. She loved what she did. She wanted to be a mother, she adopted Fionn. She absolutely adored him and, they say it takes a village to raise a child and he has a village around him now who will raise him on her behalf.”

Three years ago, Dara adopted Fionn, who had lost his birth mother. He was “the light of her life,” according to her mother, Mary Fitzpatrick. Mary said her daughter was “kind and lovely girl” and a “great mother”. Niamh said Fionn was now surrounded by a family that would raise him as his mother would have wished.

In 2010, Dara Fitzpatrick received an award for her role in rescuing a pilot whose light aircraft ditched into the Irish Sea. In 2014, she captained the first all-female Coast Guard mission when she and a colleague flew a cardiac patient from west Cork to Cork University Hospital and then transferred a critically ill five-year-old to Temple Street Children’s Hospital in Dublin.

Capt Fitzpatrick is survived by Fionn, as well as her parents, John and Mary Fitzpatrick, her sisters Niamh, Orla and Emer, and brother Johnny. She was predeceased, 39 years to the day before her own death, by a sister, Anna, who died at birth.