Reluctant banker and ‘one of Ireland’s finest artists’ 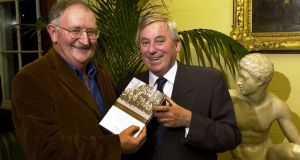 Artist and former banker Bob Ryan (left) with Maurice Manning at the launch of Ryan’s book With A Tap On The Knee – Memoirs Of A Reluctant Banker in 2001. Photograph: Matt Kavanagh

Bob Ryan, artist and former banker, who has died at the age of 86, spent most of his time in the world of finance longing to paint whenever he chose. His dream was ultimately fulfilled when he retired after more than 35 years in banking.

Twelve years ago this week, in an interview in these columns, he spoke of a deep-seated desire to be free to devote himself completely to painting. Until his retirement in 1985, he had led something of a dual existence by managing to mould his desire to paint, around the day job. “I was doing in my spare time what I would have liked to have done full-time,” he said.

Born in Tramore, Co Waterford, he had a peripatetic life, first moving to Cork at the age of three when his father, also a banker, was transferred, followed by a move to Dublin. Ryan later returned to Cork and then it was back to Dublin plus a move to London with AIB.

Educated at Presentation College, the story goes in the Ryan family that he never passed an exam. In his eulogy, his son, Eamon, TD for Dublin Bay South and leader of the Green Party, explained: “He was a romantic and a dreamer. I asked him once was he much good at football as a kid, he admitted no, he spent too much time during the game looking up at the clouds . . . There was no hint of a leaving certificate and the only exam he ever passed was a tap on the knee when joining the Munster and Leinster bank, to prove beyond doubt that his nervous system worked.”

Paying tribute to his old friend, Dr Maurice Manning, chancellor of NUI, described it as one of the funniest and wisest books on Irish banking. Observing that its predictions were written pre-crash, he said Ryan had “sadly” foreseen “much of what subsequently happened”. Describing him as “one of Ireland’s finest artists”, he added: “Most of all he was a wise, honourable and delightful man and will be greatly missed”.

Whatever about passing exams, Ryan proved to be a talented draftsman in his teens and attended classes in painting and drawing at the school of art, then located in Cork’s Crawford Gallery. He later attended the National College of Art and Design, studying under some of Ireland’s greatest artists, including Seán Keating and Muiris Mc Gonagle, who laid the foundation of a highly successful painting career.

During his banking career, he made lifelong friends, including fellow artists Tony O’Malley and Jim Manning with whom he later exhibited. When he retired, the family built him a proper studio in the garden. Besides enjoying the satisfaction of painting whenever he chose, he found fulfilment working as editor of a revived Dublin Opinion and as fundraiser and spokesperson for Cerebral Palsy Ireland.

He is survived by his widow, Mary, their children John, Eamon, Robert and Marion, his sisters Barbara, Helen, Margaret and Susan.

First Look: Dig In, the Maser-curated ‘art diner’ that’s about to open in Dublin
4

What will happen to house prices after lockdown?
6

Off the charts: why this paint colour is Instagram's favourite
10