‘Next thing the boat shuddered’: an Irish activist recalls sinking of ‘Rainbow Warrior’

Grace O’Sullivan joined the Greenpeace ship’s crew in 1985, intent on stopping nuclear tests in the Pacific, but the French secret service had other ideas 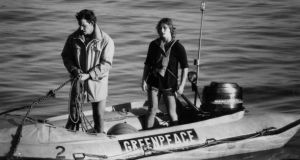 Then: Grace O’Sullivan was on board the Greenpeace ship when it was blown up in 1985 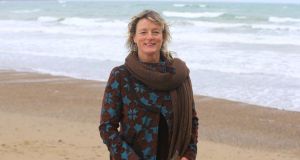 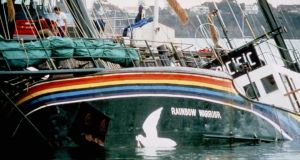 The Rainbow Warrior: the Greenpeace ship in Auckland harbour after French agents blew it up in1985. Photograph: Reuters

Grace O’Sullivan vividly remembers the first time she caught sight of Rainbow Warrior. “I was about 17, and I saw it in a port in the Netherlands,” she says. “I was visiting my brother, who was living there. I was really impressed by the layout of the boat and the colours of the rainbow and the dove. It was beautiful.”

The vessel made such an impression on O’Sullivan that when she returned home she wrote to Greenpeace, the environmental organisation that owned the ship. She had quite the CV – she had grown up beside the sea, in Tramore, Co Waterford, was one of the first woman lifeguards on her local beach, was a member of the lifeboat team, and in 1981 was a winner at the All-Ireland surfing championships – but it was a number of years before a call came, out of the blue, offering her the chance to go aboard a Greenpeace boat, Sirius.

“I really didn’t have time to think about it,” the 53-year-old says. “I had about five days to get to the ship, so I just said yes. I was living with my parents, and they supported it.”

O’Sullivan’s first mission brought her to the freezing seas of Norway, where she was “pelted with tomatoes” by angry sailors intent on culling seals. She had been thrown in at the deep end – and found herself in awe of “this multinational, multilingual, multicultural” operation.

Shortly after that campaign she was asked to join Rainbow Warrior. When she boarded, in Florida in February 1985, she knew she was getting involved in a major action. She had little idea that it would become the group’s most notorious mission.

After an “amazing” five-month journey through the Pacific the flagship sailed into Auckland, where it was greeted by a flotilla of anti-nuclear boats. “There was a great sense of camaraderie,” says O’Sullivan. “The New Zealand office was very vibrant. This was where we were going to stop, refuel, reprovision and get ourselves organised.”

The next stop was the Mururoa atoll. The French secret service, the DGSE, had other ideas. Shortly after Rainbow Warrior arrived in Auckland its captain, Peter Wilcox, told half his crew, including O’Sullivan, to go ashore on two days’ leave.

On the night of July 10th, 1985, “the others were on board, celebrating the birthday of Steve Sawyer, the campaign manager – probably hanging around the mess room, chatting and having a few drinks. Next thing the boat shuddered.”

The first mine had exploded. At first, everyone stayed put. But as soon as the ship’s chief engineer, Davey Edwards, went down to the engine room and saw water flooding in, Capt Wilcox ordered them to abandon ship.

“At that point nobody had any idea it was a terrorist attack,” says O’Sullivan. “Everyone jumped up on to the quayside.”

After 10 minutes the ship’s photographer, Fernando Pereira, went below deck to retrieve his cameras. A second mine exploded, and the 35-year-old was trapped by the water that rushed in.

“When they did the autopsy they basically found that he had drowned,” says O’Sullivan. “Water started pushing down from the deck area and locked him into his cabin. I knew Fernando well. Crews get very close.”

It was later discovered that the mines had been planted by two members of the DGSE, both of whom were sentenced to 10 years in prison.

In the years after the attack a deal was struck. France paid compensation to both Pereira’s family and New Zealand; the perpetrators were sent to nearby French islands, then released after two or three years.

Submerged in the harbour

Months later, as the investigation surrounding the bombing continued, O’Sullivan and four more crew from Rainbow Warrior boarded another yacht, Vega, and set sail for Mururoa. Not long after arriving at the test site they were seized by French commandos.

“They put us on board one of their military vessels,” O’Sullivan says. “They kept us there for the best part of a week, I think. They were very nervous and didn’t really know what to do with us. I remember they flew me to LA first, and I had two armed guards there who brought me out ahead of everyone else for my flight to Madrid. I was young and female, so everyone was looking at me, wondering who this girl was and what had she done.”

Eventually O’Sullivan made it back to Dublin, where she was met by her relieved family.

After the controversy France bowed to pressure and suspended its nuclear tests – but in 1995 it restarted them, to widespread condemnation.

O’Sullivan would go on several more Greenpeace missions. She spent 18 years working at its Amsterdam offices. Afterwards she studied field ecology at University College Cork, and last year she stood for the Green Party in an unsuccessful run for the European election.

She remains passionate about the environment and believes that, now more than ever, there is a real need for radical activism.