Being a black family in Ballyfermot: ‘There was no hostility’

Although Ireland was welcoming, finding employment was difficult for Somali science teacher Abdullah Hersi, who arrived in Ireland in 1991 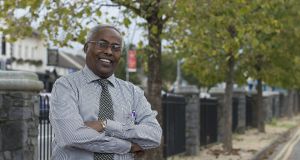 Abdullahi Hersi: ‘People were open and straightforward. They wished you well. I think the Irish, by nature, are friendly.’ Photograph: Dave Meehan

When Abdullah Hersi arrived into Shannon Airport on April 4th, 1991, he planned to spend only a few hours in Ireland before continuing his journey to Canada. Following the advice of a travel agent he met in Jordan, he had booked flights via Amsterdam and Shannon en route to Cuba. The goal was to disembark in the remote town of Gander in Newfoundland while the Russian aircraft refuelled before continuing on to Havana. However, upon arrival in Shannon, Hersi was transferred on to a direct flight to Cuba.

The Somali science teacher found himself boarding a flight to Havana where, upon arrival, he was refused entry. “They knew a Somali wouldn’t come all the way to Havana as a tourist. They made fun of me and said, ‘You know your money will be finished here in two days. The immigration authorities told me, ‘You will be going back on that same plane.’ You’re going back to where you came from.”

Sitting in the living room of his Ballyfermot home, Hersi recalls the series of events that pushed him to seek asylum in the early 1990s. Due to Somalia’s economic crisis, he had to leave behind his wife and young children in the mid 1980s and find work in the Middle East.

He spent seven years working in Kuwait sending money to his family until summer 1990, when Saddam Hussein’s Iraqi army invaded the country. Hersi joined a group of Somalis who escaped the country into Iraq and then Jordan, where he began investigating how to fly to Somalia. However, with civil war raging in his own country, Hersi realised it was near impossible to return home and opted to travel to Canada. Once settled he planned to bring his family over to join him. Instead, after a return trip to Cuba, he found himself in Ireland.

After two weeks in Ennis he moved to Dublin, where he stayed in a Red Cross hostel. He quickly discovered there were no other Somalis in Ireland. Nearly three decades on, he remains “100 per cent sure” that he was the first person from Somaliland to move to Ireland.

“All I knew was: I’m a stranger here. I was used to being thrown into a strange place because of my time in the Middle East but I had no choice about going back home. It was the height of the civil war. I was missing home and because there was a war I’d think: Will I ever see my wife and kids again? I’d ask, Will I die here alone?

He dealt with his homesickness by enrolling on a diploma programme before moving on to a degree in business studies at UCD. In 1994 his wife and six children came to Ireland through family reunification. Asked to describe the day his loved ones arrived into the airport, his face breaks into a broad smile.

“I can’t describe what it was like. I was somewhere between the air and the sky. I couldn’t believe it. My wife, my children, in Ireland? I could not sleep the night before, just coping with the dream that was coming to realisation.”

The family spent a short period in accommodation on the grounds of Cherry Orchard Hospital in west Dublin – along with about 300 Bosnians who had fled the war in the Balkans – before moving into their Ballyfermot home. The only black African family in the area at the time, they were considered “a novelty”, he says. “First people looked at us strangely, but then they get used to you. There wasn’t any hostility at all. As a family we’re lucky it was a positive start. People were open and straightforward. They wished you well. I think the Irish, by nature, are friendly.”

Finding employment, however, proved to be much more difficult. Eager to secure a position in financial services or insurance, he sent out hundreds of CVs but could not find work.

When a Somali friend suggested he try working in security, he was reluctant. “It felt unacceptable to me. I was a graduate. But then I realised it was a source of income, I had to be flexible.” Hersi went on to spend the next 10 years working night shifts guarding business parks and offices across Dublin.

“It was work, and work is better than sitting. It taught me if you don’t get what you want in life you have to be flexible and see what else you can do. The fact is I don’t see security as lowly work now. I got good training; I learned how to defend myself and what to do in times of crises.”

In the late 2000s, when the company began to struggle under the strain of the recession, he accepted a redundancy package and took early retirement. He now dedicates most of his energy to his work as chairman of the Somaliland Community of Ireland, which he co-founded in 1997 as a network for the nearly 1,000 people who have come to Ireland from the small African nation, which gained independence in 1991.

Hersi, who now has Irish citizenship, visited Somaliland for the first time in nearly three decades in 2013. While he found the country had progressed economically, he also discovered a nation directly exposed to the harsh forces of climate change in the form of extended periods of drought. “It felt very much like home, with familiar faces and familiar places. But climate change is a real problem. There’s a shortage of water and that’s why so many animals are dying.”

Back in Ireland, Hersi’s children all live locally, and his two youngest daughters recently graduated from DIT. “With respect to my children, I would say they are educated. There are on the right path. Overall the family is in a better position and we’re part of this country. We have double homes now: we have here and our homeland.”