New to the Parish: ‘Ireland is like a chicken in a battery farm’

A Bolivian activist in Dublin feels a connection with Ireland because of the history of colonisation, but he feels many mistakes were made as the economy boomed 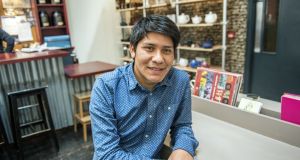 Victor Flores: “The city’s libraries are always filled with people and I love that. Sometimes there’s no space for me to sit down.” Photograph: Brenda Fitzsimons

Victor Flores always imagined Ireland to be a big country. “I thought of it as a huge place because so much has come from this country: Halloween, Dracula, Oscar Wilde, ” he says. “But when I arrived I realised it was minuscule, with a tiny population of only 4.5 million people.”

The Bolivian activist arrived in Ireland in November 2013 with his English wife, Joanna Orr, whom he met while interning for a charity in the mountainous city of Sucre. Flores fell in love with Orr’s social conscience and determination to bring an end to social injustices in Latin America and in Europe.

“She was aware of her privileged position as a European. Because coming from Europe is a privilege. We shared a vision of the world and enjoyed talking about politics and in the end we fell in love.”

Flores was born in Sucre but grew up in Potosí, a Unesco world heritage site and a city renowned for its silver mines. It is also one of the highest cities in the world at more than 4,000m above sea level.

“It was once an extremely prosperous city, but now there is huge poverty,” he says. “My parents were from Potosí, so we moved back to be close to family.”

He returned to Sucre after school to study psychology and sociology at university. He also became involved in human-rights groups and campaigns calling for justice for the most vulnerable in Bolivian society. Influenced by his parents’ degrees in philosophy, he spent his time in university questioning the society he lived in.

“I wanted to understand what it meant to be a human being. I didn’t want to let life pass me by without taking the time to learn about our existence,” he says.

Soon after he met his wife, the couple began to discuss moving to England.

“Initially we tried to move to England to be closer to Joanna’s family, but there were two requirements needed for a visa that I struggled with. Joanna had to earn at least £18,000 [about €23,000] per annum, while I needed to be able to speak a decent level of English. It seemed love was unable to break down all barriers, at least not the barriers put in place by the UK government,” he says.

Orr suggested they try living in Ireland, the home of her grandparents. “She told me, ‘I think we can create a good life for ourselves in Ireland. You can learn English, I can study my master’s at Trinity College and we can easily visit family in the UK.’ ”

Flores was nervous about learning English and being able to communicate with people in his new home. As a teenager he spent a month in Germany and struggled to learn the language.

“Learning languages has always been a traumatic experience for me. Language is so connected with our emotions, and I don’t have that ability Noam Chomsky describes as ‘universal grammar’. Honestly, it has been extremely difficult for me to learn English since moving to Ireland.

“What’s more, I never wanted to learn English while in Bolivia because it was so connected with gringos from the United States. I associated it with invasion and colonisation,” he says.

Despite his initial reluctance to open up to the English language, he has spent the past two years studying day and night to improve his linguistic abilities. Although he is more comfortable being interviewed in Spanish, his determination and drive to learn English is clear.

As well as attending English classes, he has worked in coffee shops and restaurant kitchens since moving to Dublin. His wife now works in Trinity College Dublin. He likes living in a country that, like Bolivia, was once colonised. “Irish people understand what it means to be an immigrant; they haven’t forgotten that feeling of what it means to be colonised.”

There are many opportunities available to immigrants in Ireland, but Flores says Ireland’s economy has grown so rapidly that many mistakes have been made along the way.

“Ireland is kind of like a chicken in a battery farm: it has rapidly developed strong muscles but is missing its full anatomy. It’s missing its bones. Obviously Dublin has companies like Facebook and Google, but meanwhile it has a terrible transport system and a housing crisis. We’re living in a country where it’s easier to find work than to find a place to live,” he says.

He was shocked to discover that abortion was not available to most women in Ireland and he is involved in the campaign to repeal the eighth amendment. “I was appalled when I realised the situation for women here and the State’s relationship with women. Even after Savita Halappanavar, the X case and the Y case, nothing has changed. Women should have the right to decide what happens to their own body. It’s so basic. It’s a human right.”

Nevertheless, he is very happy to call Ireland his home. He says Irish people have a passion for learning and he loves to see so many gather in the city’s public libraries.

“They’re always filled with people, and I love that. Sometimes there’s no space for me to sit down,” he says.

“I also really like the gardaí because they don’t carry guns and that makes me feel safe. They’re very friendly; they even let me take a photo with them on New Year’s Eve. It’s such a pity that since the Brussels and Paris attacks some of the gardaí now must carry weapons.”

Flores is a volunteer presenter on Radio Latina, a community station on Near FM, and also dances and plays music for a Bolivian folk group. There are only 200-300 Bolivians living in Ireland, and Flores hopes to bring them together and create a community where people from his home country can meet and socialise.

“We have all come here for better work and a better life than what we had in Bolivia. But I want to create a community where immigrants can come for support when settling into their new lives here. Bolivia has a tradition of creating unions and developing bonds. I want to build that for Bolivians in Ireland,” he says.