New to the Parish: 'I wouldn't label Irish people as outgoing'

A series about the lives of recent arrivals to Ireland. This week: A Mormon from the US finds Irish-style dating shocking and wishes Irish people could learn to be happy and confident without alcohol

Eric Davis's Mormon faith helped him make friends when he moved to Ireland from Utah two years ago for work. Since then, he's learned a lot about Irish drinking and dating, and developed a love for the Irish countryside. Video: Kathleen Harris 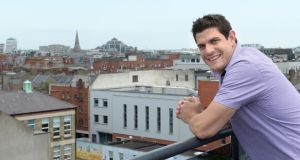 Eric Davis thinks going to pub is boring: ‘Everyone is drinking and that’s where they get their thrill, their adrenalin from.’ Photograph: Dara Mac Dónaill

Eric Davis landed on his feet when he first arrived in Ireland. The software company where he works organised a penthouse apartment in central Dublin for him, and within a couple of hours of stepping on to Irish soil he had already made friends.

He grew up in a Mormon household and was eager to reach out to the small community of the Church of Jesus Christ of Latter-day Saints in Ireland before moving halfway across the globe for work.

“There’s a Facebook page for young people so I wrote on it saying this is where I’m living and asking which church I should go to. I landed on the Sunday morning, dropped my suitcase at my apartment and went straight to church.”

On his first day in Ireland he met a group of young people from the Mormon church in Terenure, who automatically welcomed him into the fold.

“Most of them are Irish. There are some other Americans who are over here working and there’s some French and Africans. A little bit of everybody.”

He finds Irish people warm and friendly, but he thinks those outside the church are very different to friends back home. “I wouldn’t label Irish people as outgoing because compared to Americans they’re just more reserved. They’re not as confident. The activities they do are different.”

He describes the Irish dating style as “shocking”. It drives him crazy.

“You meet somebody at a club, and a week later you go back to the club, meet them again but make sure that you’re drunk before you meet them. And then maybe, after multiple times of doing this, you actually go on a date.”

Members of the Mormon church are opposed to drinking alcohol, smoking and sex before marriage.

Why can’t Irish people just be confident and happy sober, he wonders with bemusement.

He thinks going to the pub is boring. He only goes when it’s with work. “Everyone is drinking and that’s where they get their thrill, their adrenaline from.”

An outdoorsy type, he gets his own adrenaline rush in outdoor activities and adventure sports.He has made Irish friends outside his church through playing basketball, football and rugby.

“I love hiking, swimming in the sea, cliff jumping out in Howth. I’ve been mountain biking, surfing in Bundoran, kayaking. Anything in the outdoors. I love the outdoors.” He plays basketball in Killester, Dublin, and has also played in an eastern European basketball league.

In his experience Irish people are very open to his religion and interested in learning more about his faith.

“I find that most of my friends have never met a Mormon before, so they are curious. People are normally very positive and supportive when they hear what I believe in and why I choose to uphold the values that mean so much to me.”

Before going to university in Utah, he spent two years as a missionary in England.

“The two years I spent serving a mission was one of the most rewarding and incredible experiences of my life. Helping others improve their lives as they developed and strengthened their faith is such an amazing thing to see, and, in turn, changed my life forever.”

He is proud of his faith and says it is uncommon for people to react negatively to his being a Mormon. However, he has experienced taunting and slagging from opposing teams when he refuses to play sport on a Sunday.

He spends a lot of his free time driving around Ireland, getting to know the countryside outside the capital.

“Things are smaller here. I feel like I can drive across the country and back in a day. I’m not a city boy, I’m a small-town boy, so to go days at a time without seeing trees or fields is difficult for me.”

After two years in Ireland, “the golden question” for him is whether to spend another year here or return to the US. He misses his siblings and would like to be around to see his 16 nieces and nephews as they grow up. He also recently met a young woman, another reason to consider moving back home.

“The girl – I can probably say she’s my girlfriend now – she was on a mission here but she’s finished now. She’s in Utah. Ideally I’d like to stay another year here and then see what happens after that.”

Restaurant meal kit review: A Spanish feast in the comfort of your own home
5