New to the Parish: From sanctions in Iran to a start-up in Ireland

A Tehran native who grew up in post-war Iran now employs 13 people at his Dublin tech firm. He sees many similarities between his compatriots and Irish people 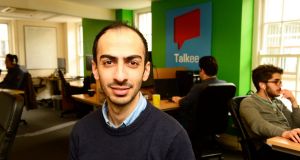 Parsa Ghaffari was born in the final months of the eight-year war between Iran and Iraq, in the late 1980s. He grew up in a country struggling in the aftermath of that conflict.

“During my early childhood there was definitely a period of stagnation in Iran because of the post-war circumstances, both from an economic perspective but also just from the general mood of the people. But at the same time there was hope we could build a better country.”

In his teen years, he noticed the economy beginning to grow again, as more services became available to the public and goods being imported from abroad. The growth in trade coincided with the nation’s oil prices going up, he says.

However, a few years before he left his home to begin working in China, Iranians began to feel the effects of the increasing sanctions and embargoes imposed by western nations.

“You could really feel the effects of the sanctions, and everyone’s assets literally fell to a third of their value over the course of a year. It was so widespread. It was no longer something only the government had to worry about; it included everyone on the streets.”

As the effects of the sanctions continued to spread throughout his home country, he focused on completing his university studies and began to apply for funding for tech start-ups. In 2010 he was offered a small amount of money, office space and a mentorship programme by Seán O’Sullivan, an engineer turned venture capitalist.

O’Sullivan’s SOSventures offered Ghaffari the chance to relocate to the city of Dalian in northeast China, where he could begin pursuing his dream of setting up a tech company. And so he packed his bags, moved halfway across the world and began to set up his company Aylien.

“The programme was very forward- thinking, very constructive for Ireland. It was two of us coming here, but now we’ve created 13 jobs and we will continue to create more jobs. We’re not taking anybody else’s jobs.

“What we all need to understand is that we live in a much more globalised and diverse world than before. That trend is just going to continue.”

He spent the first six months living in Cork city, before moving to Dublin. “I’d travelled to Europe before moving to Ireland, so there was no major culture shock for me. It was really just about enjoying the little things that I found in people and in different places, the cafes down in Cork and the nice accent.”

Cork felt very small after life in Iran and Dalian. “I felt Cork was too small for me, coming from Tehran. Dublin is a great city: very diverse and yet still genuine and homogeneous.”

He noticed many similarities between Iranian and Irish people. “There are lots of good traits that are shared between the Irish people and us: being down-to-earth and nice to other people and being kind and open and genuine.

“I don’t know what the root cause of that is. It might be that both countries have been through lots of hard times so they completely let go of the their ego and have a great sense of humour.”

When he first moved to Dublin, he threw himself into his work and made no effort to reach out to Ireland’s Iranian community. Eventually, a friend invited him to an event celebrating Shab-e Yalda, the Persian winter solstice.

“I went to the celebration and for the first time saw a group of about 70 Iranians in Dublin. I was completely shocked. Ireland is not a big destination for Iranians. I think altogether you could say there are 2,000-3,000 Iranians in Ireland, the majority of which I believe are students.”

He was curious to find out who had set up the celebration and asked to meet the organiser. He was introduced to Sheelan Yousefizadeh, whom he began dating soon after. Yousefizadeh moved to Ireland from Iran with her family in 2003; although she has not been back to her home country since, she is deeply interested in her Persian roots.

His tech company, Aylien, has gone from strength to strength. By the end of May, the group’s small office will house staff from Iran, Ireland, England, Germany, France, Brazil and the US.

Aylien uses artificial intelligence to extract information from large bodies of online text and break down the main topics into their simplest form. The tech start-up, which works with media and PR organisations, raised nearly €600,000 in its latest round of funding, which it will use to increase its staff to 20 people by the end of the year.

He hopes to expand the company to the US, but he plans to stay in Ireland for the foreseeable future. He visits his parents in Tehran a couple of times a year and says they love coming to Ireland. His sister, a doctor, lives in London.

“I definitely plan to stay, both from a personal point of view but also because of Aylien. Ireland provides a great ecosystem for start-ups to grow.

“We have lots of multinationals here in the IT sector. They’re hiring lots of people, and these people will eventually join start-ups, start their own start-ups, and they’re essentially seeding this ecosystem. It’s like the Silicon Valley effect. We can clearly see that happening in Ireland.

“From a technology-creation perspective, it’s great being based here. I like to think of Ireland as a quiet place where you can actually focus on your work without a lot of distractions.

Michael Harding: ‘Rage began to boil inside me, but I didn’t let it surface’
8

Protein powders: what are they and do they work?
Real news has value SUBSCRIBE