‘My mixed identity and brown skin pushed me into a dilemma. Where do I belong?’

New to the Parish: Jijo Sebastian arrived from India (via Dubai) in 2006 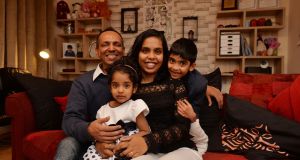 Working in a nursing home gives you a truly in-depth understanding of Irish culture and traditions, says Jijo Sebastian.

“A nursing home is a microcosm of Ireland. You get to know so many different kinds of people there. You get to know people’s lives, their stories, their histories, what life was like in Ireland in the 1940s, what they were doing during the second World War.”

Sebastian began working in a nursing home in Ashbourne the day after he moved to Ireland to join his wife. She had left Kerala in southern India six months previously, following the growing stream of young Indian nurses who made the long journey to Ireland in search of employment and better pay.

Sebastian’s wife Smitha had never left Kerala before and was very homesick during her first few months in Ireland. “She was living in an apartment by herself so it was loneliness. We moved into a house near a small Malayali [Keralan] community with about 25 families. It was more than just homesickness because we had been separated but I told her ‘I’m here now, everything is going to be okay’.

Sebastian had been living and working for nearly 10 years in the Middle East when he returned home aged 28 to find a bride through an arranged marriage. He signed up to a marriage agency and visited dozens of young women with his parents in the hopes of finding a suitable partner.

“I came on vacation to Kerala and I had to run around and see all these girls. I wish I had fallen in love with somebody before that but it never happened. Sometimes I feel I might have missed out on something but love marriages can just die out after two years. The thought of marrying someone for love, I never came close to that.”

Sebastian met Smitha, who was a 22-year-old nursing student at the time, four times before the couple agreed to get married. He was fascinated by the Myers-Briggs personality testing system and used the questionnaire to ascertain whether this young woman would make a good match. “I told her these are my qualities, this is how our relationship will be. We were very different but there were a lot of things that attracted me to her.”

While arranged marriages can be hard work, he says he made the right decision. “You do have problems but you adjust to them and somehow you come to terms with them. Now I’m happy.”

After the couple were married, Sebastian returned to his admin job in Dubai and began making arrangements for his wife to join him. However, she got in touch to say she was considering applying for a job in Ireland and would Sebastian be interested in moving there.

Sebastian says he was less interested in moving to the UK. “I wanted to visit the UK but never wanted to live there. I worked at an English firm in the Middle East and already knew what Irish and English and Americans were like. Americans and Irish are very similar in being friendly and open and make you feel like you are equal. But the English, I don’t know.”

Sebastian arrived in Ireland in April 2006 and began working in the kitchen of the nursing home where his wife had a job. He loved the work and quickly settled into his new life.

“It was wonderful. I was the first brown guy in the nursing home and they were really curious and so friendly. People went that extra length to make me feel comfortable.”

After two years at the nursing home, Sebastian moved onto an admin job in Ballymount Industrial Estate in Dublin. However, he missed the contact with people and moved back into kitchen work when the company closed down during the economic downturn. After his son Josh was born in 2010, he trained as a carer so that he could work part time.

“I couldn’t work full time anymore because childcare is very costly and I had to look for a job where the shifts were flexible. A carer in a nursing home was flexible hours and they’re really accommodating of family needs.”

While the couple thoroughly enjoy working with elderly people, it’s painful to watch their new Irish friends deteriorate as they grow older. “You see them degrading slowly, losing their memory and then they don’t recognise you. That’s very difficult.” The work also makes Sebastian reflect on his own mother. “She is all alone back in Kerala. I would look after her but we are here looking after lone mothers in Ireland.”

Growing up as Irish kids

Sebastian is proud to see his two children, six-year-old Josh and three-year-old Tia, growing up as Irish kids but says many members of the Keralan community are reluctant to let their children fully integrate into Irish society. Since moving to Ireland, Sebastian has begun making short films about the immigrant experience in Ireland and the desire of first-generation immigrants to pass on their culture to their children.

“Being well-integrated is good but not assimilated. I’m not for truly assimilating. You ought to keep some of your roots. But really, you should leave it up to your child, he has to decide what he wants to do.”

Sebastian feels safe in his Irish home and has rarely experienced overt racism but often worries his son will feel isolated because of his skin colour.

“People hesitate to ask me where I’m from because they see it as an insult. But I don’t have a problem with that because I’m a first-generation immigrant. I’m comfortable with answering I’m from India. But if you ask my son, he’ll be insulted.

“With the right-wing surge all over the world, I’m a concerned about my children. This mixed identity I have been trying to build and my brown skin have all pushed me into a perplexing dilemma. Where do I belong? Will my children be safe in the west?”