My first week off alcohol: out with the wine, in with the self-help books

My social experiment has provoked some strong reactions, and no shortage of recommended reading 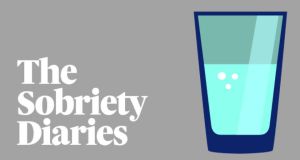 Last week in The Irish Times I began a minor social experiment. I swore off drink for a month. If all goes according to plan this will be the longest period of my adult life without alcohol.

The reaction to that article was strong. This demonstrates to me that wherever you’ve got a lot of people drinking you will also have a lot of people worried about their drinking.

People haven’t even been saying hello to me, they’ve just been shouting, “How could you do this to me?” or, “Gin and tonic!” (Except for Drinking Friend, who shouted, “Never have your photo taken from such a low angle again.” No wonder I love her the best.)

Other people have started telling me they haven’t had a drink in a year; or perhaps that they’ve been drinking two bottles of wine a day for a year.

The Soberistas website, mentioned in the article, reported a surge in new members last weekend, most of them Irish.

And there was a significant online response from Irish Times readers. I have read every one of those contributions, and we plan to print a selection of them next week.

A country of big drinkers has a lot to say about drinking. The old binary system, under which you are either an alcoholic or not, appears to be softening: it has to soften because drinkers and drinking are more complicated than that.

For me the week was marred not by being alcohol-free but by the death of a friend. Which puts being forced to drink mineral water into perspective.

On Friday I had a bit of an, er, intense time at work and was crushed when I remembered that I could not look forward to my first glass of wine of the weekend at 6pm. (It is often earlier.) I had to eat industrial quantities of Easter egg instead, two-fisted, to assuage the stress. Dignity, always dignity.

I went out as usual but drank a litre of mineral water. Nobody bothers putting a slice of lemon in a mineral water – it is a nondrink, so you get nonservice. Then home to watch Gogglebox.

Too hungover
On Saturday most of my drinking friends were too hungover to talk, but they selflessly sent texts. One took me to the off-licence to buy some nonalcoholic beer. So kind.

The nice nonalcoholic beer we wanted – Baltika – was not in stock, so we got a beer the woman in the off-licence identified as low in alcohol. Let’s call it Schleswig-Holstein.

Within an hour a nondrinking friend had read the label on Schleswig-Holstein, found that it was 4.6 per cent (more than Heineken or Bulmers cider) and banished it to the back shed. This made me think of Harry Enfield’s 1950s sketch: “Women know your limits!” Drink sellers, know your low alcohol beers, please!

On Sunday I went to a lunch party and drank coconut water. You can only take two glasses of it.

No change
I think I might become a bit uninhibited by not drinking. I seem to be standing very close to people and shouting. (No change there, then.)

I got a bit tired and cranky on Tuesday and Wednesday, so no change there, then, either, both drinking and nondrinking friends agree.

I didn’t ask for any books, but somehow this week I have ended up with well-worn copies of A Bottle in the Cupboard (although where else are you meant to keep bottles, when you think about it? We can’t all have drink trolleys in the hall) and Codependent No More. Happy days.

In the bookshops I was surprised by how small the selection of books on alcohol was – in this, of all countries. People must be buying them online. At Eason the sales assistant said that Allen Carr’s Easy Way to Control Alcohol and Allen Carr’s No More Hangovers were the most popular sellers. Can you imagine buying the latter with a screaming hangover? They should put it on a higher shelf, so alcohol casualties would not have to bend down.

I bought Kick the Drink . . . Easily! by Jason Vale, in its cover of chick-lit pink. Lucy Rocca, founder of the Soberistas website, told me she had read it obsessively in her first few weeks without alcohol, and “it saved my life”.

Vale seems to have left no stone of self-help unturned. He is the bestselling author of 7lbs in 7 Days Super Juice Diet; the blurb says: “He is a leading authority on addiction, health and, most importantly, juicing.”

He is a very close disciple – not to put it more strongly than that – of the late Allen Carr, with whom he seems to have once worked. Anyone who has read Carr’s Easy Way to Stop Smoking more than a dozen times – and what smoker hasn’t? – will recognise the idea that “there is nothing to give up”.

Vale’s main argument, as I understand it, is that there is no such thing as an alcoholic. Alcohol is a drug, and everyone who uses it is, to a greater or lesser extent, addicted to it.

So he casts the net of addiction both more widely and more shallowly than other toilers in the rehab vineyard.

I also bought Drink: The Intimate Relationship Between Women and Alcohol, by Ann Dowsett Johnston. And I am ordering Lawrence Osborne’s The Wet and the Dry: A Drinker’s Journey, which has been recommended to me.

There is a real danger now that I could read myself to death.