Most homoerotic experience in rural Ireland? 15 men naked in a GAA dressing room

How to be a Man is a series exploring masculinity and the challenges facing men in Ireland today. If you would like to add your voice to this series, email howtobeaman@irishtimes.com

What did being a man look like to you growing up?

I grew up with two sisters, four brothers, my mother, my father and my grandfather. We all lived in the same house and all our aunties and uncles were local. So there were a lot of men around. We came from a farming background. All my uncles were turf cutters or mechanics or in construction, some sort of manual labour. So manliness for me was 90per cent of the time about manual labour – mucky hands, walking around in your socks, working hard. Traditionally the man did the stuff outside. The work in the home was all done by women... People had a place. A certain gender did a certain type of job.

What did you feel about that at the time?

Sometimes we’d say ‘How come my sister gets to stay at home from the bog and we have to go out?’ But we didn’t want to do the inside jobs – washing the dishes or tidying the mess the lads have made, it was more about dodging work.

Why was the GAA so important to you?

Football was a great outlet. It was controlled aggression… Some of the best guys you’d know off the field you’d have the mightiest of battles with on the field. It’s a place where you can go and do that safely. You’d pride yourself on being physical.

Girls and boys played together up to a certain age – you’d be marking a girl – and sometimes a girl would teach you a lesson on the field. You’d underestimate her. The next thing she’d wallop you and you’d know she meant business, that she could hold her own.

How 20 men will behave in a room with no females changes completely with just one female in the room. I guess the term “boys will be boys” is a justification for bad behaviour. It becomes a place where you can make those inappropriate jokes you can’t make in normal society and that breeds a mentality where you start thinking a certain way. 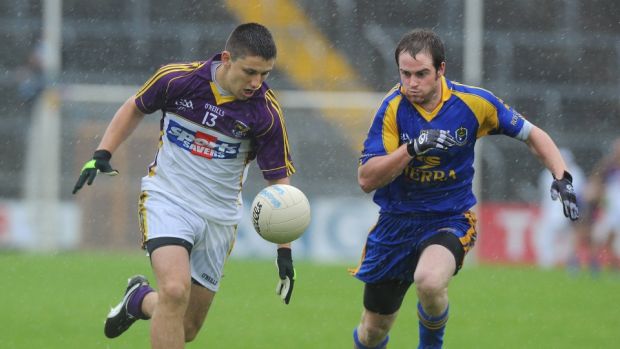 Were you ever in a fight?

There was a stage in adolescence where maybe there was nothing else to do, but sometimes you were almost looking for a fight. And there are men who don’t grow out of that… It’s so ridiculous when you think about it. We can justify it by saying we have more testosterone but I’m not sure that’s the reason… sometimes I think that the physicalness of it all might be linked to men not being good at speaking about feelings.

Are you more inclined to talk about your feelings than when you were younger?

Definitely. But I still struggle with it. I guess it’s because you just leave yourself so open. You’re never more exposed than when you give your true feelings on something. I’m not sure where it comes from, but there’s almost a stereotype that the man must be strong. Maybe it comes from films where the female is crying and the man is there for her to put her shoulder on. When there’s a problem a woman will say how they feel whereas a man just looks for the solution. ‘It doesn’t matter how I feel. I have to fix it.’ That’s bollocks.

It was in November and it was the first time I cried since I’d say I was a teenager. I had just left a teaching job, my girlfriend was helping me out massively and I felt like I couldn’t do anything right. It was something small, like I hadn’t taken the bin out or something and I went into the shower and I just broke down crying and couldn’t stop. And I felt great. I didn’t want to stop. I haven’t cried since… Though I find myself closer to allowing myself to do it.

What have you learned from women?

Did you ever see a girl start crying and three or four females descend and just hug and there’s no discussion no nothing, just ‘it’s okay’, some body contact, a bit of a hug and a ‘thank you’? There might be no explanation, just support. That isn’t there among men. It’s something that I’m trying to bring myself a bit closer to.

What did you learn from performing in Riot?

Hanging around backstage at Riot all these issues were brought up around feminism and things I was oblivious to. I learned a lot from Rory [O’Neill, aka Panti Bliss]… And it’s funny because I’m new to that world and new to the gay community and sometimes you say something out of ignorance. If I say something and I’m wrong, I want to know.

Did performing in Riot affect your sense of masculinity?

I do a GAA striptease [as part of the show]. I’m in my Roscommon kit and I have a bag of Tayto with me and it’s just a pisstake – a macho character who starts to strip off. And then I’m down to this pink thong and Panti comes on and blows a whistle. It’s funny.

Afterwards people feel like they own a bit of you. You get inappropriate comments. It’s the first time I felt objectified. I’m standing there listening to these lines... I’m fairly physical, but if I was a female dealing with some guy bigger than me, how intimidating would it be? You’d feel cornered. And I’m thinking Jesus, this is the shit that females have to put up with! It definitely opened my eyes.

What would your GAA teammates make of Riot?

Some have got in contact and congratulated me. I don’t know if any of them have seen it.

What do you think they would make of it?

I don’t know. And the great and the liberating thing is, I don’t care. I’m comfortable with my sexuality.

It feels like a big jump from the GAA to Riot…

It is, in fairness. Though 15 guys naked in a shower together in a GAA dressing room – that’s probably the closest to a homoerotic experience you’re going to get in rural Ireland.

How is your life different from the lives your older relatives?

It’s so different. Back in my dad’s generation you met a girl, got married and had as many kids as you could. To me that’s crazy. I’m 28 now. My father had seven kids by the time he was 28.

What positive masculine trait did you learn from your dad and uncles?

One positive, I guess, is the ability to emotionally disconnect in stressful scenarios… Being able to do that can get you through something. But oftentimes you then just move on, whereas if you can get through it and come back and address what just happened, that might be better.

In performance it helps. If you’re playing a sad part every day for six months it helps to be able to convey something without actually feeling it. That’s important for your own mental health [when performing] to be able to show something but not feel it inside. Whereas I guess what we traditionally do is to feel something inside and outside not show it.

What makes someone a good man?

As I’ve gone on a journey of bettering myself, it’s been more about making myself a better person. I’ve never really thought about masculinity, I just thought, how can I be better?

Smell of success: 100 years of Chanel No5

Georgian proportions and modern finesse on an acre by the Shannon estuary for €445,000

Lives Lost to Covid-19: Sean Farrelly was a baker known for warm and generous nature

Bray native’s life revolved around his close and extended family