Rereading interviews he gave in the past, the broadcaster reflects on his family, his career and his criticism of RTÉ’s ‘elitist’ coverage of the arts 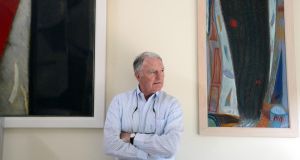 On the day, with luck in the distant future, that Mike Murphy dies, RTÉ will probably broadcast, yet again, the fabulously funny clip of him provoking Gay Byrne to say the F-word in the grounds of Trinity College in 1982. But if that is all the public remembers Murphy for, it would do the broadcaster a great disservice. He is a multidimensional man who has too often been dogged by a one-dimensional media image.

I last interviewed Murphy in 2000, after he announced his impending retirement from broadcasting. Murphy was leaving his RTÉ Radio 1 programme, The Arts Show , which he had presented since 1988 and which The Irish Times had said was probably the most important single outlet for the arts in Ireland. During that interview in 2000, Murphy made some merciless comments about arts coverage in Ireland.

What he said about the arts in 2000
“I like Glenn [Patterson] as a writer but the show [ The Black Box , RTÉ] was pretentious, supercilious and all-knowing. This was painfully obvious when I heard him and his guests discuss

“It was the kind of language that perpetrates the notion that the arts still belong to an elite group of people, and not to the public in general.”

Murphy was similarly scathing about Later With John Kelly . “It had a static look. There was a danger of an in-crowd being used over and over, and that, in itself, is elitist. And it rarely went outside the Pale for its subjects or guests.”

The problems existed beyond RTÉ, Murphy believed, and were also evident in The Irish Times .

“At the time I started The Arts Show there were people who really did feel they owned the arts, had a special insight, and would disseminate this information for the great unwashed. As in, people who didn’t really need to know about the arts but needed to know what ‘I’, the critic and mediator, think.

“So I said, ‘I don’t want people to think I’m the clever dick who is going to tell them my interpretation of the arts.’ I’d like to know about the arts myself, and to get people who can communicate enthusiastically to talk about the arts.”

What he said about


Last year, Murphy again spoke about arts coverage, criticising RTÉ’s decision to broadcast Masterpiece: Ireland’s Favourite Painting , which he presented, at 10.15pm. In a letter to The Irish Times , Murphy claimed that this decision was a product of the “Cromwellian edict of arts programming being banished to the Connacht of broadcasting, ie, at, or past, most people’s bedtime.”


What he says about

the arts now
“I stand over what I said,” Murphy

says. “They do not treat the arts as they should. Many individuals [in RTÉ] have said, ‘You were dead right.’ But there is a troglodytic influence somewhere in the scheduling area of RTÉ, and I resent the fact that the arts are relegated to where they are. I also stand over my criticism of arts shows where presenters are lugubrious, and languish in their own elitism, which is a turnoff for general audiences.”

Murphy also recalls that when The Arts Show moved from 7pm to an afternoon slot on Radio 1, it “greatly increased its audience”. Then he adds, light-heartedly, “And The Arts Show would be a damn sight better than Mooney .”

Murphy then says he’d like to do a “series on 20th-century art in Ireland”. But during his tenure hosting The Arts Show , certain commentators described him as “a marshmallow” – lightweight – and might still believe that he is.

“I remember Paddy Woodworth, [a former] arts editor of The Irish Times , in fact, being really patronising. And Colm Tóibín and John Boland had a go at me. But I understood why some were saying, ‘He is a lightweight coming in to deal with the arts.’

“Yet I believed that people were more interested in the arts than they themselves knew. They listened to music, went to movies, read popular fiction. Those are the arts. Whereas, before that, the arts were antiques and classical music, and you had exclusivity; people who wanted to impress other people by indulging in these areas. I wanted to bring the whole lot together: the popular arts and high art.”

All of which has come to pass in terms of arts coverage, “even in The Irish Times ”, Murphy says. While stressing that he is a “man without ego, in this sense”, he suggests that The Arts Show “played a small but considerable part in this change.”


What he said about

Me , Murphy wrote at one point of a particularly violent row with his father. The incident was widely reported in the media when the book was published. During our interview in 2000 we spoke of Murphy’s “pent-up emotions” as a teenager, of “familial shadows” and of his father’s “oppressive silence”.

Speaking then, he said, “My father, God rest him, and my mother did not have a happy marriage. And my father was one of those silent types – as my mother used to say, street angel, house devil. It was very distressing for me. I was the eldest, sensitive, spirited . . . But the unfortunate thing about my father is that I never got to know him. I never, ever, ever, ever had a conversation with him.”


What he says about

family life now
Today, he is pensive as he listens to those quotes

. “I often think about my late father and mother and wish I had more time with both, particularly my father, and that we’d had proper conversations. But at the time men weren’t able to communicate their feelings; they just went out to work. That was their role. But he must have felt it terribly, the gap between himself and myself. But I turned against him early on. I took my mother’s side.”

One reason for that is that she treated Mike “as a surrogate husband”. As the eldest son, he was the one she would talk to. This left him with a “strange range of feelings” about his mother.

However, Murphy now rejects one claim he made in his memoir, and later repeated on The Late Late Show . “I said if there is a hereafter I wouldn’t want to meet either of them. That is not how I feel now. But when I wrote that book, I was going through a marriage break-up, difficult times. I’d hate people feeling that my father was not a nice man. The poor man didn’t deserve that. Had I exercised proper judgment I wouldn’t have written the book at that time.”

Murphy also admits that he made a mistake writing the memoir “purely for the money”. He did it partly because, believing he was responsible for the break-up of his first marriage, to Eileen Murphy, he gave her much of what he owned and had to start again. “I was [responsible]. I fell in love with another woman,” he says, referring to his current wife, Ann Walsh.

Falling in love with Walsh had not been the only cause of the break-up of Murphy’s first marriage. In 2000 he also said they “married very young” and “grew apart”. He also admitted that the Cheery Mike persona he often projected at home, suppressing his “I’m down, hurt, let’s talk about it” self, was a damaging silence not unlike the silence he knew as a child.

“I still think that is true,” he says. “I was trying too hard not to replicate the shadows I’d known at home. I also became a workaholic; another mistake. I didn’t give my children the time or advice I should have, apart from not confiding in them. I regret all that. At night, when I lie in bed looking back on my life, that’s the kind of thing that troubles my conscience.”

Murphy says he probably was “a callow youth who didn’t know how to be a husband, father, or a fully rounded person” until his middle years.


What he says about himself today

Overall, Murphy is “very happy”. But he hopes he isn’t remembered merely as “the guy who got Gay to say ‘f*** off” on TV”.

“Actually, Gay says he hopes that’s not what I am remembered for. And I myself wouldn’t like it. I’m not that pushed about what legacy I leave, but I wouldn’t like it to be, ‘He was a character, wasn’t he?’ and for Candid Camera . There was far more to my career, and to my life.”

Coronavirus: What day of the week is it again?
10