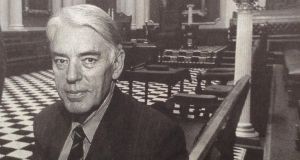 Michael Walker in the Grand Masonic Lodge of Ireland on Molesworth Street in Dublin.

In the parlance of freemasonry, Michael Walker, who has died aged 83, “served” no fewer than five grand masters of the order in Ireland as the grand secretary of the Grand Masonic Lodge of Ireland on Molesworth Street in Dublin.

However, as the present grand secretary, Philip Daley, put it to The Irish Times last week, Walker “was effectively grand master” during his tenure from 1981 until his retirement in 2005, given that during that period, although not in recent years, the position of grand master had been one “of figureheads”.

Walker’s period in office was a time of challenge for freemasonry in this country. Walker inherited in 1981 the most important administrative office of an organisation which, 40 years ago, was still a relatively controversial and overwhelmingly Protestant organisation in an overwhelmingly Catholic Ireland, and to boot found himself as a southern Irish Protestant running an all-Ireland order at the height of the Troubles in Northern Ireland.

It took its toll: at his funeral service last month in Killiney, Co Dublin, his daughter Sally, in a heartfelt eulogy for her father, told the congregation that “his administrative talents were severely challenged as things outside his control tested them to the limit”.

But Walker persevered with an impressive diligence, gradually helping literally to open the doors of Irish freemasonry to a perhaps initially suspicious public, giving interviews to the press, and being undoubtedly instrumental in starting the by-now weekly tours of the grand lodge building, which has become one of the city’s most-visited tourist attractions; and also in the opening of the grand lodge’s main chamber for regular concerts and other cultural events. All of this is a level of access for the general public which would have been unthinkable in, say, the middle decades of the last century.

Walker’s role as grand secretary also involved a great deal of international travel. Daley said: “It would be fair to say that the grand lodges of Ireland, England and Scotland are pre-eminent globally; the rest of [conventional] freemasonry would look to one or other of these lodges for advice on freemasonry . . . he [Walker] would not have sought to advise them, but they would seek out his advice.”

Important in this matter is the fact that, as Daley added, the Irish grand lodge has 14 overseas “provinces” including the grand lodges of Jamaica, Bermuda, the Bahamas, Sri Lanka and India, and is the grand lodge also of one Australian lodge and several in Africa and East Asia.

Walker rose, in time, to the highest levels of freemasonry, becoming a knight commander of the grand council of knight masons, a prince mason and the grand general secretary of the supreme council, 33 degrees, of the ancient and accepted rite for Ireland. The significance of these three levels of freemasonry is that one has to be invited to membership of them, and canvassing for, or requesting, membership results in automatic disqualification. Thus, among the most experienced of his fellow freemasons he was highly esteemed.

In his capacity as grand secretary, Walker was also responsible for overseeing the administration of the many charities which the order either runs directly, such as the benefit funds for girls and boys, and the Victorian jubilee masonic fund, the latter mainly to assist the widows and orphans of freemasons; and Masonic charities, such as the Freemasons of Ireland Medical Research Fund, which has made significant financial contributions in this area, including in recent years for research in, for example, UCD’s medical school and other centres with perhaps, at least in the past, a more Catholic ethos or background.

Walker was also a reflective thinker and writer on society in general. In his pamphlet Freemasonry in Society Today and Tomorrow (1999), he presciently foresaw, years before the advent of social media, that the pressures of rapid change in contemporary society would undermine “our natural needs for security, control, certainty and predictability”. He trenchantly condemned “excessive individualism,” as he saw it, which [has led] ”to a false sense of freedom,” leading in turn to the idea that “one was free to insist on one’s own rights, irrespective of the rights of others”.

It was surely significant, in this regard, that in the pamphlet Walker quotes, with approval, criticisms of modern society made by two then-serving Catholic bishops, Dr Donal Murray, Auxiliary Bishop of Dublin, and Dr William Lee of Waterford, adding that “today’s society [is] obsessed . . . with material success for the individual rather than his contribution to society”.

Michael Walker came from a colourful background. His father, William, was an independently wealthy dabbler in the stock market who did some farming, firstly in Guernsey, where Walker was born in 1936, and then at Dunganstown, Co Wicklow, from 1937. His mother, Rose Mary, née Taylor, was the daughter of George Taylor, president of the RCSI and surgeon by appointment to the last lord lieutenant of a unitary Ireland; she grew up in the family’s town house on Merrion Square.

Educated, successively, at Aravon School, Bray, St Columba’s College, Rathfarnham and, perhaps surprisingly, given his background, also at the De La Salle Brothers’ school in Wicklow town, where he spent a year before sitting his Leaving Certificate. Walker took a degree in agricultural science at the University of Leeds, and the higher diploma in education at University College, Cork. He taught thereafter at Bandon Grammar School. In 1967, he became an agronomist with Goulding Fertilisers in Dublin, where he was, jointly with Spencer Hudson, awarded the Farmscan award for farm management in 1975. He worked as an independent agricultural consultant for three years from 1978.

Michael Walker is survived by his widow, Maurethe (née Varley), his children Sally and Andrew, and his brothers Patrick, Neil and Colin.

‘I couldn’t get a job in Ireland. Was it because I’m a different race?’
4

Róisín Ingle: Have you snapped yet? I did the other day. Five times
10

Pasta pesto: Take yours up a notch with this recipe
Real news has value SUBSCRIBE