Obituary: She accepted the crucial role of forming not one, but two chamber orchestras, which were the highlights of Irish music-making from 1970 onwards 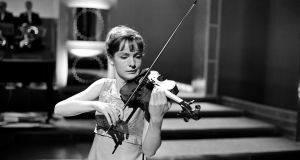 Mary Gallagher, who has died at the age of 76, was the outstanding Irish violinist of her generation. Exceptionally talented as a youngster, she won international acclaim in several arenas as a soloist, but it was as an orchestral leader that she excelled.

Born in Dublin in 1940 to Agnes and barrister Edward Gallagher, Mary had family connections with both Donegal and Mayo. She attended Scoil Caitriona in Eccles Street, before starting violin studies at the Royal Irish Academy of Music with Jaroslav Vanecek. So crucial was this study that it informed her entire professional career.

When Vanecek moved from the RIAM to the (then) College of Music, she followed him and became his teaching assistant. Charles Acton, in this newspaper, described the playing imbued by Vanecek’s teaching as “a very sure, brilliant tone, beautiful intonation and lively crispness of playing”. Those words encapsulated the quality of Gallagher’s playing style. Acton subsequently wrote of her graceful playing and her “real authority, mastery and assurance, and impeccable technique”.

Gallagher subsequently studied with Yehudi Menuhin’s protégé, Alberto Lysy, in Rome and Gstaad, and was later invited to take up a fellowship at the Tanglewood Institute in Boston, where she was awarded the Albert Spalding Prize for the most outstanding musician of the year. It was at this point that composer Brian Boydell predicted a brilliant future for her, remarking that her comparative youth in no way obstructed her musical maturity.

Her innate modesty and reticence concealed her huge talent: she never put herself forward to the heights she might have achieved as a soloist, although her performances of the Khatchaturian and second Prokofiev concertos with the RTÉ Symphony Orchestra were acclaimed. Instead, she accepted the crucial role of forming not one, but two chamber orchestras, which were the highlights of Irish music-making from 1970 onwards.

Already, in 1960, at the age of 20, Gallagher had been under consideration as a potential future leader of the Radio Éireann (today, National) Symphony Orchestra. In 1970, she became inaugural leader of the New Irish Chamber Orchestra. With Gallagher as leader and André Prieur as conductor, the work of NICO over the next 10 years galvanised the Irish music world, attracting soloists of the calibre of James Galway, Jean-Pierre Rampal, Paul Tortelier, Peter Pears and Fou T’song.

Apart from superb playing skills, orchestral leadership demands firmness, charm, tenacity and wisdom. Mary Gallagher embodied all these behind an innocent profile that belied her determination.

The essence of NICO’s string playing was the unitary nature of the “Vanecek sound” as it was called, with Gallagher leading players such as Margaret Hayes, Clodagh McSwiney, Ruth O’Donovan and Sunniva Fitzpatrick.

The “Vanecek sound” achieved a middle-European sweetness and vibrancy of tone which was matched by wind playing from Helmut Seeber, Gilbert Berg, Victor Malirsh and Mary’s husband, Brian O’Rourke, then principal clarinet (later general manager) with the RTÉ Symphony.

For Gallagher as soloist, the high point of her career coincided with her leadership of NICO, when she (and they) played Vivaldi’s four concertos “The Seasons” for Dimitri Shostakovich during his visit to Dublin in 1972.

Gallagher left NICO in 1980, to concentrate on her teaching, at the College of Music and privately. Her particular skill was to discover and nurture hidden talent. Her former students include such distinguished players as Dara de Cogan. Many former pupils now occupy key positions in British orchestras.

Gallagher returned to orchestral work in 1995 as leader of the newly-formed Orchestra of St Cecilia, a chamber group whose principal distinction was to perform all 200 of the Bach cantatas, as well as the Mozart piano concertos and the Beethoven symphonies and concertos, with conductors such as Sir Neville Marriner and soloists Hugh Tinney and Barry Douglas. She retired in 2004.

She is survived by her husband, Brian, and her sons Killian, John and Donncha.