Man from the Bronx who put hurling on Irish screens 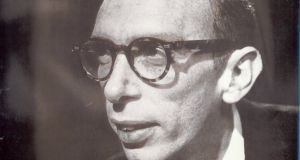 Burt Budin: the New Yorker of Russian stock was a producer-director who helped set up Telefís Éireann

Burton Budin, universally known as Burt, who has died aged 86, was a producer-director who helped set up Ireland’s national TV channel.

Telefís Éireann flickered into life on the nation’s screens on New Year’s Eve 1961 with grainy images of snow falling in O’Connell Street as crowds gathered to watch VIP guests arrived for the opening party in the Gresham hotel.

To get those pictures on screen that night, and every day which followed, an eclectic group of TV professionals had been assembled under director-general Ed Roth and programme controller Michael Barry.

From America came Burt Budin, a New Yorker of Russian stock, born in the Bronx, who had spent most of his childhood in Manhattan.

As a child, he would hang around outside Brill Building, the celebrated songwriting factory just north of Times Square, where later talents like Gerry Goffin and Carole King, Burt Bacharach and Neil Sedaka would huddle in cubbyholes, writing hit songs to order. The star-struck boy begged used radio scripts from people leaving the building. He needed to know how it was done; he would be doing it soon himself.

And so he was. He became a TV director working on affiliated local stations in New York state, Illinois and Little Rock, Arkansas. At station WNBF in Binghampton he met Frances Mayville. He was directing a cookery programme she was presenting. Shortly after their marriage in Vermont in 1961 they moved to Dublin.

There he found himself working alongside like Chloe Gibson, the Devon-born director who had “discovered” Dirk Bogarde in 1947, Peter Collinson, another English director, and Micheál Johnson, who had worked for the BBC and who became a lifelong friend.

Budin directed coverage of the first televised All-Ireland hurling final in 1962, when critics who had said TV cameras would be too slow to capture the lightning-fast exchanges on the pitch were confounded.

The following year he worked on the John F Kennedy visit. In later life Budin said he was proud of having directed Terry Wogan’s first screen appearance, and of working with Gay Byrne.

In retirement in Yorkshire golf was his passion and Moortown golf club his second home. He loved the game, his family said, almost as much as he loved chocolate.

Burt Budin is survived by his widow, Frances, and two daughters.

An Irishwoman in Milan: ‘Everything that usually seems important suddenly isn’t’
5

Looking for a new frock? Here's why you should rent, not buy
6