Madonna ‘endorses’ Singing Nun on release of ‘Like a Virgin’ cover 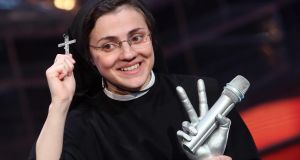 Italian sister Cristina Scuccia holding her prize after winning the The Voice of Italy in Milan in June. Photograph: Matteo Bazzi/EPA

As endorsements for your first album go, they do not get much heavier than this.

When Italy’s Singing Nun, 26-year-old Ursuline sister Cristina Scuccia, opted to promote her first album, due for release next month, she had the smart idea of releasing as a single her version of Madonna’s 1984 hit Like A Virgin.

To the which Madonna responded this week by posting an Instagram photo of herself and the Catholic nun titled ‘Sisters For Life”.

There is, of course, a world of difference between the nature of the interpretations offered by the two women of the original Madonna song.

When the US pop idol sings of being “like a virgin touched for the very first time”, she would seem to be clearly referring to physical, sexual love.

When Sr Cristina sings the same lines, her thoughts are much more of the spiritual variety, with her thoughts focused on Jesus.

Speaking to the Catholic daily L’Avvenire” this week, she explained that it had been her idea to use Like a Virgin as the cover song, adding “but without any intention of being provocative or scandalous”.

Sr Cristina says that when you read the Madonna lyrics, you discover a song “about love’s ability to renew a person and rescue them from their past”.

To that end, she has altered the beat from its original pop rhythm into a romantic ballad, saying that it is now “closer to a layperson’s prayer than a pop song”.

Sister Cristina won the right to record an album after she won the Italian TV Song Contest The Voice Of Italy last June.

On that occasion, her success proved to be an overnight sensation but she insisted that it would not change her life, saying:

“I will never give up on the biggest love of my life just to record a song. I won’t waste the greatest gift in my life, I will continue to sing in the streets, in Church, in the parish hall, wherever the good Lord calls me...and I will remain in the arms of Jesus.”

This week, she repeated the message, telling L’Avvenire: “I know I have a big responsibility. I should be bearing witness. And I am happy to do so. I am really excited about having found Jesus and I would like everyone to find him.”

It remains to be seen just what Madonna’s ‘Sisters For Life’ picture really means. Total irony or total embrace? Is Madonna really happy that her song has been turned into a sort of canticle sung by a bespectacled nun in full black habit and broad, flat shoes.

There is a curious, doubtless totally intended irony about the fact that both the 1984 single and this new one used magical Venice as the location for the promotional video. However, whilst Madonna did a lot of gyrating and “other” things in her video, Sr Cristina just belts it out with her distinctly impressive voice, against a black and white background.

Sr Cristina, who did not earn anything from her victory on The Voice Of Italy, says that she will not get rich even if the new album sells a million copies.

“I have taken a vow of poverty and we will use any revenue to help the projects of our (Ursuline) religious community.”

Not everyone is happy about Sister Cristina’s new career. SIR, the news agency run by the Italian Bishops, this week pointed to the intervention of Madonna saying that Sister Cristina needs to be “careful” since her choice of cover song can easily be “manipulated”.

As of now, Pope Francis has made no comment on her musical career.

For much of this pontificate, the Pope has called on priests and nuns to “go out” to the faithful, not to remain closed away in their churches or convents.

Sr Cristina argues that that is exactly what she is doing, saying that Pope Francis is “the best answer I can give to anyone who thinks that I shouldn’t be singing on television”.