Looking forward to 2014, from a thousand years ago

We’ve a lot of anniversaries on our plate these days, but the Vikings should be allowed raid the calendar 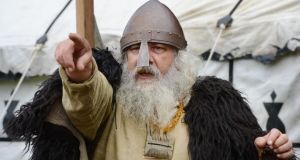 On April 23rd, 1014, the Battle of Clontarf was fought. About 5,000 warriors were in the field that day, with enormous casualties. My favourite line on this is from David W McCullough’s Wars of the Irish Kings, in which it is described as “one of the largest battles yet fought in Ireland”. The use of the word “yet” seems somewhat ominous.

Anyway, the Battle of Clontarf is obviously best known for Brian Boru, victorious then stabbed to death – although probably not while praying, as this detail was likely added to make him seem more pious.

Actually, much about the legends of Boru’s life, and death, is down to some extremely successful propaganda spread by the rollicking and largely untrue Cogadh Gaedhel re Gallaibh (War of the Irish With the Foreigners), which was commissioned a century later by his descendants. The success of the myth is among the reasons why we should really be giving it more attention next year.

Boru and the Battle of Clontarf – what we know and what we think we know – deserve to push their way through a current run of historical anniversaries that are focused almost entirely on a century ago and the founding years of the State.

But the foundations of the nation go far deeper than that, many of them laid down by the generations of Vikings who so radically altered Ireland, its trade, its cities, its towns, its population, its language, its surnames. (If you’re a Doyle, Higgins or McManus, congratulations: you should get a free ticket for the Viking Splash tour.)

That the battle took place in Dublin shouldn’t prevent it from being of national importance. Neither should the subsequent untruths be a deterrent, because they can teach us much about propaganda and myth. It is a lesson in how much changes but also in how much stays the same. (Walk the streets of central Dublin and you are tracing those carved by the Vikings along the then much wider banks of the Liffey.)

Horned helmets
And it is also a lesson in how many of our certainties are fiction. I’ve mentioned here before that they never wore horned helmets. I don’t need to bore you again on that. (But they didn’t. Never. Not once.)

It is a lesson in trade and migration, and the ongoing detective work that involves studying their impact. Everyone knows about the scope of the slave trade, for instance, but as Dublin grew into a capital of the Viking empire, why was there such an important market for moss? Because no one had invented toilet paper yet.

And we have an idea that they dragged Irish north with them, but in recent years we’ve learned that half of Icelandic women have Gaelic ancestry.

What’s more, the story of the Vikings had a crucial epilogue: the Normans. They were originally Norse who had pillaged their way down and up Europe until settling in northern France, from where they evolved into invaders of such consequence that their arrival in Ireland still has ongoing consequences, 850 years on.

But, most of all, it’s ridiculously exciting stuff. There’s a reason why Game of Thrones – and countless other fantasy epics – are so deeply rooted in Norse mythology. Its scope, its rivalries, its hair, its nicknames. (Ragnar “Hairy Trousers”. Sigurd “Snake Eye”. Ivar the Boneless. Or Sitric Silkenbeard, the king of Dublin defeated by Boru 1,000 years ago.)

In 1988 Dublin celebrated the most spurious of anniversaries. The city’s millennium was a concocted affair, a good 150 years off the true millennium of the city’s founding, but brazen all the same. Dublin’s Great in ’88, they said, which was an act of self-affirmation as much as a marketing slogan. It was a wheeze, somewhat akin to a Gathering of its day.

Still, it was a splash of light in a drab period, still visible in the logo in brickwork on the Stephen’s Green Shopping Centre, or the trophy awarded to the winner of the annual rugby international against England. (It has horns. Don’t start me.)

That was more than 25 years ago – a lifetime in many cases. The success of the Viking Splash tours shows the appetite for the stories. The crowds that lined the Liffey to welcome the rebuilt Viking longship in 2007 was about a population stepping into a flowing river of history.

Next year’s anniversary of the Battle of Clontarf is an excuse to reconnect on a greater scale. The Vikings are our past. They are our present. And they are enormously good fun.