Last of the ‘exotic’ Hollywood heart-throbs 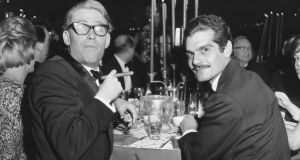 Omar Sharif with Peter O’Toole at a Hollywood party following the premiere of Lawrence of Arabia in 1962. Photograph: AP

Omar Sharif, who has died aged 83, was introduced to the international screen in one of the most dramatic entrances of film history.

This was the scene in David Lean’s Lawrence of Arabia (1962) in which Lawrence (Peter O’Toole) first makes contact with the Arab chieftain Sherif Ali (Sharif). In a daringly protracted sequence, Ali develops from a speck on the horizon into a towering, huge horseman, rifle at the ready.

Sharif was instantly elevated by this debut into a major box-office figure, and went on to star in a succession of big-budget films during the 1960s, most notably the contrasting blockbuster hits Doctor Zhivago (1965) and Funny Girl (1968), as perhaps the last of the “exotic” Hollywood heartthrobs in a line of descent from Rudolph Valentino.

This situation, however, proved comparatively short-lived. Almost like the protagonist of a Victorian novel, Sharif was overtaken by his own success, to the extent that in order to service the debts incurred by gambling and a playboy lifestyle, he was thrown back on accepting any work that came his way and entered a downward spiral into trivial and meretricious movies.

He was born Michel Chalhoub in Alexandria, the son of well-to-do Lebanese-Syrian Christians, Claire (née Saada) and Joseph Chalhoub, and educated at a private school and at Cairo University.

He worked briefly in his father’s lumber business but fell for the lure of acting, and was delighted when a friend, the director Youssef Chahine, offered him a role in the film Struggle in the Valley (1954).

Sharif became well established in Egyptian cinema and also starred in the French-backed Goha (1958), which afforded him some international recognition, if only in the arthouses.

“Maybe if I hadn’t made Lawrence, I would have gone on living in Cairo and had five children and lots of grandchildren,” he said, blaming the failure of his marriage on his constant absences abroad.

The role of Sherif Ali was pivotal in Lawrence’s dramatic scheme, and Sharif’s swarthy, romantic aura was played off to great effect against the blue-eyed blondness of O’Toole’s Lawrence. The two became close friends on the set. Sharif’s performance won him Golden Globe awards as best supporting actor and most promising newcomer.

Fluent in English and French, Sharif worked steadily for the next few years, largely as an all-purpose “foreigner”. But it was as the Russian hero of Lean’s Doctor Zhivago that he achieved his best-remembered screen role, a brooding, magnetic presence.

There was no doubt about his box-office stature and it was revealing that the film of the musical Funny Girl, which in the theatre had been an unabashed vehicle for Barbra Streisand, was marketed on the basis of her co-starring with Sharif.

A number of unmemorable films followed in the 1970s but Sharif was at this time beginning to be more readily associated with the game of bridge than with acting. Though he took it up only in adult life, he developed into a world-class player. In addition to competing in international tournaments he wrote a syndicated column on the subject for several years for the Chicago Tribune, was the author of several books on bridge, and licensed his name to a bridge computer game.

Professionally, he drifted from one minor role to the next, telling a journalist in 2003 that “for 25 years I have been making rubbish movies”. But at least he had returned to the realms of serious acting by taking the leading role in the 2003 French movie Monsieur Ibrahim, which secured him a best actor César award. He is survived by his son and two grandsons.