From the scattered remnants, Ireland’s oldest oak trees are being revived as part of a global initiative to propagate the DNA of ancient woodland 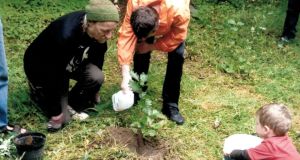 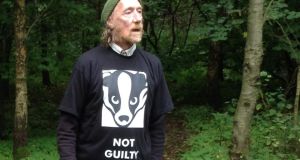 Down towards Gougán Barra, where the remote wilds of west Cork meet the gentle slopes of the Lee valley, Ted Cook’s home seems like a relic from a forgotten era.

A pheasant keeps sentry out front, unperturbed by visitors. Behind the gate, the grassy driveway looks like it hasn’t seen a car in a generation, if ever. It’s a sylvan idyll, nestling snugly in about an acre of mixed woodland.

Yet this quiet corner of Kilbarry, Co Cork, so rustic that you half expect Hansel and Gretel to come bounding down with cookies (five kittens do emerge), is at the cutting edge of an international campaign to help save Ireland’s forests.

At Cook’s house, in unprepossessing boxes, lie no ordinary trees. They are oaks. Moreover, these are no ordinary oaks. They contain the precise DNA of the last remaining aboriginal native sessile and common oaks around Ireland. In the US, where they were grown, they were grafted on to root stalks before being sent on to Holland and imported back home.

“The Archangel Project sent tree surgeons up to the tops of about 130 of all the oldest trees in Ireland,” says Cook, who co-founded the first community NGO in Ireland, the Macroom District Environmental Group, in 1984.

“The tops of these tree grafts are from the ancient oaks, and hazels, holly, and yew, which are all considered primary, in that they were never planted. I have them here now since early springtime. You could call them clones; we call it grafting.

“The best oaks I have that aren’t planted yet are the potted oaks from the Brian Boru, ” he says, referring to a huge live oak in Raheen, near Scarriff, Co Clare. It was reputed to have been planted by its namesake a millennium ago.

The saplings seem to be glowing with health, a bit like Cook himself, who is a sort of Gandalf figure and a repository of varied subjects, natural and supernatural, historic and prehistoric.He shows more saplings, these cut from the King Oak tree in Offaly, and also holly cut from the largest holly tree in Ireland (more than 8m in circumference), in Killarney.

The oak saplings have come via the Archangel Project, a worldwide effort to propagate the DNA of ancient forests, from ancient Ireland to ancient Greece.

As the oaks are direct descendants of the ancient Irish forests that flourished after the Ice Age, they contain the genetic material best equipped to thrive on our shores.

“We want to help Ireland reforest itself,” says project co-founder David Milarch, on the phone from Michigan. “It’s imperative to reforest the planet, and it makes sense to use the oldest, most iconic trees that ever lived.”

“The aim was to establish the sequoias in Ireland, should their natural habitat grow too hot as the climate changes,” says St Ledger. A wood sculptor from Dublin, he settled in Clare to be near ancient oak woods. “I started questioning, when I was younger: where are our forests?”

In their bid to revive aboriginal trees, St Ledger and Cook gather seeds from the final vestiges of virgin Irish forest. “We prefer seeds to grafting,” says St Ledger. “Myself and Ted have grown trees from acorns from the Brian Boru, but older trees don’t always produce viable seed.”

Scattered in tiny pockets around the country are the remnants of the post- glacial wild wood that covered much of Ireland for 9,000 years.

Due to repeated clear-felling following the Norman invasions, this unique resource now covers just 0.02 per cent of the country.

From these wooded remnants, the Woodland League hope to gather a seed bank. Together with their scientific adviser, botanist Diana Beresford-Kroeger, they are preparing a next year to urge communities to collect native tree seeds across Ireland, for future planting.

“These are trees that have evolved to deal with the consequences of climate change in a way that non-native species cannot do,” says St Ledger. “Having been in the one place for 1,000 years, they have remarkable DNA, adapted to this biozone. Each native tree has developed unique relationships with insects, mammals, plants and fungi.”

One source of this seed capital is the Gearagh (from Gaoire, or wooded river), a vast flooded plain near Macroom, Co Cork. Its small wooded pockets are all that remain of 600 acres of alluvial oak and ash forest, felled in 1954 prior to the Lee hydroelectic project.

Today, at low water, the Gearagh is an eerie oak graveyard, with tree stumps visible above the waterline. In one corner, at Toon Bridge, we find oak, holly and hazel, crabapple, wild cherry, bird cherry and, a rarity, buckthorn. “Before the ESB’s clear-felling there was also yew, which along with the salmon, never returned,” says Cook. “The yew is an important component of the wild wood.”

Just 10 per cent of our land is covered in trees, a fraction of the EU average, which is 37 per cent. Most of it is owned by Coillte. As a commercial operator charged with making the State a profit, Coillte’s aims naturally diverge from those of the Woodland League, which seeks to revive our native species.

Coillte says new planting is a policy decision for Government. Recently the Department of Agriculture announced its own new Forestry Programme 2014-2020. Designed to encourage more commercial logging, it also talks of conserving native woodlands, and, “where appropriate”, converting from conifer to native species.

With the UN’s IPCC advocating, in its fifth report, tree-planting to counter the ravages of climate change in Ireland and elsewhere, the Woodland League wants a long-term forest plan, not more logging.

“The actual percentage of native trees in Ireland is quite low, it’s around 1 per cent,” says St Ledger. “The authentic landscape of Ireland is western Atlantic temperate rainforest, dominated by oak. Most Coillte plantations are tree farms. Our hills are covered with exotic conifers that basically acidify the soil, don’t provide much of a haven for wildlife, and deny Irish people their cultural heritage.

“The Government have done little. They restored 13 native woodland sites that were on their property, through EU funding. Bravo. But we would say there’s no long-term management plan to secure them.”

With official policy in their view lacking, the group focuses on small-scale communal planting, usually with schools. One successful example is the “treestoration” of a former quarry in Broadford, Co Limerick, that had been used as a dump. Willow was used to clean up oil slicks, while native yew trees helped to deal with the asbestos. Today it is home to over more than species, plus a 30ft canopy.

“We are optimistic our native forests will return,” says St Ledger.

“It will be a slow process and will have to be mostly achieved by the people themselves. We are a forest people without a forest. But not forever.”

Ross O’Carroll-Kelly: ‘While I hate lying to him, that’s my job as a parent’
5

Why is Greta Thunberg so triggering for certain men?
6