Jennifer O’Connell: You’ll be sorry when the robot journalists take over

This year, computer software will produce more than a billion stories on the web. The majority will never be read, but in this era of McJournalism does anyone care? 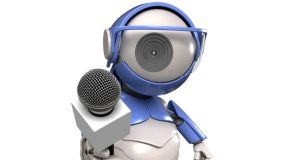 ‘Algorithms may be good at crunching numbers and putting them in some kind of context, but journalists are good at asking annoying questions.’ Photograph: Thinkstock

Here’s a question to test your knowledge of Leaving Cert English: who wrote the following poem?

Of fell foes infernal, and the king,

And the death of exiled heroes.

Did you guess it was from Beowulf? Yeats? Or are you completely baffled? Here’s a tip: there’s no point rooting out your copy of Soundings. The answer is that nobody wrote it. Technically, it is the copyright of Nathan Matias, a PhD student at MIT. Creatively, however, it is the work of a predictive text programme, very like the one used by your smartphone.

Matias is employing predictive text to write poetry for fun, but the idea of algorithm-generated content is deadly serious. If you consume much of your daily news diet online, you’re probably already acquainted with the work of “robot journalists”, you just don’t know it yet. We’re not talking here about Wall-E running around with a reporter’s notebook chasing stories on Amal Clooney (well, not yet), but about the algorithms used by organisations such as Forbes, AP and Fortune to produce millions of stories.

AP relies on a content generation package called Wordsmith to produce some of its quarterly-earnings business stories and will soon be using it for sports coverage too. You’ve never heard of Wordsmith but you’re probably familiar with its work: it produced 300 million stories last year and is aiming for one billion this year. A rival company, Narrative Science, provides content to Forbes, Fortune and others.

“We sort of flip the traditional content creation model on its head,” Robbie Allen, creator of Wordsmith told the New York Times. “Instead of one story with a million page views, we’ll have a million stories with one page view each.”

The cheerleaders for this new technology – who includes some journalists (New York magazine declared that “the stories that today’s robots can write are, frankly, the kinds of stories that humans hate writing anyway”) – claim that it will free journalists up to do more meaningful pieces, while algorithms churn out rewrites of press releases, mine longer texts for insights, or produce entirely personalised packages of content tailored for individuals.

That’s nonsense. As always, “freeing people up” invariably means “liberating them of their jobs”. But leaving aside the prospect of fewer people in employment, the notion that algorithms may end up taking over even the quotidian aspects of content production is depressing, and not just for journalists.

Part of the problem is the phrase I’ve just used: content production. Old-fashioned expressions such as “journalism” and “writing” have given way to the more efficient, shinier “content production”. It’s a useful way of describing what multi-platform journalists do. But “content production” suggests something cheap and easily replicated, words that slide off a production line like McDonald’s burgers. Yeats, Hemingway or Behan weren’t “content producers” any more than your mobile phone’s predictive text software is a poet (although even that may now be up for debate).

This isn’t just another whine from a journalist on the state of this troubled industry. Well, maybe it is. Journalists in every organisation are already under pressure to produce more for less. I was recently offered a freelance job writing content for a US-based website. Each piece would have taken most of a day and some travel to research, and a couple of hours to write. The pay was $50 per piece, expenses included.

As the bottom continues to fall out of their pay packets, journalists will move on to other things. Graduates with communication skills, tenacity and a curiosity about the world, who might once have chosen journalism will, if they’re wise, pursue other careers. I know what I’ll be advising my children to do should they show an interest in my career path: find a different one.

As a news consumer, you may not care whether the copy you read was produced by a robot in 0.01 of a second, or by a human in half a day (for $50), if it tells you what you need to know. You may not care that the humans in my industry are being replaced by robots – although yours could be next. But in the end, it’s you, the reader, who will suffer. Algorithms may be good at crunching numbers and putting them in some kind of context, but journalists are good at noticing things no one else has. They’re good at asking annoying questions. They’re nosy and persistent and willing to challenge authority to dig out a story. They’re good at provoking irritation, devastation, laughter or controversy.

Wildly efficient robot journalists may offer hope to an industry beset by falling advertising rates and disappearing readers. The world will have fewer human journalists as a result, which may not be altogether a bad thing. But the question is: does it really need a billion more pieces of McJournalism?

U2: not the worst of them

It’s easy to be cynical about U2; they preach about global poverty, they avoid paying taxes in Ireland, they fall off bikes and stages, and Bono can seem pompous. But it was hard to be anything but swept away at the opening night of the US leg of the band’s Innocence and Experience tour, in San Jose last week. This is a group that still cares about what it does and knows how to get a room to its feet. The undoubted highlight was a down-tempo version of Sunday Bloody Sunday performed against a backdrop of images of victims of the Troubles. It was a strong and moving image whose resonance might have been lost on some of the audience – which, conversely, made it all the more powerful for those of us on whom it wasn’t lost.